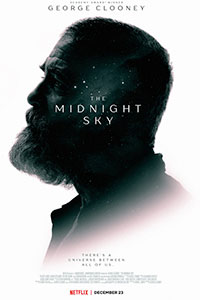 Ponderous but hollow, The Midnight Sky is a movie with noble intentions and inspired influences, yet it feels lifeless from start to finish. Based on the 2016 novel Good Morning, Midnight by Lily Brooks-Dalton, it was directed by George Clooney for Netflix. The streaming service debuted the $100-million production just before the holidays, meaning they seem to have confidence in the movie’s all-star cast and familiar genre trappings. It features a bankable star, Clooney, navigating a last-man-on-Earth scenario, while a crew of several more familiar faces gets stranded in space. Dealing with themes of isolation, environmental responsibility, and personal accountability, The Midnight Sky should resonate in today’s world of pandemic seclusion and global warming. Then why does it feel so empty? It seems to lack a certain je ne sais quoi that gives similar movies a crucial touch of energy, passion, and personality.

The same could be said of Clooney’s last two directorial efforts, The Monuments Men (2014) and Suburbicon (2017). Both films have incredible casts and promising storylines driving them, but they never click, leaving the hopeful viewer disappointed by the missed opportunity. Beginning with his directorial debut, Confessions of a Dangerous Mind (2002) from a Charlie Kaufman screenplay and starring Sam Rockwell, Clooney showed promise as a filmmaker, even if he tended to look too closely at other directors (like Steven Soderbergh) for visual input. His best film, Good Night, and Good Luck (2005), a portrait of early television journalism standing up against McCarthyism, showed that he had something to say and the talent to back it up. He followed it with the underrated football farce Leatherheads (2008) and The Ides of March (2011), a cutting indictment of America’s political system. But after his first few confident projects, Clooney has stumbled. He’s trying too much and not delivering, and with The Midnight Sky, he continues to flounder.

The movie’s structure is the most compelling thing about it. The screenplay by Mark L. Smith (The Revenant, Overlord) establishes one storyline, switches to another, and brings them both together in the end. Clooney plays Augustine Lofthouse, a scientist who has terminal cancer. When an unexplained event causes most of Earth to become uninhabitable, Augustine resolves not to take an off-world shuttle and, instead, remains behind at an Arctic station, working on his beard. While there, he discovers that a young girl, Iris (Caoilinn Springall), has been left behind. He also learns that a space shuttle, cruelly named Aether, is returning to Earth from a long exploratory voyage. The scientists aboard have no idea that their home planet is unlivable, and Augustine resolves to warn them. But since his radio isn’t working, he packs up Iris and sets out across the frozen, desolate landscape to reach a nearby base with a working radio—a strain resembling The Road (2009). Along the way, Iris’ presence prompts an influx of personal regrets involving his estranged daughter, which are captured in a series of heavy-handed flashbacks with Ethan Peck playing a younger Augustine, except with Clooney’s voice. 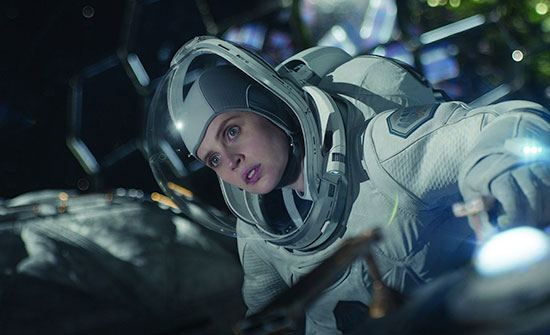 Meanwhile, in space, the Aether crew returns from a mission to one of Jupiter’s habitable moons only to learn their planet can no longer support them. Tom (David Oyelowo) commands the ship of mostly personality-less characters, including Sully, played by Felicity Jones, who discovered she was pregnant during the production, prompting Clooney to work that detail into the story. On the periphery are Maya (Tiffany Boone), Sanchez (Demian Bichir), and Mitchell (Kyle Chandler). Only the homesick Mitchell carries any weight, especially when he learns the long-awaited reunion with his wife may never happen. Despite the talented cast here, the crew dynamic never feels genuine or natural, and the usual obstacles—space debris causes damage to their ship, requiring a spacewalk to fix it—lack suspense. Only when one character learns they were injured in deep space do the characters start to seem like human beings.

If this setup is any indication, The Midnight Sky is also the sort of movie best described with the “meets” formula: it’s Gravity (2013) meets Interstellar (2014) meets The Martian (2015) meets every other post-apocalyptic or soulful space drama from the last decade or so. Clooney uses an aesthetic that does little to set itself apart from these titles, as though his production team copied from a lookbook of sci-fi greats from the 2010s rather than use them as inspiration. It’s all competently made, of course; as usual, Clooney has a solid understanding of film grammar. Cinematographer Martin Ruhe offers attractive images of an Arctic blizzard, stunning looks at the night’s sky, and some slick space sequences. However, if you’re familiar with the aforementioned influences on Clooney, it will prove difficult to watch The Midnight Sky without thinking of them. Clooney borrows from the best, but in a way that renders his movie unmemorable—like putting all of your favorite colors into a vat and mixing them, resulting in a brown-gray goop.

Worse, Clooney overemphasizes every emotional beat, even ones that should feel nuanced. At one point, his inward and crumbling character shares some food with Iris. “I prefer these,” he says, popping some painkillers. Subtle. It doesn’t help that Alexandre Desplat’s score pounds the meaning of each scene into our eardrums, from the rambunctious, airy notes that accompany Augustine and Iris’ playful initial encounters to the booming, heroic moments that overemphasize Augustine’s survival in the wilderness. For a movie that seems to respect the restrained feelings of its characters, Clooney allows Desplat to communicate too much, leaving little for the viewer to mull over. Elsewhere, he doesn’t give enough, including a satisfying conclusion for any of the characters. Such narrative ambiguity might have been appreciated had the movie practiced some restraint early on (with a little less oomph on the score, perhaps), but the production’s emotional tenor never quite justifies the open-endedness.

Competently made and boasting a terrific cast, The Midnight Sky is watchable but instantly leaves the mind. What’s frustrating is how the viewer can see the potential here. It’s easy to understand what Clooney saw in the project and how it might have been better. After months at home in isolation, I could relate to Augustine’s despair in the opening scenes, even if it was conveyed in hackneyed scenes of Clooney drinking, stumbling around the station, and splashing water on his face. The rest of the characters feel like plot elements, rarely more. Regardless of how potentially relatable or thematically rich the material may be, Clooney never distinguishes his movie from its betters, never breathes life into the well-worn ideas. If nothing else, The Midnight Sky made me want to revisit the long list of superior titles that it brings to mind—particularly the more affecting and artful remake of Solaris (2002).