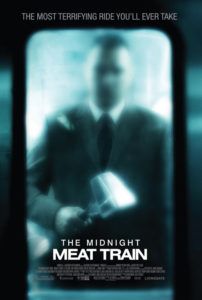 “You’ll understand soon enough,” says the ominous conductor of The Midnight Meat Train. But you never will. Clive Barker of Hellraiser and Nightbreed fame wrote the short story, so you can be sure there’s plenty of peculiar mythology laden with gory details: people are smashed apart, dissected, and strung up in all manners of nastiness; others are driven nutty by the infectious madness of the city. It’s as if H.P. Lovecraft and Charles Baudelaire got together for a hammy horror movie.

The film’s tone is severe, handled with the utmost seriousness in every scene, so why was I laughing? Because here’s a movie with a novel concept so poorly written for the screen by Jeff Buhler, and so over-directed by Ryuhei Kitamura, that the moody plot can’t help but be seen as campy and senseless. Indeed, the title references an underground subway whereon each night people go missing, beaten and slaughtered by a crazed butcher (played by Vinnie Jones in an almost completely silent role) with a large, square-headed stainless steel hammer. From here on out I’m going to call this otherwise nameless character Mr. Butcher.

Mr. Butcher’s nefarious mid-night murders are witnessed by a struggling photographer named Leon (Bradley Cooper), who heads into the subway system looking to capture “the real” city on camera for a snobby art dealer (Brooke Shields). Unfortunately for him, all he finds is shocker-flick clichés and computer-generated blood. (Note: I stress “mid-night” versus “midnight” since the movie makes of point of telling us Mr. Butcher kills mostly around 2 a.m. Why is the title The Midnight Meat Train? Probably because it sounds better than Just After Midnight Meat Train or Two-in-the-Morning Meat Train.)

Much to the chagrin of his girlfriend (Leslie Bibb), Leon becomes obsessed with the killer, following him and doing all those things in scary movies that make you want to yell “You Idiot!” at the screen. His behavior is erratic, even violent—a devout vegetarian, Leon begins to desire meat, licking the grease from a friend’s plate like an animal. He follows his mysterious target way too close and eventually gets himself spotted. Mr. Butcher’s menacing glares of recognition are delivered via moody head-turns so slow a snail could dodge them. Not that it matters. Leon is such a nitwit that he’s incapable of reacting fast enough. Chases ensue, but all action is reserved for the train.

There’s something more going on with Mr. Butcher beyond your run-of-the-mill subway murderer. Take the scene where he stands before his bathroom mirror with a blade and exposes his chest. Covering him are dozens of nipply wart-like growths, several of which he cuts off and places in a jar, which he then situates in his medicine cabinet where there rests jar upon jar of sawed-off nipple-warts. This is never explained. It’s one of the strangest, most pointless scenes in a movie I’ve ever seen.

I am now going to explain what The Midnight Meat Train is all about, if only to illustrate for you how dull this movie ends up being. If you’re wholly adverse to spoilers, skip ahead to the next paragraph. Though it shouldn’t really matter. After all, it’s not as though I’m divulging any great secret of the cinema… As it turns out, Mr. Butcher works in association with a group defending underground demons living there since the dawn of time. Each night the subway parks in an abandoned station; the slimy creatures emerge to feed on the butcher’s victims. Oh, and Leon’s obsession? A symptom of the demons’ control over him; they’ve chosen him to continue killing innocents as livestock. This begs the question: If these demons, or whatever they are, have been in control for so long, why couldn’t they find better quarters than a dank subway station?

This movie has been sitting on the shelves at Lionsgate for months, and probably should have been a direct-to-DVD release, but somehow it earned a limited theatrical run. Awkward editing and a mish-mash of ideas take over for Japanese horror filmmaker Kitamura’s fluid camera movements and metal-hued images. Some ideas make sense, others remain vague allusions, and others still are altogether nonsensical—all of it is awash by Barker’s penchant for humorless characters sopping with melodramatic relationships (not to mention gallons of blood). When moviegoers in my screening should have been cringing, they were laughing. How could they not, when Barker insists that we take his concept as gravely as he does, despite the inherent silliness of the plot? Kudos to you if you can take a movie called The Midnight Meat Train seriously. I can’t.