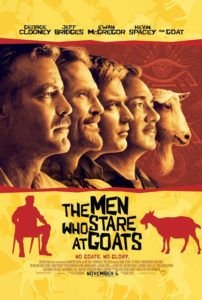 The Men Who Stare at Goats makes for an unusual 93-minute comedy that’s entertaining enough for the duration. An adaptation of British journalist Jon Ronson’s 2004 nonfiction book, the movie has a lighthearted tone that brings some welcomed humor to the dark subject of the Iraqi conflict. It has hilarious performances by George Clooney and Jeff Bridges, both acting their goofily best. And it contains enough absurdist wit rooted in the paranormal to make it an offbeat farce. What it doesn’t have is meaning or substance.

Ronson’s book explored a time in the 1980s when certain figures in the U.S. military began researching how to fight the wars of the future in non-lethal ways. Here are the facts: The First Earth Battalion, New Earth Army division began teaching soldiers, who call themselves Jedi Warriors, to exercise their minds and explore their inner potential. Psychic combat, telekinesis, remote viewing, invisibility—that sort of stuff, hence their catchphrase “Be All You Can Be,” which evidently stuck with the army’s marketing department. This weird pseudo-hippie psy-ops offshoot eventually fizzled out, but their methods were later twisted into interrogation and torture techniques in Iraq. Perhaps you remember hearing about prisoners being subjected to a constant barrage of strobe lights and Barney the Dinosaur songs.

Airy as foam and just as bubbly, the movie takes a potentially ripe subject and squanders its could-be commentary on quirky laughs. Our entry point is lowly reporter Bob Wilton (Ewan McGregor), who heads to Iraq to prove himself to his estranged wife and becomes entangled with Special Forces psychic spy Lyn Cassady (George Clooney). The bug-eyed Cassady tells Wilton all about his former top-secret unit, started by unconventional officer Bill Django (Jeff Bridges), a soldier-turned-longhair who believes flower power and dancing will open the Third Eye. Wilton tags along with Cassady on a vague mission into Iraq, observing as Cassady bursts clouds with his mind, using those ambiguous “Jedi” powers of his—a wink directed at moviegoers who remember McGregor played Obi-Wan Kenobi.

Their aimless trek through the desert is endlessly interrupted by flashbacks, and flashbacks within flashbacks, describing the origins of Cassady and his bizarro unit. Enter Larry Hooper (Kevin Spacey), a science-fiction author-turned-psychic-spy who takes control of the New Earth Army and forces Cassady to stare goats to death. You’d think all of this would lead to something, to some sort of goal or conflict for the characters to overcome. Some lesson learned, perhaps. But in the end, there’s no point to any of it. Drugs are taken. Goats fall over. Clooney and Bridges behave like part-madman, part-genius. McGregor is the straight man whose character narrates it all. But screenwriter Peter Straughan never makes it all come together.

Directed by first-timer Grant Heslov, a frequent actor and longtime collaborator with George Clooney, the movie’s tone never leaves cheeky territory. A landmine is used as a punchline. Things never get grim and reality absolutely never seeps in. Stakes are never set. There’s an emotional distance between everything that happens in this movie and the audience. It’s chaos onscreen. Much of it is very funny. But the movie seems set on pointing to the oddity of this military unit as its entire basis, never exploring beyond that or questioning the implications in any serious way. For Heslov, being wacky is enough.

Being a satire that doesn’t actually satirize anything, Heslov’s movie never amounts to much besides some laughs. And that’s just fine. The movie aimed to be funny, and it was. But it could have been so much more. Just ten years ago Clooney starred in Three Kings, the hilarious Iraq War actioner by David O. Russell that wasn’t afraid to tread dark territory and have a purpose. Given the subject of The Men Who Stare at Goats, there’s an obvious but barely tapped allegory for the insanity of war and those who support it. The movie just wasn’t bold enough to be funny and still acknowledge some very apparent issues waiting to be addressed, and that’s disappointing.