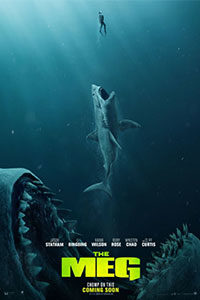 The Meg presents a fascinating case study for marketers. The promotional department at Warner Bros. created a series of winking trailers, which advertised self-aware schlock in the tradition of summertime killer fish movies. If Steven Spielberg’s Jaws (1975) elevated B-movie material to the status of art, and Joe Dante’s Piranha (1978) rethought Spielberg’s film on a Roger Corman budget, then The Meg spent tentpole dollars on something only slightly better than the lowbrow 2010 remake of Dante’s film, Piranha 3D. The trailers for The Meg promised a fun, post-modern experience, something that played with the absurdity of its setup, wherein a gargantuan prehistoric shark is unleashed from the bottom of the ocean. The ads promised a somewhat less ironic Sharknado, while also catering to viewers well-versed in Shark Week and SyFy Channel programming. However, the marketers were in on a joke that the movie was unaware of, and the oddly self-serious result proves that a sharp promotional campaign can sell a project that operates on an entirely different level than advertised.

Usually, it’s not difficult to accept the chasm that exists between a movie and its marketing campaign. It’s simply a matter of not letting your expectations get the best of you. But The Meg‘s trailers advertised the movie this should have been, while in reality, the experience is a dry, predictable affair with a flatly straightforward tone. Based on Steve Alten’s best-seller, Meg: A Novel of Deep Terror from 1997, the long-in-development production has taken over twenty years to reach the screen. The co-production between Hollywood interests and Chinese investors dropped a budget reportedly north of $175 million to bring this wholly inessential story to moviegoers, spending much on its international cast and challenging water shoot. The script (by Dean Georgaris, Jon Hoeber, and Erich Hoeber) was captained by Jon Turteltaub, director of everything from 3 Ninjas (1992) to several Nicolas Cage vehicles, including the National Treasure movies.

The Meg begins with a prologue with no sense of space, setting, or situation. Jonas Taylor (Jason Statham) rushes through narrow passages inside two underwater crafts. Amid red warning lights and the screams, Jonas tries to pull injured men to safety. But then one of the crafts begins to buckle, or something, and Jonas makes a tough decision to abandon two crewmembers in order to save the others. After an explosion, it’s unclear what just happened. Only through the conversations of other characters does the audience understand what occurred here: It’s your basic Cliffhanger scenario, where the script establishes a tragedy in the first scene, which of course our hero will overcome later on. Jonas believes they were attacked by a giant undersea creature during a deep dive rescue of a submarine crew, and officials think he’s crazy. Years later, Jonas has lost himself in alcohol somewhere in Thailand. And sure enough, a situation arises, requiring Jonas to try another deep-sea dive to save the day and earn redemption.

An old pal, Mac (Cliff Curtis), accompanied by the marine biologist Zhang (Winston Chao), visit Jonas and convince him to perform another rescue mission. His ex-wife (Jessica McNamee), among others, has been struck by something in the deepest minisub dive ever. Their project, funded by an eccentric billionaire (Rainn Wilson), sought to explore below the bottom of the Marianas Trench, where the lowermost points were proved to be an icy, gaseous surface. Beneath this shell is an oceanic world undisturbed since prehistoric times, where giant squid and the title’s dreaded megalodon dwell. Of course, when Jonas carries out his rescue mission, he inadvertently unleashes a dinosaur-sized eating machine that makes Bruce from Jaws look like a minnow. Helping Jonas track and destroy the monster from the deep are a cast of familiar types: Jaxx (Ruby Rose), the tattooed techie with too much mousse in her hair; DJ (Page Kennedy), the token African American character reduced “I can’t swim” jokes and “Aw, hell no”-type lines; and Suyin (Li Bingbing), Jonas’ romantic interest, whose eight-year-old daughter Meiying (Sophia Cai) provides some cute exchanges with Statham’s leathery hero.

James Cameron would have a field day with The Meg’s disregard for scientific detail concerning matters of pressure, as characters descend farther into the abyss than anyone has ever traveled, and then reemerge at the surface without any concern for pressure. Certainly, someone should have exploded, or at least had decompression sickness. And then, at one point, Jaxx describes the prehistoric shark as “a living fossil,” which nonsensically evokes the image of an enormous moving rock. Turteltaub is more concerned with providing situations where the characters find themselves inside an impenetrable shark cage or minisub, which inevitably the megalodon secures in its jaws, trying to swallow our heroes like a capsule. He also creates familiar, pandering scenes on overcrowded beaches, where the meg lurks beneath the surface and watches swimmers, as if checking out the buffet. As always, this killer fish movie fails to answer some essential questions to justify the high body count: After eating dozens of victims, doesn’t the shark ever get full? And if so, why does it keep killing? Is it a psychopathic shark, killing for sport?

The movie contains notes of Deep Blue Sea (1999), complete with CGI sharks and copious PG-13 gore, but it also cares more about the characters than we do, making for cringe-worthy scenes of mourning. After characters die, The Meg takes the time to grieve, extending the runtime to a bloated 113 minutes in a gross overestimation of its audience’s involvement. Aside from Jonas, Suyin, and Meiying, the characters are nothing more than shark bait. The script doesn’t earn the audience’s affection for anyone else, making several sequences in the movie drag. At the same time, the overall lack of humor robs the viewer of escapist fun. Somewhere in the available footage is a brisk, 88-minute thriller that realizes its commercial ambitions without pretention, but The Meg remains neither lowbrow enough to be entertaining nor elevated enough to place it on the mantle next to Spielberg and Dante’s work in the genre.