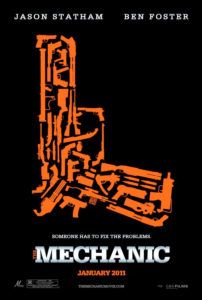 Someone over at CBS Films likes their badass action movies. The production company behind last year’s Dwayne Johnson vigilante vehicle Faster is distributing another R-rated actioner, this one a remake of a Charles Bronson favorite from 1972. The original version of The Mechanic contained that brutal 1970s edge which made sense with Bronson onscreen. Bronson titles like Death Wish and The Stone Killer contained unforgiving morality, yet somehow their narrow principals could be forgiven because the actor was just so damn cool. But now, with director Simon West’s remake, it becomes apparent that apathy no longer makes for an admirable protagonist, or even a dynamic one. That is, at least not one played by Jason Statham.

The setup of The Mechanic finds Statham in a familiar role playing Arthur Bishop, the top hitman to a company that deals in death. As a coldly efficient killer whose silence conveys a predictable toughguy persona, he’s basically motivated by the same principles as Statham’s driver in The Transporter franchise. You know the type: They live a solitary lifestyle, say little, and smile even less. They enjoy random, gratuitous sex with local prostitutes. And they talk endlessly about their personal codes which have kept them alive, but then at every turn they break their own rules. Why? Because the screenwriters demand it.

Arthur never questions the reasons behind his assignments; he simply executes them with unswerving professionalism, even if he’s instructed to kill a friend. When he’s told that his mentor, Harry McKenna (Donald Sutherland), has betrayed the firm of killers, Arthur accepts a contract on Harry from Harry’s former partner, the slithering Dean (Tony Goldwyn). After completing the mission, out of sympathy Arthur takes on Harry’s son, Steve (Ben Foster), as a hitman trainee. Botching a number of jobs during the learning process, Steve displays a taste for violence, something that’s concerning for everyone. And after some more superfluous sex scenes and pointless kills, Arthur and Steve plan to take out Dean, who is the bad guy, of course.

Aside from the movie’s overall callous tone, the plot structure feels formulaic and far too predictable, even for a remake. Viewers familiar with the Bronson original will note that the two plots differ a great deal, in that the original was less ambiguous about Steve’s desire to avenge his father’s death by killing Arthur. Yet screenwriters Richard Wenk and Lewis John Carlino stick to a paint-by-numbers scenario outlined by 1970s action movies. The only questionable element is the finale, in which Arthur and Steve eliminate the movie’s villain without much resistance at all, leaving the final shootout feeling like a missed opportunity for thrills.

Instead, directing like a rookie, West makes poor choices as both technically and as a storyteller. Having helmed cornball actioners like Con Air and Lara Croft: Tomb Raider in the past, West should know better than to permit his editors T.G. Herrington and Todd Miller to carry out the kind of jumbled mess on display here. His earlier movies were at least watchable, whereas The Mechanic, in its chopped and heavily filtered form, proves unintelligible. Action sequences progress and the viewer has no idea how the hero got from Point A to Point B, how many bullets have been fired, or how many thugs have been shot. It’s all assembled with fast motions and loud noises to create the illusion of action, but without a shred of coherency.

None of this should surprise you, however, not after learning Statham was involved. The last time the actor displayed any real potential was more than a decade ago, just after the actor made his debut in Guy Ritchie’s Lock, Stock, and Two Smoking Barrels and was just finishing that director’s follow-up, Snatch. Seven years and a number of mediocre titles later, and Statham gave up on making good movies altogether when he appeared in Uwe Boll’s abysmal In the Name of the King: A Dungeon Siege Tale. Nowadays, The Mechanic feels right in line with Statham’s underwhelming output, his potential exhausted beyond recovery. The actor has completed another sleepy performance in another movie whose low-budget will generate mild profits, continuing the cycle that won’t be broken until Statham makes a concerned effort to give a damn.