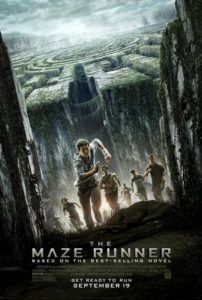 Undone by a third act dependent on a cryptic, Twilight Zone-esque twist, The Maze Runner‘s voyage into the familiar YA post-apocalypse proves surprisingly dark but ultimately unsatisfying. Meant as the first chapter in a franchise trilogy, this adaptation of the 2007 novel by James Dashner alludes to secrets and conspiracies left unresolved onscreen, hoping viewers will turn it into the next phenomenon like The Hunger Games or Divergent. And while first-time director Wes Ball delivers an intriguing and fast-paced first half, interest is lost once the film’s mysteries are finally answered by enigmatic clues and an open-ended resolution to the central conflict. Despite strong performances and a fascinating setup, it feels like a typical episode of Lost in which more questions are asked instead of answered—except here, there’s no promise of a new episode next week.

The opening starts with a bang. Delivered by an underground elevator, a teenager named Thomas (Dylan O’Brien) arrives in a place called the Glade, a squared-off piece of land with trees and fields. Thomas is greeted by the Glade’s inhabitants, a few dozen other teenage boys who, calling themselves Gladers, live a Lord of the Flies lifestyle (there’s even a Piggy stand-in named Chuck, played by Blake Cooper), and welcome Thomas as a greenie. Every month like clockwork, a new greenie is delivered from who-knows-where into this prison habitat. Every new teen arrives as an amnesiac, with no knowledge of his previous life except his first name, and that only comes back after a couple days. The Glade is surrounded by the towering walls of the Maze, whose doors open every morning and close every night. Boys called runners traverse the Maze by day to look for a way out, but no one stays in overnight and survives, thanks to huge biomechanical spider-things called Grievers.

As Thomas acclimates to his surroundings, he begins to question why there’s not more of an active effort to escape. The longest resident, the Gladers’ leader Alby (Aml Ameen), seems content to explore but demands order in his makeshift village. His deputies, the sympathetic Newt (Thomas Brodie-Sangster) and bullying Gally (Will Poulter), have opposing views, especially the latter, who calls the Glade “home” and never wants to leave. But Thomas begins to break Alby’s rules and explores the Maze, and when he proves himself by surviving a night in there and killing a Griever, the film takes a turn into The Mist territory—some believe they should journey into the unknown and escape, no matter the cost; others demand obedience, violently, and go mad when their supposed safe haven is threatened. Matters get worse when Teresa (Kayla Scodelario) arrives as the first girl in the Glade, and she comes with a note saying she’ll be “the last one ever”.

Before long, all order breaks down, the Grievers attack the Glade, Gally demands an “offering” to whoever put them there, and Thomas leads an all-out revolt. And though The Maze Runner‘s audiences will sort of learn who put the Gladers in the Maze, they won’t learn why. By design, the cliffhanger ending shows us images that allude to a larger, more complicated world outside of the Maze that remains unexplored. The producers hope this will be enough for audiences to demand a sequel (Dashner’s book was followed by The Scorch Trials and The Death Cure, and a prequel called The Kill Order). Except, our brief glimpses are little more than crumbs, too formless and unsatisfying to serve as a meal. And perhaps the book’s readers (a group of which this critic is not a member) will better appreciate such a finale, knowing where the series will go next; non-fans will be left feeling robbed of a satisfactory resolution, however.

The Maze Runner pushes its PG-13 limits with plenty of death and swearing (“shit” is the film’s word of choice), and the plot-driven thrust of the film entertains well over the halfway point. But once the core mysteries begin to fade, we gradually lose interest. For example, the idea of Grievers is much scarier than the poorly rendered CGI monsters that appear onscreen. Ball, who runs his own special FX company, relies on Dan Zimmerman’s choppy editing and Enrique Chediak’s shaky camera movements to distract from the unimpressive beasties (though goopy practical effects are used to depict a dead Griever’s insides). The Maze itself is remarkably realized, as are a number of the characters (O’Brien makes a strong hero). Still, any involvement in the proceedings is lost once the screenplay (credited to Noah Oppenheim, Grant Pierce Myers, and T.S. Nowlin) delves into outright exposition and ends abruptly with all but flashing “to be continued” on the screen. As a whole, the outcome is diverting but, in the end, incomplete.