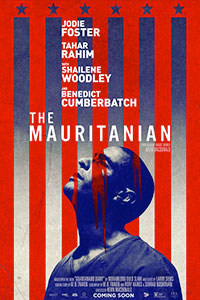 Imagine that the U.S. government detains you in Guantanamo Bay for several years of interrogation. You haven’t seen or heard from your family, and you live in a small cell without a window. Before long, your captors transition from traditional interrogation methods to “special measures” that include eighteen hours of daily strobe lights, heavy metal blasted at high volumes, prolonged stress positions, waterboarding, sexual humiliation, rape, and threats that your mother would be detained and gang-raped. How long could you endure this treatment? How long before you would say or sign whatever you must to make it stop? That’s the case of Mohamedou Ould Slahi, who was arrested after 9/11 for allegedly recruiting the hijackers. Though the U.S. government had no concrete evidence of their accusation, they procured a confession from Slahi after prolonged torture. The Mauritanian tells Slahi’s story amid some controversy; after all, it’s a decidedly unpopular choice to defend anyone accused of terrorism. But the greater issue at play for director Kevin Macdonald and Slahi’s defense attorney Nancy Hollander, played by Jodie Foster, is how the government’s choice to detain and torture suspects at “Gitmo” remains deeply unconstitutional.

Based on Slahi’s 2015 memoir, Guantanamo Diary, the film isn’t likely to earn much love in the United States, where a gut reaction to seek vengeance in the wake of 9/11 has justified all manner of moral and legal compromises. Disagree with the motivations behind extraordinary rendition or the Iraq War, and one risks being branded a traitor in some circles. That’s what happened to Hollander and others when they looked closer at the evidence, or lack thereof, against Slahi, and the records of his treatment approved by the Secretary of Defense, Donald Rumsfeld. The film’s challenge is to overcome an innate emotional response to Slahi’s situation and approach the problem from a place of moral and legal responsibility. Slahi once received a call from his cousin who used Osama bin Laden’s satellite phone; Slahi also trained with al-Qaida, albeit alongside American forces against the Soviet Union in Afghanistan. But America has a short, selective memory when it comes to the past, so any mention of al-Qaeda faces harsh scrutiny under the Bush administration’s desire for “rough justice.” In any case, this was enough for the U.S. government to hold Slahi for fourteen years, during which time they failed to produce any uncoerced evidence.

When the film opens, it’s two months after 9/11, and Slahi (Tahar Rahim) finds himself taken from a family wedding and delivered to Guantanamo Bay detention center. There, he’s questioned and prevented from contacting the outside world, though he remains a genial character, willing to relate to his captors and fellow inmates. (Rahim, who gave a stellar performance in 2009’s A Prophet, proves he’s an underseen presence in American cinema.) Meanwhile, Hollander, a humanitarian attorney who has made a career out of raising questions about whether the U.S. adheres to international and military law, learns about Slahi’s case several years later. She enlists Teri Duncan (Shailene Woodley), a young associate who speaks French, to assist in building her case. But at every turn, uncooperative and secretive government agencies supply Hollander and Duncan with absurdly redacted documentation and a decided lack of evidence. What’s curious is that the military prosecutor in Slahi’s case, Lt. Col. Stuart Couch (Benedict Cumberbatch), a man desperate to bring anyone involved in 9/11 to justice, faces a similar challenge in his desire to view the content of MFRs (memoranda for the record), which reveal a detailed log of Slahi’s treatment. 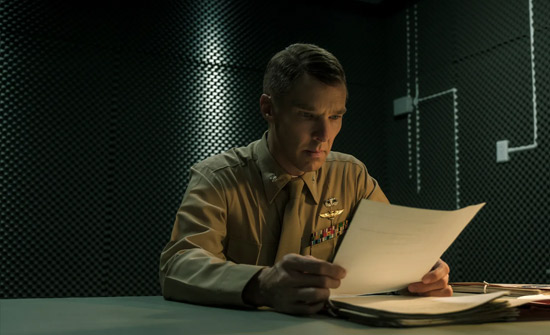 By this time, the film has been effective in establishing some doubt about Slahi’s innocence, using a structure that reveals the layers to Slahi’s life and how everything isn’t as black-and-white as the U.S. military would like to believe. Eventually, the screenplay by M.B. Traven, Rory Haines, and Sohrab Noshirvani inserts a drama-with-a-capital-D moment where Couch, attending Sunday services, realizes that Slahi hasn’t been treated with Christian dignity and forgiveness, leading to the heightened moment where he resigns. This is a broad scene in Macdonald’s hands, but not altogether unsurprising. When he’s not making documentaries (such as Touching the Void and Whitney), the director often resorts to middlebrow fare ranging from The Eagle (2011) to Black Sea (2014). The most sincerely touching moments of The Mauritanian come in the final scenes over the end credits, when Macdonald shows the real Slahi enjoying his eventual, hard-won freedom. He appears all smiles with nothing but forgiveness for his captors. Would you be so forgiving if you were detained for fourteen years?

Macdonald is a capable filmmaker with a straightforward yet indistinct visual approach. Consider how he and cinematographer Alwin H. Küchler structure the various leaps through time in The Mauritanian. The present-day scenes appear in a standard widescreen aspect ratio, adopting the contemporary look of shallow focus close-ups and drone establishing shots. For the scenes recollected by Slahi, the frame switches to a boxier Academy Ratio, conveying his sense of confinement in Guantanamo Bay. The angles become more surreal, captured with wider lenses, as though Slahi is living through a nightmare. The film also employs flashbacks-within-flashbacks to represent Slahi’s memories and sometimes hallucinations, recalled through a hazy series of soft-filtered and desaturated imagery. These visual choices demarcate three distinct levels of time and allow the viewer to keep the film’s various leaps clear. Still, they’re also predictable choices that feel broadly handled and accented by Tom Hodge’s emotive score, clearly placing the viewer in Slahi’s subjectivity. A more objective formal treatment might have tested the viewer’s moral position on the issue, though it would have risked losing the unconverted viewer.

In one of the only interactions between Hollander and Couch, she points out, “They built this place out of the reach of the court for a reason.” She later realizes that it’s not only to keep a tight grip on the 779 prisoners detained at Guantanamo Bay, but it’s also to protect the interrogators from having to answer for their methods. Of course, terror suspects have rarely received fair treatment from Americans, who approach the accused with a “someone has to answer” mindset—and that someone can be anyone. Films like Errol Morris’ Standard Operating Procedure (2008) and The Report (2019) have uncovered the dehumanizing tactics of the U.S. military with the factual detail of an exposé. But The Mauritanian attempts to put a human face on the issue, offering a convincing portrait of Slahi as a person who, despite an imperfect past, was unjustly held and oppressed. The film reveals how it’s easy to look at suspected terrorists as non-humans whose torture might prevent the next 9/11. But as the maxim (often misattributed to Gandhi) goes, “An eye for an eye leaves the whole world blind.”