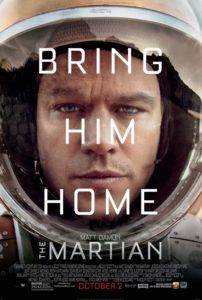 In Byron Haskin’s gem Robinson Crusoe on Mars, an astronaut stranded on the red planet with a chimp must dodge fireballs and breathe shallow in the (nonexistent) atmosphere; later, he finds water sausages to eat and air crystals to inhale. That’s what 1964 science-fiction gets you: a fun, escapist lark. Director Ridley Scott’s film of author Andy Weir’s 2014 best-seller The Martian, a hard-science-fiction yarn adapted by screenwriter Drew Goddard, avoids any such fantastical notions, although it’s surprisingly fun. It’s just a man, stranded alone on Mars, with no chimp or companion named “Friday” to speak with, eager to survive by his wits and scientific mind. Fortunately, the ever-affable Matt Damon plays that man, in one of his very best performances. Goddard, whose only directorial effort was 2012’s The Cabin in the Woods, originally planned to direct but bowed-out, releasing the project into the far more prestigious hands of Sir Ridley. The result is a fascinating picture that uses real science and Damon’s charm to cleverly reclaim interest in the U.S. space program, currently in moratorium.

Scott’s previous journeys into space have been nothing short of awe-inspiring, from his original 1979 Alien to his visually sumptuous (if narratively clumsy) sorta-prequel Prometheus in 2011. But his usual visualist’s saturation doesn’t impede the forward-momentum of the story, which begins with a storm on Mars that forces the NASA crew of the Ares 3 to abandon their mission after just 18 “Sols” (solar days, meaning Mars’ complete rotation around the Sun), and in the process, they inadvertently leave behind their botanist, Mark Watney (Damon), thinking him dead. Impaled by an antenna and cut off from communicating with Mission Control, Watney must “science the shit” out of his situation to survive, given that the next manned mission to Mars, the Ares 4, isn’t scheduled to arrive for 4 years. With nary enough rations to survive that long, Watney must somehow find a way to grow food, produce water, and provide himself with life support. However, along the way, he encounters no end of small challenges, each one more fascinating and perilous for him to overcome than the last.

Damon, once again starring as a man trapped alone on a strange planet (after Christopher Nolan’s Interstellar last year, though with decidedly less space madness here), exudes endless good-humor as a focused astronaut worthy of Philip Kaufman’s The Right Stuff (1983). He’s an affable wiseacre, cracking jokes to his video journal (shot almost as if he’s breaking the Fourth Wall), the film’s stand-in for an internal monologue. Making geeky references to comic books and other pop-culture fun, Watney is an incredibly likable guy. Although not an existentialist who ruminates on why he was abandoned (there’s never a “Why have you forsaken me?” scene), he could hardly be considered one-note. He’s a man who, despite occasional breakdowns when he eventually communicates with other human beings, knows that he has no choice but to remain physically and psychologically healthy if he’s to survive. Through him, a situation that would drive most people mad becomes an endurable process of accepting one’s circumstances and working through them—and not for any schmaltzy reason, like he needs to get home to his wife or child. Rather, he’s operating on pure will. And that’s inspiring. He’s the type of character that would have made Gravity (2013) a masterpiece instead of just a wild visual ride.

Though Watney remains his collected self for most of his time on Mars, we feel the high-stakes from those on Earth representing NASA, now public-owned, as opposed to a government-run endeavor. Jeff Daniels plays a tough NASA director forced to make unpopular decisions; other members include Chiwetel Ejiofor as the mission overseer, Kristen Wiig as a plucky public relations supervisor, and the noble Sean Bean as the crew’s representative. Benedict Wong and Donald Glover are also entertaining as scientists challenged with finding a way to rescue Watney. On Ares 3, worrying about the crewmate she left behind, Jessica Chastain (also from Interstellar) plays the crew’s captain who bears a heavy burden for giving the dreaded order to leave when they did. Alongside her are Michael Pena in his second comic-relief role of 2015 (after Ant-Man), Kate Mara playing another computer whiz after Fantastic Four, Aksel Hennie, and Sebastian Stan.

As suggested above, Scott allows Damon to own the screen, instead of the director’s usual preoccupation with scenery and compositions. Granted, Scott and his cinematographer Dariusz Wolski, shooting in Jordan’s “Valley of the Moon” under the sharp production design of Arthur Max, create a spectacularly detailed film. Yet, regardless of The Martian‘s more serious tone than the book, its effectiveness relies less on the presentation than Damon’s performance, as well as the spirit of human endurance and celebration of the character. In fact, set aside the space backdrop and the film has much in common with Scott’s lighter efforts than his sci-fi work; it’s certainly the most this critic has heard anyone laugh with one of his films since Scott’s con-man comedy Matchstick Men (2003) or his wine-obsessed rom-com A Good Year (2006). In that sense, and given how the film represents an Apollo 13-of-tomorrow storyline, The Martian is very much a crowd-pleaser, complete with several disco songs on the kitschy soundtrack and a predictably applaud-worthy climax.

From an ideological standpoint, The Martian has much to say about the failure of the U.S. and even the progress of the human race. The American Spirit, once upon a time propelled by Manifest Destiny, signaled our character: to rebel against the restraining orthodoxy of England and carve out a slice of the Earth for ourselves, exploring and ultimately taming the Americas and Wild West. Once there was a hopeful time in the 1960s and 1970s when it seemed possible that we might conquer space too. But after the Moon, all other challenges seemed too large, too expensive, too dangerous. Instead of exploring the universe, we grew fat, continued to populate, and continued to consume, as both a nation and species. Today, we continue to carve out our portion through economic and militaristic means by absorbing other entities, rather than exploring our natural world, the worlds in our solar system, and beyond. We are stuck on this planet with nowhere to go, little new to explore, yet at night we can see the endless possibilities above our heads. How do we stand it?

Beyond its fact-based theoretical science, its charming central performance, and the crowd-pleasing tone, the greatest aspect of The Martian is how it considers a world seemingly committed to space exploration—to putting great expense and personal investment into the search for knowledge on other planets because we can and should, because humans are uninteresting when they’re not mastering new frontiers. And with the U.S.’s last manned mission to space being several years ago, we haven’t been very interesting for some time (as this summer’s Tomorrowland tried, and failed, to point out). Weir’s book and Goddard’s script do not consider this an exceptional aspect of their story; it’s a matter-of-fact part of the scenery that NASA will become a public-funded company, for the people and by the people. Underneath that small detail in a story otherwise about Man vs. Nature, there’s something profound to be learned. With any luck, audiences will pick up on this message in The Martian, and then maybe we can do something productive again as a species.