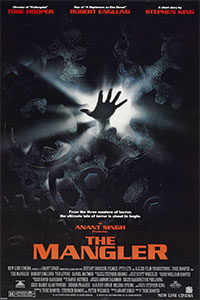 Tobe Hooper told scary stories about worlds that exist beneath the surface of things. In the intense The Texas Chain Saw Massacre (1974), he uncovered a family of cannibals somewhere in the forgotten Texas countryside. When he adapted Stephen King’s novel Salem’s Lot into a terrifying television miniseries in 1979, he followed a vampire who takes over a sleepy Maine town from right under its inhabitants’ noses. The Funhouse (1981) explored a monstrous element operating from behind the walls of a traveling carnival ride. Both Poltergeist (1982) and The Texas Chainsaw Massacre 2 (1982) featured literal underground worlds, one comprised of forgotten corpses, the other a killer family’s subterranean lair. The list goes on and on, and so it’s easy to see why The Mangler, an adaptation of a Stephen King short story, follows in Hooper’s thematic current. It’s about a small Maine town whose community leaders have a deadly secret: all of their power and success can be attributed to the possessed press inside Gartley’s Blue Ribbon Laundry service. If that sounds silly to you, you’re not wrong to feel that way. It’s an objectively absurd premise. And yet, somewhere between the over-the-top performances, Hooper’s unique blend of unrelenting comic horror, and the sheer weirdness of it all, The Mangler urges our viewership along for the duration of its runtime.

The Mangler is about several archaic machines. The Blue Ribbon Laundry’s enormous press, a Hadley-Watson mangler, has been around for decades. Owned by local magnate Bill Gartley (Robert Englund, behind make-up so bad it must be intentional), it’s an ancient-looking machine of dimpled black metal that has a reputation for stealing the occasional finger or appendage. Maybe that’s what happened to Gartley, a walking apparatus of crutches, leg braces, a dead eye, and a crooked glare—a broken-down machine of a human being who oversees the laundry from his office on high. When a worker falls into the mouth of the wringer in the opening scenes, her body is squeezed like a toothpaste tube, folded like a sheet, and left in a bloody pile. Enter the third of the old machines in The Mangler, John Hunton (Ted Levine), an old-school cop with a long coat, circles under his eyes, antacids in his pocket, and a firm belief in “God, country, and the law.” Though the story takes place today (meaning 1995), everyone seems to exist outside of time. The Blue Ribbon’s offices use a switchboard telephone and employees dress like it’s the 1950s, while Hunton behaves like a moody detective from a film noir. There’s even a photographer, who goes by the name J.J.J. Pictureman (Jeremy Crutchley) no less, taking crime scene photos with a camera that still needs one-use flashbulbs.

The movie follows Hunton’s investigation into a series of deadly accidents at the laundry, and his suspicion grows as witnesses raise concerns about “the Mangler”—which is both the actual name of a machine whose function is to crush laundry and a term one would use to describe someone or something that horrifically tears things to bits, a cute wordplay on King’s part. The Mangler in the Blue Ribbon serves both meanings of its name: “It’s almost like the machine tasted blood. And it liked it,” one witness tells Hunton. (Most of the cast lends the movie an odd quality that surely results from the South Africa shoot, as local actors badly disguised their native accents.) With the help of Mark (Daniel Matmor), Hunton’s scholar friend from Berkeley who just happens to know about the occult, the hero uncovers a vast conspiracy: Somehow, a demonic energy inhabiting the Mangler has passed to several people in this small town, including Gartley, and each of them has given their ring finger as a sacrifice to their metallic diety. And so, a secret society of ring-fingerless local leaders has formed around a possessed laundry machine. Armed with a case of holy water and crucifixes, Huntley and Mark attempt to exorcise the demon. 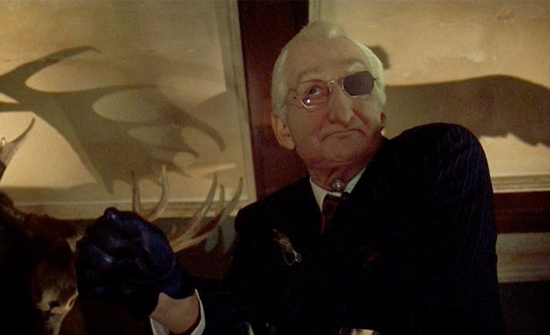 If it’s not already apparent, The Mangler puts strange in its rearview mirror and races toward batshit crazy. But the movie fulfills the promise of Hooper’s off-kilter style that combines adrenaline shocks with a knowing sense of humor. It’s a quality of the director’s work going back to The Texas Chain Saw Massacre, whose humorous undercurrent still eludes many viewers. Hooper elicits curious performances from his cast, particularly Levine, whose beleaguered quality in the movie is only matched by Hunton’s bouts of outrage, and the character’s manic behavior has a comic quality. It’s tempting to view the movie as straightforward, but that would be missing a major component of Hooper’s sensation-machine style. After all, Hooper chose among the most ludicrous of all Stephen King stories to make into a movie, and he’s even added preposterous moments of his own. Watch the objectively goofy scene when Hunton’s coat catches in the Mangler, and rather than yank it out, he resolves to shoot the coat free. Likewise, one has to believe that the filmmakers realized the batty nature of a sequence when the Mangler comes to life and chases a group of people through a corridor.

At the time of The Mangler’s release in 1995, the promotional department at New Line Cinema resolved to sell the three horror-centric personalities driving the movie. The commercial viability of King’s authorship, Hooper’s association with Poltergeist, and Englund’s role as Freddy Krueger in New Line’s A Nightmare on Elm Street and its many sequels equated to easy advertising. As the trailer proclaimed, “Three modern masters of horror have just created the ultimate machine… for terror!” But no amount of name-brand integrity could overcome the ridiculous premise or general cheapness of the production at first glance. At least, not with the critics who universally panned it. The Mangler earned little over a million dollars in fewer than a thousand theaters across the U.S., resulting in a painful bomb. It was Hooper’s last film to receive any kind of wide distribution in the U.S. outside of film festivals. It might have ruined his career, the rest of which he spent making direct-to-video titles, movies-of-the-week, and the occasional episode of a forgotten television series.

Though the original story was among King’s earliest published—in the pages of the men’s magazine Cavalier, five years before appearing in his first short story collection Night Shift, published in 1979—it bears similarities to other, more popular material under his name. Of course, every King story shares a few characteristics with another; he’s a tinkerer in that way. But there’s a streak of Graveyard Shift (1990) here, as both involve blue-collar workers suffering under a crooked boss in a dank warehouse occupied by a monstrous force (fortunately, no rat armies or giant bat creatures live in the Blue Ribbon Laundry). Both short stories, “Graveyard Shift” and “The Mangler,” were featured in Night Shift as well. Still, King improved on the basic premise of possessed machinery in another descendant, Christine (both the book and movie were released in 1983).

The Mangler may not have single-handedly derailed Hollywood’s love affair with horror-themed King adaptations in the mid-1990s. Motion pictures and television miniseries such as Sometimes They Come Back (1991), The Lawnmower Man (1992), The Dark Half (1993), The Tommyknockers (1993), and The Langoliers (1995) added to King fatigue at the time. In the subsequent years, filmmakers such as Frank Darabont (The Shawshank Redemption), Taylor Hackford (Dolores Claiborne), and Bryan Singer (Apt Pupil) tackled King’s more dramatic writing, whereas his horror titles often received television or direct-to-video releases. Even so, The Mangler is too fascinating, too weird and unconventional in a distinctly Tobe Hooper way to disregard. Watching it is like entering into the curious underworld it inhabits. It’s zany and sometimes poorly written (by Hooper, Stephen David Brooks, and Peter Welbeck), but Hooper’s visual approach and uncanny energy have a way of securing our viewership. Everything you’re seeing may seem deranged and stupid if you think about it, but you won’t be bored or even able to look away. There’s something to be said for any film that pulls off such an unlikely feat.