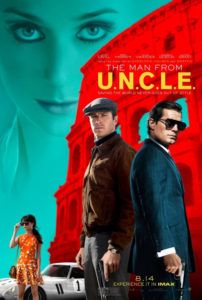 An adaptation of the NBC television series from 1964-1968, the long-in-development The Man from U.N.C.L.E. arrives courtesy of Guy Ritchie, who directs this sixties-inflected spy yarn with his usual visual flair and energy. Along with his Sherlock Holmes co-writer Lionel Wigram, Ritchie once again focuses on two male compatriots who, although it seems like they despise each other, actually enjoy working together and make an excelling team. There’s a woman between them, making for plenty of sexual tension, and together the three expose a vast conspiratorial plot orchestrated by a ruthless villain. Ritchie and Wigram imbue the screenplay with familiar archetypes, all suspiciously reminiscent of Sherlock Holmes and Sherlock Holmes: A Game of Shadows: playful masculine (if slightly homoerotic) banter, elaborate costumes, and an overall light tone, all assembled with a diverting style that makes otherwise hollow experiences like these entertaining but forgettable.

A reject from the 1990s movement to adapt every classic television show into an underwhelming movie, The Man from U.N.C.L.E. belongs on a shortlist of titles (including The Untouchables and The Fugitive) that do the source material justice. Warner Bros. has been developing a feature film adaptation since 1993, with a reported 20-plus scripts and several big names attached over the years including director Steven Soderbergh and star Tom Cruise. But Cruise’s domination of the based-on-a-TV-show spy genre with his ever-popular Mission: Impossible franchise left other actors to fill the gap. Henry Cavill (Man of Steel) and Armie Hammer (The Lone Ranger) play CIA agent Napoleon Solo and KGB operative Illya Kuryakin respectively, originally played by Robert Vaughn and David McCallum. They’re paired together to stop international crimes for the United Network Command for Law and Enforcement during the tense period of Cold War paranoia.

Aside from the two main characters, their eventual handler (Hugh Grant), and Daniel Pemberton’s take on Jerry Goldsmith’s original theme, Ritchie and Wigram create their own origin story for the basic setup. Not that the majority of viewers will notice any diversions; those who watched the show aren’t exactly the target demographic. And so, perhaps it’s an odd choice that Ritchie chose to maintain the original sixties-era backdrop, since today’s post-modernist viewers aren’t likely to understand the full implications of the Capitalist vs. Communist struggle. Nevertheless, the story revolves less around that conflict and more around a standard stop-the-terrorist-with-a-nuke scenario. A former art thief blackmailed into doing his penance for the CIA, Solo must sneak across the East German border to extract a female mechanic named Gaby (Alicia Vikander, from Ex Machina). Her rocket-scientist father has knowledge regarding a process to make atomic bombs much easier to assemble. But the Russians want Gaby too, as Solo soon discovers when he and Gaby are chased by Kuryakin, a towering brute with a scarred eye and uncontrollable temper.

Eventually, Solo and Kuryakin learn they must work together to stop a group of terrorist Nazi sympathizers, a glitzy Italian sophisticate (Elizabeth Debicki, under gobs of sixties makeup) and her torture-obsessed ex-Nazi doctor (Sylvester Groth). Plenty of twists and turns along the way keep the story moving, while the actors and their chemistry give the familiar plotting life. Cavill and Hammer may seem somewhat underwhelming at first (they’re not as immediately likable as Robert Downey, Jr. and Jude Law in Sherlock Holmes), but the former’s suave charms and the latter’s inhuman glares soon grow on you. The dialogue is flush with banter and sexual innuendo between Solo and Gabby, Gabby and Kuryakin, and even Solo and Kuryakin (“I’ll be on top,” one of them says. “That’s alright, I prefer the bottom,” responds the other while picking dual door locks). Verbal jabs between our two male heroes persist throughout, with just an undercurrent of resentment for the other’s political affiliations.

During many of the action scenes, the repartee between Cavill and Hammer steals the show, leaving the villains (and thus the plot) somewhat arbitrary. Fortunately, Ritchie keeps us involved with stylish, swingin’ sixties-ish splitscreens—reminiscent of Stanley Donen fare; Arabesque (1966) comes to mind—that occupy several angles at once and eventually combine to a clever sort of shot-for-shot logic. A chase sequence between three vehicles near the finale is extraordinarily edited by James Herbert. But one of the best sequences in the film is the most meditative. It features Kuryakin on a speedboat struggling to outrun a larger gunner behind him; meanwhile, Solo removes himself from the conflict. He settles into the cab of a transport truck, inside of which the driver has left his lunch, including a delightful looking sandwich and bottle of wine. As he turns on the radio, listens to orchestral music, and enjoys a snack, Solo watches Kuryakin fight for his life.

Designed as competition for James Bond (Ian Fleming contributed to the television series) and Mission: Impossible franchises, The Man from U.N.C.L.E. may be a second-tier substitute, but it stands out by embracing its era of origin. Production designer Oliver Scholl and costumer Joanna Johnston create an elegant sixties mise-en-scène, which adds much to our overall enjoyment of the experience. As does Ritchie’s customary vigor behind the camera—the saving grace of his more recent blockbuster titles. Moreover, the period backdrop sets this spy yarn apart from more recent titles like Skyfall or Kingsman: The Secret Service. Much like Ritchie’s Sherlock Holmes efforts, this film exists as a temporary pleasure that’s not too intrusive and quickly forgotten once it’s over. Nevertheless, it effectively sets itself up for a sequel and, in spite of the film’s somewhat shrug-worthy consequence, a sequel would be welcomed with opened arms and a reserved seat for this critic.