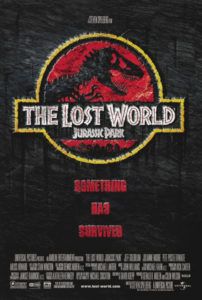 The Lost World: Jurassic Park has one of the worst cases of sequelitis this critic has ever seen. In typical Hollywood fashion, the film attempts one-upmanship by adding more, more, more. And yet, the first sequel in the franchise has none of the awe or spectacle that its predecessor had perfected, nor any of the thoughtful moral and scientific analysis that made Jurassic Park unique for an escapist adventure. The Lost World replaces ideas with more dinosaurs, more victims, a second Tyrannosaurus rex, and finally with a dinosaur unleashed on the streets of San Diego to wreak havoc. The result is perhaps director Steven Spielberg’s least entertaining and most poorly scripted motion picture, a film that feels utterly empty, more like a byproduct of the machine that operates on the worst aspects of Hollywood commercialism.

Nevertheless, Spielberg’s 1997 sequel to his original film made a lot of money, though not as much as its predecessor, which upon its release was the most successful film ever made. The Lost World earned $229 million domestically and came in a distant second on 1997’s top earners list, far behind James Cameron’s Titanic, which made $600 million. In other words, the film served its commercial purpose. Artistically, however, almost no one involved looked favorably on the production—not even author Michael Crichton, who initially declined to write a sequel to his 1990 book. Spielberg convinced Crichton to write the sequel, and before the book was finished, Spielberg and the original’s screenwriter David Koepp had already begun pre-production on the film adaptation. Spielberg later admitted that he pursued the sequel at Universal Studios because, when they were left to make a sequel to his film Jaws (1975), the results were incredibly disappointing. Spielberg felt if he directed The Lost World, he could at least control the outcome.

Much like his production on Jurassic Park, which debuted the same year as Schindler’s List, Spielberg released an entertainment and an historical drama back-to-back in 1997, the latter being Amistad, about an African slave ship revolt and the ensuing court case. However noble the intentions of Amistad, the same cannot be said of The Lost World, a blatant money machine that brought further attention to a dull Universal Studios Hollywood theme park ride. Indeed, The Lost World lacks all sense of discovery and marvel that made the original so profound. By this time, Hollywood blockbusters had fully adopted CGI into their toolboxes, and audiences had since been exposed to all manner of digitally rendered creatures and environments. Seeing yet more dinosaurs was not enough for most moviegoers, and unfortunately, neither Crichton nor Koepp had written interesting characters. And when the audience doesn’t have an emotional or dramatic investment in the characters, any hope for suspense or thrills is completely eliminated. 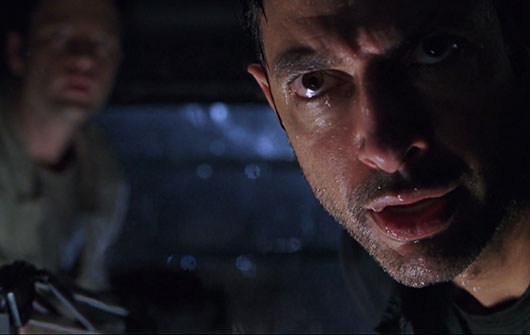 Along with incorporating scenes from the original book that didn’t make it into Jurassic Park, Koepp repeats Crichton’s thin sequel gimmick of introducing Site B, a second island established by John Hammond (Richard Attenborough) to raise the dinosaurs. Now years after the initial incident, Hammond hopes to maintain the island as a dino-preserve, and has sent Dr. Sarah Harding (Julianne Moore) to the island, alone (aside from her “lucky bag”, an annoying plot device), to document the dinosaurs in their “natural” habitat, and therein provide visual evidence that any tampering with the island would mean disrupting a sensitive ecosystem. Turns out Sarah is the girlfriend of ever-quipping mathematician Ian Malcolm (Jeff Goldblum), who mounts a rescue with environmentalist Nick (Vince Vaughn) and tech guru Eddie (Richard Schiff) in tow. Once on the island, they find Sarah, but soon they’re joined by a small army of InGen goons, there to capture dinosaurs and return them to a mainland Jurassic Park location, in San Diego. Inevitably, both the Naturalists and Big Business teams end up together, scrambling to escape bloodthirsty dinosaurs.

By the end, the film becomes an absurd, tongue-in-cheek affair, when a boat carrying a T-rex crashes into port and unleashes the beast on the city. Let’s look at this sequence for a moment. First of all, the boat’s crew has been completely devoured, with half-eaten limbs all over the deck. And yet, the T-rex remains locked in the ship’s hold along with its child, behind a motorized door. How did the T-rex manage to eat everyone on board and then get locked back in the hold? Anyway, once freed, the animal proceeds through populated areas. He drinks from a swimming pool and, breaking a major movie rule, shamefully eats the family dog. Before long, he’s chasing Japanese tourists down the street; they yell in Japanese, “I came to America to get away from this!” in a campy nod to Godzilla. The T-rex sends a car crashing into a video store, where the audience can spy a standee of “Hamlet” starring Arnold Schwarzenegger. Spielberg tries to lighten the mood by having fun, but by this time, the audience has had enough.

Uninspired setups and visually dull sequences drive The Lost World. Spielberg’s direction has never felt more lackluster or technically bland. Consider the sequence where, quite illogically, Nick brings a yelping baby Tyrannosaur into their mobile base, which leads to an attack by its two parents. The event proves Sarah’s theory about carnivores having familial bonds, but the cinematic delivery has no bravura. Spielberg told biographer Joseph McBride about his increasing distain for the material on the set: “I beat myself up… growing more and more impatient with myself… It made me wistful about doing a talking picture, because sometimes I got the feeling I was just making this big silent-roar movie… I found myself saying, ‘Is that all there is? It’s not enough for me.'” Moreover, in typical sequel fashion, Koepp’s script repeats a number of themes from the original: another unpopular theory about dinosaur behavior is proven, another T-rex escape by hanging off a cliff, another rainy winch scene, and another despicable character eaten by dinosaurs he believes are harmless. 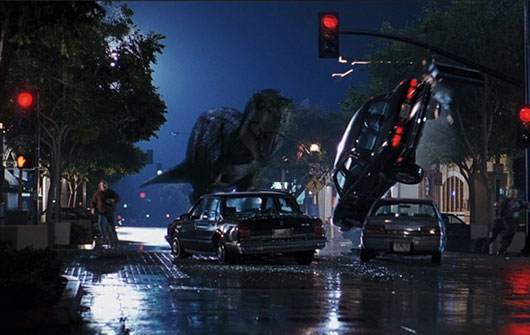 And then there’s Malcolm’s adolescent African American daughter, Kelly, played by actress Vanessa Lee Chester. Though her presence is explained in a commendably straightforward way, she never quite feels like Malcolm’s progeny, and the entire character dynamic between the two feels forced. In part, it establishes Malcolm as another distant Spielberg father, but she also fills the gap of Lex and Tim from the first film. Aside from being an obnoxious and messy teenager (Seriously, what’s with the mess she makes in the mobile base within a matter of hours?), her character saves the day through her parallel bars routine. Early in the film, she accuses Malcolm of bad parenting because he didn’t know that she was cut from the gymnastics team. Later, when she kicks a Velociraptor out a window by using expert gymnastics skills, Malcolm says, “They cut you from the team?!” The sequence mirrors establishing Lex as a hacker early in Jurassic Park, only so she can save the day by rebooting the computer system later on. But the gymnastics scene not only weakens this formula in the original, it’s also just lazy writing.

The most interesting characters in The Lost World remain on the margins, such as InGen’s big game hunter Roland Tembo (Pete Postlethwaite), a clear attempt to mirror Bob Peck’s game warden Muldoon from the original. Still, Tembo is the only character with a sense of dignity and depth, whereas Koepp turns the otherwise fascinating Malcolm into a wisecracking leading man and banks on Goldblum’s continued popularity from Independence Day the year before. But the film overall remains a disappointment, not because the dinosaurs behave basically the same, but because the human characters behave in such silly, obligatory, one-dimensional ways. They’re propelled because the script tells them what to do, and Spielberg doesn’t bother delivering the proceedings with any visual flair whatsoever. The entire experience is compulsory and soulless, a product of a product. Sequels are best when they expand upon and deepen the mythology of the original, but The Lost World took a step back and gave us less, knowing that it would do what it set out to accomplish—make money—without even trying.