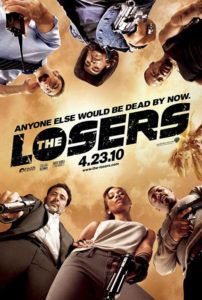 The Losers began as a comic published by DC Comics in the 1970s, then was reimagined in the early 2000s by writer Andy Diggle for a more modern approach. The idea follows an ex-Special Forces team as they’re deceived by their own and forced to seek revenge by underground means. The movie, directed by Sylvain White, combines traditional, even fantastical comic book rules with your standard 1980s action movie fare. The result is fun if very middlebrow in terms of its quality. But the congenial actors make good the banter-laden dialogue by screenwriters James Vanderbilt (Zodiac) and Peter Berg (The Kingdom), and the energy level never gets below ten.

In the opening scenes, the heroes aim to detonate a South American drug lord’s compound, only to find that inside children are being used as handlers. They try to call off the mission, but they’re betrayed by a seedy, megalomaniacal CIA handler, Max (Jason Patric, who’s clearly having a blast in the role). Max is the type of ultra-powerful movie villain who shoots his female assistant, there merely to hold an umbrella over him for shade, when she inadvertently allows sunlight to touch his skin. In trying to concoct a world war for inexplicable reasons, Max plans to buy several sci-fi weapons called “snukes” (sonic nukes). Our team of heroes, after looking enraged at a blazing teddy bear, throws away their dog tags in the prologue and vows revenge against Max for the death of some twenty children.

All with one-word monikers, either nicknames or surnames, the Losers are introduced with a freeze frame and a title in the style of the comic book’s illustrator, Jock. They’re led by Clay (Jeffrey Dean Morgan, from Watchmen), a cocksure head who the others follow without question, usually. Number Two is the scar-faced Roque (Idris Elba, from Obsessed), who resents Clay for turning his respectable “Black Ops” life into that of a mercenary. Jensen (Chris Evans, from Sunshine) is the wise-cracking computer expert with no end of goofy t-shirts. Pooch (Columbus Short, from Armored) talks more about being a family man than his job of providing transport. And Cougar (Óscar Jaenada, from Che) serves the silent-but-deadly sniper function. They’re joined in their post-betrayal slump by the “sexpot” Aisha (Zoe Saldana, from Avatar and Star Trek), a killer who hires the Losers to kill Max; her personal motivations are revealed as a twist.

If you think the setup mirrors that of The A-Team (a franchise with a movie due June 2010), you’d be right. Only it’s a B-movie version of it, with lesser actors that couldn’t carry a movie like this on their own (hence, in each case, noting where you might’ve seen them before, as these aren’t name-recognizable performers). Audiences in the mood for team-based action movies have plenty to consume this year; in addition to The Losers and The A-Team, there’s also Sylvester Stallone’s The Expendables coming in August. Viewers simply have to choose which set of actors they prefer more. No matter which choice they make, any one of the movies involves plenty of repartee between displays of machine-gun-heavy action sequences in exotic locales.

The characters are nothing more than types that only become interesting when paired with other types. When the movie starts asking us to care if Pooch makes it home in time to see his pregnant wife give birth to his baby, we want only for this to be somehow connected to the Max plotline, though it isn’t. There’s a notable dumbing-down of the material by Hollywood, particularly with Aisha, who in the comics was a complex character, but here prances about in her underwear during shootouts. By the end, when the movie leaves the team’s ultimate goal of killing Max unfulfilled in execution of an obligatory sequel setup, the audience feels somewhat robbed by the compulsory need in action movies to blow up the bad guy.

Making up for its flaws with good-humored characters, in a way the movie recalls Sherlock Holmes, in that the outcome isn’t so much about plot as keeping the audience entertained through endless banter and action. The Losers has plenty of that. Audiences in need of mindless action with a surprisingly bloodless PG-13 rating will find themselves mildly entertained, even if the inexperience of director White (Stomp the Yard) shows. An assemblage of action movie clichés, the movie has a lot of obvious influences that it’s drawing from, and so it feels secondary for its derived arrangement, but it proves an ample good time that’s easily forgotten after the closing credits.