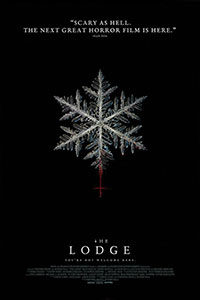 Isolated, wintry locales that give way to domestic trauma, religious cults, paranoia, and mental illness, or some combination thereof, have proven to be furtive ground for the horror genre. Stanley Kubrick’s The Shining (1980) made use of the snowed-in Overlook Hotel, where Jack Nicholson’s crazed, or possibly possessed, alcoholic caretaker tries to discipline his wife and child with an axe. John Carpenter raised suspicious questions about identity amid a group of Antarctic scientists in his gooey masterpiece, The Thing (1982). And Ari Aster depicted the intersection between family tragedy, psychiatric disorders, and the occult in his gut-wrenching Hereditary (2018). Austrian filmmakers Veronika Franz and Severin Fiala draw from these films, and in some cases directly reference them, in their second feature after Goodnight Mommy (2014), The Lodge—an admirable film, if somewhat too obvious in its reference points. Nevertheless, it’s an engrossing watch, bound to elicit gasps from an audience, because its filmmakers have considered each shot and its effect on the unsettling mood. What doesn’t work so well are the leaps in logic designed to facilitate the film’s intentional, but not entirely effective, ambiguity.

Franz and Fiala hit the viewer with disquieting information from the start, setting the atmosphere: The young Mia (Lia McHugh) and her adolescent brother Aiden (Jaeden Martell) ride with their mother Laura (Alicia Silverstone) to the home of their father, Richard (Richard Armitage). The parents have separated, and soon Richard informs Laura that he wishes to finalize their divorce and that he plans to marry his younger mistress. Laura’s abrupt “okay” response is followed by a startling scene that leaves the children without a mother. Six months after a painful funeral, Richard proposes that they spend Christmas in the mountains at the family lodge, where the children will have several days alone with his fiancée, Grace (Riley Keough), to bond with her while he’s away at work. The children, harboring bitter animosity about their future stepmom after their mother’s suicide, want nothing to do with her—especially after they learn how she and Richard met. He wrote a book about a cultish Christian sect that committed mass suicide, and at 12 years old, she was the only survivor, chosen to bear witness. Supposedly deconditioned from her youth in a religious cult, Grace still relies on pills to remain straight, and she carefully hides them from Richard.

Although these establishing scenes take place from the children’s perspective, the filmmakers shift to Grace’s point-of-view once the story transitions to the lodge—a space that could have only been designed by horror screenwriters. The late Laura had an affinity for imposing crucifixes and cracked paintings of the Madonna, as if she had the prescience to decorate the place to trigger Grace. It’s a space filled with drafts and solitude, wooden floors that creak and corners consumed by shadows. After Richard heads to work and leaves the children with Grace and her small dog (The Lodge is not a film for dog-lovers), it’s even more uninviting. The children whisper among themselves, give her the silent treatment, refuse to eat meals with her, and suggest late-night movies like Carpenter’s The Thing—not an experience designed to settle unspoken tension. If the situation is strained at first, it becomes worse once they wake one morning to find the electricity out, the pipes frozen, and the cell phone batteries dead. Their winter coats have gone missing, and so has most of the food. Worse, the blizzard outside has left them trapped, miles from any form of help. 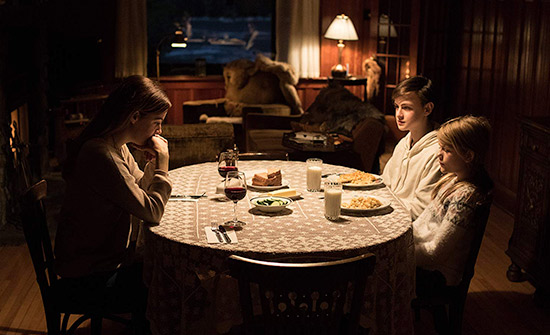 The narrative implants plenty of doubt about what’s going on and who’s causing it. Our suspicions go to Grace, who the children see sleepwalking, and whose dreams suggest that her cult experiences as a child remain in her subconscious. At the same time, the children, with their strange shrine to their mother and their unkind behavior, force us to question whether they have arranged all this. As the trio debates about what they should do, there’s also some question as to whether they’re even alive. Have they all died and gone to purgatory? All the while, Franz and Fiala employ curious imagery of Mia’s dollhouse, a scale miniature version of the lodge, in which the children have a doll for each family member. Could this be part of some kind of Voodoo-esque witchcraft? Does it imply a similar message as the dollhouse in Hereditary, where everyone involved seems to be a pawn in a larger ritual? And what should we make of the camera’s lingering shots of Mia’s sea monkeys, both in the actual lodge and in the dollhouse? Unfortunately, as the film proceeds and some of these questions are addressed, the screenplay, written by Franz, Fiala, and Sergio Casci, doesn’t have very satisfying answers.

Further exploring the aforesaid references, the filmmakers adopt a Kubrickian slowness and austerity to the narrative, injecting long, pensive shots of the lodge exterior, like those used in The Shining to emphasize spatial isolation. Indoors, cinematographer Thimios Bakatakis shoots the characters in repeated shallow focus close-ups, often from diagonal, off-center angles that suggest the warped mindsets at work. The feeling of limited space indoors, designed in clean, minimalist fashion, gives everything onscreen an intended staginess, as though each scene plays out from inside Mia’s dollhouse. Scenes that take place outdoors, meanwhile, tend to dwarf the characters in a vast landscape of white snow. Grace, who ventures out at one point to find help, faces punishing winds and an oppressive whiteness all around her. The methods of isolation and confinement used throughout The Lodge prove very effective, creating a feeling of unease no matter the location, in large part due to the actors. Keough, one of the most exciting young performers working today, delivers another complex turn (see American Honey, 2016), but once again after The Killing of a Sacred Deer (2017), it’s Alicia Silverstone’s small role that leaves the deepest wound.

The cumulative disorientation of The Lodge is a testament to the control exercised by Franz and Fiala, but where the story goes is a disappointment. We are left with a feeling of “Is that all?”—even though we are shaken by the final frames, the film resists identification with any one character’s frame of mind. Unfortunately, the unflinching, humorless story doesn’t put a brand upon the brain or heart. The film may use established horror imagery, as well as stigmas about cults and mental illness, in ways that exploit our viewership with a suggestive menace, but it’s also self-aware in its uses of these elements, evidenced in its nods to other material of this ilk, and the terrifying turnaround that occurs late in the film. It plays like a concoction of several ingredients, mixed with the intention of achieving an uncanny, disturbing tone. If The Lodge doesn’t have a lasting effect, however, it at least boasts an impeccable sense of mood and visual composure that makes it easy to admire.