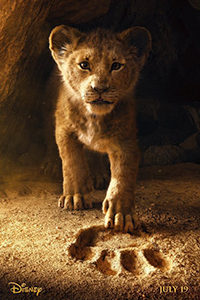 When roboticist Masahiro Mori first coined the term “Uncanny Valley” in 1970, he described how a person’s response to a human-like robot would shift from recognition to uneasiness as the machine failed to create a believable illusion of humanity. The term became commonplace in cinematic discourse after performance capture technology was used to deliver crude computer-animated characters in Final Fantasy: The Spirits Within (2001), then in Robert Zemeckis’ The Polar Express (2004) and Beowulf (2007); although, the imagery in these early examples barely approaches realism. Subsequent films have made strides in their ability to replicate the human appearance by digital means, but it’s never entirely convincing. Digitally animated films, or effects that blend artificial elements into a real setting, can often deliver impressive results, but it’s difficult to think of a single example where the use of CGI to create or augment a character wasn’t obvious. With Disney’s new version of The Lion King, the studio’s recent trend of remaking their classic hand-drawn animated films with live actors and photoreal animation has broadened the definition of “Uncanny Valley” to include animals.

Director Jon Favreau applied this technology to 2016’s The Jungle Book, in which he blended digital flora and fauna with a few human actors, all achieved without the need to leave the comfort of a Hollywood soundstage. With The Lion King, Favreau has been freed from the human element since the characters are comprised entirely of talking animals from the African plains. Big-name celebrities lend their voices to the cast, but the animators have not used the actors to inform the movements and behavior of the characters. Beyoncé, Donald Glover, Chiwetel Ejiofor, Keegan-Michael Key, John Oliver, and James Earl Jones have been cast for their name-brand appeal, as opposed to their essential voices. With names such as these, the film becomes a can’t-miss event for many moviegoers. As for the characters, Favreau and hundreds of animators rely more on zoological realism than cartoon expressions to inform the look and feel of the animals in their environment.

The primary reason for the new version to exist has nothing to do with an urgent need to retell The Lion King for a modern audience. The original holds up better than most of Disney’s library, and the story isn’t particularly relevant for today, apart from the timelessness its classical monomyth narrative structure. The new film exists to take advantage of the intellectual property, which welcomes adults who have nostalgia for the original and asserts the brand among younger viewers yet unfamiliar with the story. It’s a surefire moneymaker—as Disney’s other remakes, from Cinderella (2015) to Dumbo (2019), have shown. The film’s existence was inevitable; so are the upcoming versions of Mulan, The Little Mermaid, and Pinocchio. But unlike the other titles in this recent trend, The Lion King most resembles the story of its hand-drawn counterpart. Jeff Nathanson’s screenplay is jealously devoted to the earlier film, complete with identical dialogue in some scenes. 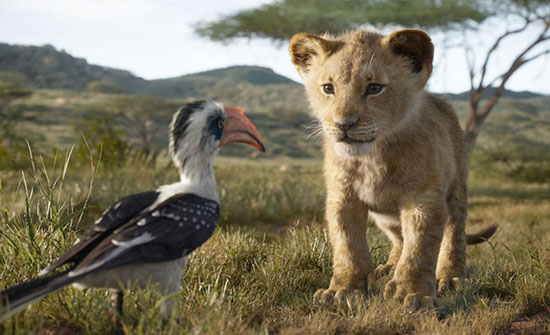 Visually, Favreau replicates entire sequences, sometimes shot-for-shot, to avoid straying from the established material. The “Circle of Life” prologue copies the original with every beat and composition intact, as does the “Hakuna Matata” number. The story of the 1994 classic and Favreau’s version line up almost exactly, with only the occasional addition or flourish that represents a small degree of variation. Those familiar with the earlier film will feel a sense of tedium in the filmmakers’ unwillingness to deviate. It’s a quality that underscores the film’s pure nature as a commercial product and reminds the viewer to value true adaptation. Consider David Lowery’s Pete’s Dragon from 2016, a film that completely disregards its 1977 source material to offer something unexpected and essential. Lowery took artistic license, and the result was superior mainstream filmmaking. Favreau’s main creative choice is facilitating a realistic appearance—aside from a few anatomical blank spots around anuses and genitalia (don’t expect to see Rafiki’s pink mandrill butt).

Aesthetically, The Lion King’s sole appeal to those versed in the material is to see how realistic the filmmakers could make everything look, and it’s a neat trick. Working with cinematographer Caleb Deschanel, Favreau reimagines the original as a Nature documentary with a plot—something akin to Disneynature’s African Cats (2011), except the animals speak in English and sing a few songs. A team of special effects wizards employed groundbreaking virtual reality technology to create believable digital spaces, rendering an almost completely convincing environment. It’s occasionally awe-inspiring, though it may trigger some who take issue with seeing live animals harmed onscreen—even though no real animals were used, watching photoreal lions in peril proves much more stressful than watching hand-drawn lions. Then again, you’ll spend so much time comparing it to the original, or thinking, “Wow, that looks real,” to notice what’s happening in the story. The remake has no hope of replicating the original’s emotional impact due to its formal conceit.

Of course, the views expressed so far in this review come from the perspective of someone who watched the original numerous times and, therefore, sees no utility in telling the exact same story in an alternative format. Children or viewers who haven’t seen the 1994 version may find themselves engaged by this remake. The improvised banter between Timon (Billy Eichner) and Pumbaa (Seth Rogen) certainly brings much-needed levity and energy to the proceedings, complete with a hilarious Disney in-joke. However, the emotional impact of the film isn’t as pronounced. The original benefitted from anthropomorphized characters with expressive faces; they existed in a universe that played by the rules of a cartoon and a musical. The evil Scar delivered his sinister “Be Prepared” against a backdrop of neon-green gas and rows of hyenas marching like fascists. Simba performed “I Just Can’t Wait to Be King” in a synchronized Busby Berkley-esque dance with anteaters balancing on giraffes balancing on hippos. But in the dully realistic world that Favreau has built, the characters and situations are limited to the behavior and movements of real-life animals. It’s a far less joyous and heightened experience than the original, robbing younger audiences of the pleasures of a cartoon fantasy. 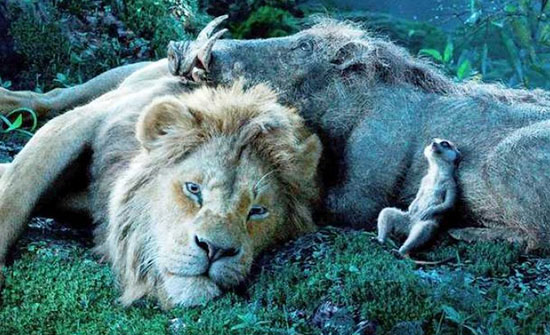 Ultimately, the realistic aesthetic ambitions of The Lion King clash with a story that requires animals to speak. Whenever a photoreal animal delivers dialogue or sings a song, the film enters Uncanny Valley territory. It doesn’t help that Nathanson’s script forces the lifelike leonine to engage in banal Millenial-speak such as “Let’s do this” or “I got this” or “I can’t even.” Nor do the songs offer much interest. As with The Jungle Book, Favreau has half-heartedly committed to the musical appeal of the original for something that borders on spoken word singing, making them feel unstirring and mostly unnecessary. But the visual effects sometimes elevate the film with stunning imagery: Watch the purely visual journey of a tuft of Simba’s fur as it crosses a vast expanse; it’s a small moment, yet it demonstrates how the film would have been better served by making more original changes like this. Instead, every time an animal talks or sings, it simultaneously reduces its appeal down the arena of lowbrow talking animal fare, like Cats & Dogs (2001) or Beverly Hills Chihuahua (2008).

Similar to what occurs when watching Favreau’s The Jungle Book, the drive toward visual realism in The Lion King remains in conflict with the fantastical quality of what happens in the story—in other words, animals behaving in a non-animal way. During the remake’s musical numbers or scenes in which otherwise cartoonish events occur, the realism of the animals breaks the intended illusion of photorealism. The viewer spends so much time alternating between thoughts of that looks incredible and that doesn’t look right that, for some, the story has no hope of putting those thoughts to rest. Children may prove oblivious to these concerns; some adults, too. Meanwhile, the experienced viewer spends much of the runtime comparing the remake to the original, which is analogous to the process of determining whether something belongs in the Uncanny Valley—where the viewer recognizes the remake is close to the real thing, but not quite. Along with Disney’s bald-faced use of the intellectual property to exploit moviegoer nostalgia, the entire experience of The Lion King left this viewer in a state of unrest.