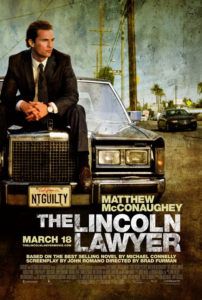 Applaud The Lincoln Lawyer’s casting directors, the only members of the production, besides their chosen actors, to know exactly what they were doing and why. Most of the film’s other elements, from the occasionally ham-fisted script by John Romano (Nights in Rodanthe) to the head-scratching stylization of director Brad Furman, feel misguided next to the actors, who elevate this otherwise common courtroom thriller into diverting entertainment. Based on the best-seller by Michael Connelly, the Lionsgate release places Matthew McConaughey in charge of this John Grisham-esque material, reminding audiences of his star-making turn in A Time to Kill, and that he used to make more than his recent string of nauseating romantic comedies.

Perfectly cast, McConaughey, his confident charms in full swing, plays Mick Haller, a wheeling-dealing lawyer who conducts business from his vintage Lincoln Continental. The clever, smooth talkin’ defense attorney handles low-grade clientele from drug-dealing bikers to your average hooker-with-a-heart-of-gold, and preserves his dignity to naysayers with a stirring speech about the other side of justice. For the film’s central case, seedy bail bondsman (John Leguizamo) recommends Haller to a well-to-do defendant, Beverly Hills elite Louis Roulet (Ryan Phillippe), whose high-profile case will earn Haller plenty. Though his client is charged with the assault and attempted rape of a prostitute, Haller interviews Roulet and believes he’s innocent, at first.

As usual with this genre, nothing is what it seems. Haller begins to suspect that Roulet not only committed the crime he was charged with, but another murder-rape for which Haller’s former client took the wrap. Pinned down by attorney-client privilege laws, Haller works the system to deliver Roulet’s comeuppance, with the usual twists and turns along the way. You’d think Haller was a modern day Shaft with the cool airs he’s given; but he isn’t quite as despicable as other characters make him out to be. Aside from defending the occasional fun-loving criminal, his sense of morality is strictly attuned to mainstream sensibilities. So there’s a moment of unintentional laughter when the finale comes around, and Bryan Cranston’s hard-edged cop hisses “I don’t get you Haller. Whose side are you on, anyway?”

The considerable supporting cast does wonders for their humdrum roles. Josh Lucas plays the hard-hitting prosecutor opposite Haller, and becomes a punching bag as testimonies incite more than one beat change. In too small a role for too good an actor, William H. Macy has a brief turn as Haller’s private investigator. Marisa Tomei is a prosecuting attorney and Haller’s ex-wife who still holds a flame for her former husband; unfortunately, the Oscar-winning actress has little to do except share a love scene with McConaughey and carry him home drunk. Recalling his star-making role in Cruel Intentions more than a decade ago, Phillippe’s predictable performance as a silver-spooned snob feels underplayed and underwritten. And even if, by and large, this impressive cast is underused, McConaughey owns every scene and makes the film worthwhile, and without taking off his shirt even once. (Now that’s impressive.)

Furman makes a number of awkward choices from behind the camera, contrasting effective steps toward realism with uncomfortable moments of stylization. Exterior scenes appear saturated by a red wash to enhance the potboiler tone, which is only more effective when paired with the location shooting in L.A.’s rundown industrial and suburban areas. But then Furman employs quick zooms and transitional wipes that feel incongruous to the rest. These quibbles aside, Furman leaves the majority of The Lincoln Lawyer in the capable hands of his top-notch cast, as each performer makes their conventional role look deceptively more involved by presence alone. Viewers hoping for anything more than your run-of-the-mill courtroom thriller will feel letdown, whereas general audiences will surely eat this stuff up.