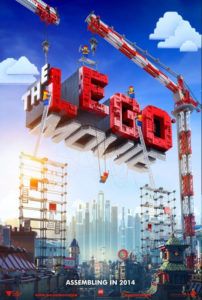 Were you the kind of kid who followed page-by-page Lego instructions with meticulous attention, or did you take indiscriminately from one of those assorted plastic Lego buckets filled with pieces from countless forgotten sets and construct free-form? However you approached playtime, Legos have been teaching children to build and use their imaginations since 1949. Simple, plastic, multi-colored pieces assemble to whatever the instructions demonstrate, whatever the imagination desires, or whatever the remaining pieces allow. With that in mind, The LEGO Movie embraces this toy’s limitless possibilities and transforms them into an entertaining, equally versatile family entertainment and ever-marketable franchise. Rendered with CGI to look like Legos have come to life by way of stop-motion animation, the movie doubles as a 100-minute commercial, but also takes a few clever strides in the toys-come-to-life vein originated by Pixar with their Toy Story franchise, and celebrated to fanboy delight in Robot Chicken.

The movie begins in an all-Lego world, an outward utopia ruled by Lord Business (voice of Will Ferrell), an overseer who demands that everyone should behave in a certain way and not deviate from the “instructions”. Here’s a world where everyone sings the same thumpin’ song (the annoyingly catchy “Everything is Awesome”), watches the same dull sitcom (“Where are my pants?”), and drinks the same overpriced coffee. Sound familiar? But a special band of Lego people called “master builders”—those who can build outside of the instructions—have formed a rebellion against Lord Business, and their leader Vituvius (voice of Morgan Freeman) has prophesied that the Chosen One will find the “Piece of Resistance” and stop Lord Business’ rein. Enter Emmet (voice of Chris Pratt), an average, ever-conforming construction worker who stumbles upon the all-powerful Piece and, as an unlikely and reluctant hero, joins forces with Vituvius’ group of new and familiar faces, most prominently the black-garbed heroine Lucy (voice of Elizabeth Banks) and her cynical beau, Batman (voice of Will Arnett).

But the rebellion also consists of Lego’s countless franchise tie-ins, most of them being properties owned by the distributors at Warner Bros., and most with actual Lego toy counterparts (run for the stores, parents). Making appearances are Gandalf, Dumbledore, Superman, Green Lantern, Wonder Woman, the nunchuck-wielding ninja turtle Michelangelo, various sports figures, and several Star Wars characters. The comical take on these familiar faces makes the material instantly accessible, whereas the commercialism of their presence is just short of nauseating. Curiously enough, more original and entertaining are the original characters. Take the Liam Neeson-voiced Bad Cop, whose face turns from aviator-glasses-grumpy to nerdy-happy in “Good Cop” mode, and with it Neeson’s voice goes from gruff to buoyant in a hilarious contrast (trying to imagine Neeson performing his “Good Cop” lines is funny in itself). Or take the “1980s Space Guy” voiced by Charlie Day—a high-energy astronaut obsessed with building a spaceship for his fellow rebels; the movie’s hardest laughs come when he finally builds the long-delayed spaceship and rockets his way through the Lego world, screaming “Spaceship!” They’re all in a massive conflict involving blockbuster-sized battles and chases, except, of course, on an ironically small scale.

The animation itself looks convincingly real, as if someone took the time to move Lego toys frame-by-frame in a stop-motion animation process; however, directors Phil Lord and Christopher Miller (Cloudy With a Chance of Meatballs) realized the movie using computer animation. Still, everything onscreen appears to be made of Legos, from the distant backgrounds to ocean waves, from fiery explosions to laser blasts—they’re all Lego pieces. Limited by their construction, the Lego characters move in blocky ways and the filmmakers get some laughs out of these confines, the few points of articulation resulting in restricted movement, far removed from the playthings in Toy Story who became fully moveable in the absence of children. Nevertheless, the characters’ faces here are animated, and by our participation in the story, we feel like a kid again, projecting more life onto them than exists onscreen. And with everything Lego, parents can undoubtedly expect children to ask for more Lego sets to build their own Lego worlds at home even bigger, better, and more elaborately than before. Indeed, the cost of seeing The LEGO Movie will extend well beyond the price of movie tickets.

Along with the expected, inherent, and embedded campaign to buy toys and lots of them, The LEGO Movie sends a mixed message about the dangers of conformity. For example, it spends the whole movie poking fun at the popular hit “Everything is Awesome” but then plays it so often throughout that, by the time it’s played again over the end credits, the kiddies in the theater are bopping to its generic, popish sounds. And even though when the movie ends, children will be successfully transformed into little consumer drones, adults may get more out of the experience and enjoy its multiple dimensions (which is not a reference to the 3D presentation). There’s a clever twist in the finale that won’t be discussed here, but it’s unique to animated films and will incite more laughter from the parents in the theater than the youngsters. This turn of events in itself is worth the runtime. In the end, the costs (both monetary and social) of The LEGO Movie are less than desirable, but it works on multiple levels as the best animated films often do, and provides a number of distinctive visual touches to keep the viewer involved and laughing.