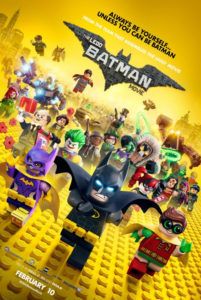 Movie mayhem and nonsensical bytes of randomness reign supreme in The LEGO Batman Movie, a commercial-of-a-movie designed for maximum irreverence. Brightly colored geometric shapes form into walking-talking advertisements, selling their counterparts on toy store shelves. All of it seems assembled for a target audience whose Ritalin prescriptions have run out. Aussie animation company Animal Logic once again brings a bazillion LEGO bricks to life, while a trifecta of editors (David Burrows, Matt Villa, John Venzon) chops the movie into dizzying cuts the human brain must process and dispose of milliseconds at a time. All of this leaves room for only the most generic of stories, rendering the experience notable only for its disposable quality. Children will love it.

The LEGO Batman Movie does not provide a sequel to its 2014 predecessor, the smarter-than-expected postmodern blockbuster The LEGO Movie, so much as a spinoff. The movie imagines a scenario and presentation worthy of Robot Chicken, the spoof-based Adult Swim show where toys come to life in stop-motion animation. Indeed, director Chris McKay began as an animator for several stop-motion shows on the Cartoon Network’s late night broadcast. Helming The LEGO Batman Movie, McKay’s approach is surprisingly straightforward and lacks edge—in that no humans appear as godlike figures presiding over the toy realm, and thus the sequel eradicates the sole element that made The LEGO Movie much more interesting than it had any right being.

Voiced by Will Arnett, Batman’s LEGO characterization behaves like a moody teenager reveling in his own dark basement, except the teenager is also a billionaire with an endless inventory of gadgets, vehicles, and microwavable lobster thermidor. Under his trusty butler, Alfred (Ralph Fiennes), Batman is a self-obsessed loner and proud of it, leading an egomaniacal lifestyle that results in a devastating case of loneliness. Nevertheless, he remains a comically cynical type who, inevitably, learns that prototypical children’s movie lesson about the importance of friends and family. Accordingly, he adopts Batman über-fan Dick Grayson (Michael Cera) and teams up with the new Gotham City police Commissioner Barbara Gordon (Rosario Dawson) to stop the Joker (Zach Galifianakis, unimpressionable). But the Clown Prince of Crime has his own issues and wants an archnemesis commitment. “I like to fight around,” explains Batman.

To be sure, every villain in Batman’s considerable rogue’s gallery appears in LEGO form, including some obscure names like the Condiment King, Egghead, and Polka-Dot Man for the most devoted fans. The more standard faces of The Riddler (Conan O’Brien), Clayface (Kate Micucci), Poison Ivy (Riki Lindhome), Bane (Doug Benson), Catwoman (Zoë Kravitz), and Two-Face (Two-Face) appear alongside a dozen other villains. Each of them has about one line of dialogue, if that, and seems present if only to justify their inclusion in the toy line. Meanwhile, in-jokes and references to the Warner Bros./DC wave of films going back to Tim Burton’s original Batman in 1989, and even further back to the zany 1966 Adam West starrer Batman: The Movie, offer humorous asides.

Just as The LEGO Movie boasted themes of nonconformity yet celebrated homogenization with the song “Everything is Awesome,” The LEGO Batman Movie pretends to be shrouded in darkness. But the movie is about as dark as Joel Schumacher’s Batman & Robin. The screen pops with radiant colors and jerky, fast-paced movements, while the mocking tone feels more appropriate for Airplane! or The Naked Gun. Unlike its predecessor, there’s nothing clever about the movie, as audiences have experienced this manner of self-aware parody before. Moreover, it contains at least one annoying double-standard when Barbara Gordon complains about being called Batgirl—“How about I call you Batboy,” she fires back—only to be called Batgirl for the remainder of the movie without complaint.

While I am fully aware that my own negative assessment of The LEGO Batman Movie represents a detraction from its general critical and audience admiration, I must assure you that my opinions do not spring from contrarian drives. Rather, I wanted to enjoy the movie and was looking forward to it; but instead, I was bored and exhausted by the experience, and I found it generally incoherent and empty. The sequel is the very definition of too much of a good thing. It’s overlong at 104 minutes, dragging on to the point of becoming tiresome. It attempts to deconstruct Batman in a witty and ironic way, yet its attempts prove unsophisticated, even for a children’s movie. At the same time, it continues the trend of dull declarative action statements prevalent in modern speech today (“You got this?” “Yeah, I got this.” “Okay, let’s do this.”). Worse, it tries to replicate the self-reflexive magic of the first and fails. The problem is, The LEGO Movie already explored the idea of toys-come-to-life to its limit; which is to say, once you’ve seen behind the curtain, it’s pointless to try to pretend you haven’t seen behind the curtain.