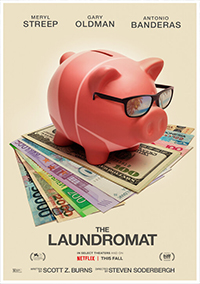 In The Laundromat, director Steven Soderbergh and screenwriter Scott Z. Burns tackle the Panama Papers scandal of 2016 with tongue-in-cheek humor. Taking a cue from Adam McKay’s The Big Short (2015), the Netflix production turns the subject of fraud, shell corporations, and tax evasion into the stuff of light infotainment. Over several anecdotal though buoyant interwoven narratives, the incredulous film hopes to draw out the world’s cruel and absurd financial corruption. Its lessons, structured around a series of Secrets such as “the meek are screwed,” compel us to laugh. And laugh we must; the alternative is that our heads explode out of rage and frustration. Soderbergh and his excellent cast, headlined by two Oscar winners and a roster of familiar faces, keep the material lively with colorful photography, playful animations, and wacky performances. But the last few frames walk the uncomfortable line between narrative filmmaking and a political statement, leaving The Laundromat feeling too preachy to embrace fully.

Our guides into this world of legal loopholes for the super-rich are Ramón Fonseca Mora (Antonio Banderas) and Jürgen Mossack (Gary Oldman), the former an erstwhile UN world-saver and the latter of presumed Nazi lineage. Together, they head the law firm Mossack Fonseca & Co. in Panama, which hides and protects fortunes belonging to some of the world’s 2,000 billionaires and 15 million millionaires. Decked out in tuxedos and martinis in hand, the narrators break the fourth wall and explain complex ideas in Layman’s terms, so the Average Joe might learn what perpetuates the class divide. When they define terms like “medium of exchange,” they break it down with a simple comparison to bartering with bananas, whereas they describe credit as “borrowing bananas from the future.” Unlike Leonardo DiCaprio’s Jordan Belfort in The Wolf of Wall Street (2015), Ramón and Jürgen hardly fall into the category of love-to-hate; nothing they say or do is so amusingly awful, it’s just awful.

Burns based the material on Jake Bernstein’s 2017 book, Secrecy World: Inside the Panama Papers Investigation of Illicit Money Networks and the Global Elite, though the treatment resembles the Soderbergh-Burns collaboration The Informant! (2009)—another info-comical film based on a nonfiction book, which exposed a lysine price-fixing conspiracy in the world of agriculture. The impetus finds grandmother Ellen Martin (Meryl Streep) trying to file an insurance claim after a freak tour boat accident leaves her husband dead. The boat company’s owners (Robert Patrick, David Schwimmer) attempt to contact their shady insurance company, which they hired only to save a few bucks on premiums. But the nonexistent shell company situated on the small Caribbean island Nevis has an executive (Jeffrey Wright) that does little more than sign his name and accumulate wives. Later, someone else points out, “The world is just men hiding behind piles of paper.” 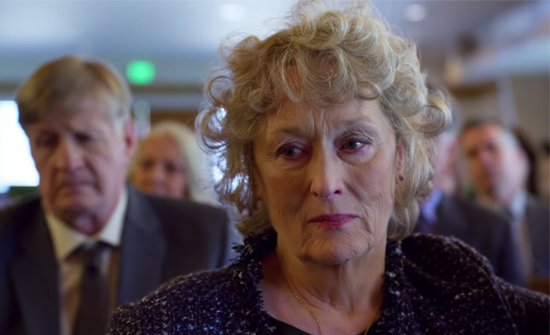 Ellen, an ordinary person just trying to figure out why the system appears to be broken, follows a paper trail that leads to one false front after another, but eventually, her research points to Mossack Fonseca. The company has a slippery morality about its scheme, evidenced when a lowly employee, also the owner of 25,000 shell companies, dies in a freak accident, requiring a quick replacement to sign thousands of documents that will transfer ownership. Other seemingly random asides and cutaways show how the Mossack Fonseca clientele take advantage of their services. An inordinately wealthy man (Nonso Anozie) bribes his daughter with the gift of a worthless shell company to atone for sleeping with her best friend. A ruthless Chinese businesswoman (Rosalind Chao) poisons her associate to ensure that she’s not the least bit exposed to risk. When their scheme is leaked in the press, Mossack, behind Oldman’s Herzogian accent, utters the line, “Bad is such a big word for being such a small word.”

In the end, there’s a reveal involving one character that feels manufactured for shock value, and as effective as that shock is, I couldn’t tell you what the trick is supposed to mean. Regardless, The Laundromat concludes in such a way that recalls Charlie Chaplin’s The Great Dictator (1940). The horrific-yet-funny tone earlier in the film gives way to a sharp change, a speech on the part of Ellen, which breaks down, through a couple of wigs and the dismissal of an accent, to reveal Streep. The actress has used her status for political speeches at award shows, while her performance in Steven Spielberg’s The Post (2017) certainly shows her disdain with the current administration. Here, she takes a literal stance for liberty and, while this critic does not argue with the content of the message, the delivery and the context feels awkward for an otherwise glib film.

“Lord, when exactly do the meek inherit the earth?” asks a character. It’s the prevailing theme that those less fortunate get the shaft, while the upper-crusters weasel their way out of paying taxes or having their books scrutinized. People like Ellen, and the loved ones of the 21 other people who died in that boat accident, suffer while the one-percent buy themselves another home. While trying to approach with levity what is gravely serious for many, The Laundromat never quite convinces the viewer, despite its flashiness. Of course, since Soderbergh shot and edited the film, it looks great. And it’s fun to see the supporting actors like Sharon Stone, Matthias Schoenaerts, Will Forte, Chris Parnell, and James Cromwell play in this sandbox. But it’s a considerable step down from his other Netflix film this year, High Flying Bird. The film’s soft news approach, meant to evoke indignation, fails to take hold or make the viewer incensed by the injustice of it all.