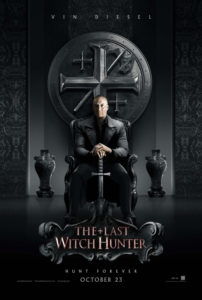 Determined to build himself yet another franchise, producer and star Vin Diesel overestimates his capacity as a box-office draw in The Last Witch Hunter, a fantasy-thriller that has more in common with his lower-budget B-movie fare (like Riddick) than his freakishly popular Fast and Furious series. In his follow-up project to The Crazies remake from 2010, director Breck Eisner, son of former Disney chief Michael, operates in a series of tropes and clichés, neither improving nor innovating upon them. To be sure, the screenplay by Cory Goodman, Matt Sazama, and Burk Sharpless combines familiar elements from various other paranormal hunter-killer titles, including Hellboy (2004), Constantine (2005), and Dylan Dog: Dead of Night (2011), each of which borrowed from Men in Black and its sequels. Here, Diesel plays a meatheaded immortal who, along with a priestly sidekick, long ago vowed to slay evil witches.

In a prologue curiously devoid of information, the film opens sometime in the Middle Ages (presumably), with a group of witch hunters journeying to confront the dreaded Witch Queen, who caused the Black Death, I guess, because she despises humanity. Julie Engelbrecht plays her under layers of CGI, bony hair, and surrounded by computery branch-tendrils. The hunters find her keeping house under a Sleepy Hollow-esque tree, after making their way over unnamed mountains in a presumably European country (their accents are either indiscernible or nonexistent). Noble warrior Kaulder (Diesel), in gravelly badass mode, faces off against the Witch Queen and kills her, but before she dies, she curses him with immortality. Of course, the Witch Queen also happens to be the nasty creature who killed Kaulder’s wife and child, seen only in dreamy flashbacks, saddling Kaulder with a typically tragic backstory.

Transitioning to modern-day New York, Kaulder, now a stylish and bald loner, works for a Christian sect that has paired with good witches determined to keep magic a secret. Those unfortunate souls who practice black magic or use their magic against humans face capture or death by Kaulder’s weaponry. And so, paired with Dolan the 36th (Michael Caine, in father-figure mode), the immortal witch hunter investigates crimes of witchcraft. When Dolan is murdered by a warlock named Belial (Olafur Darri Olafsson), his replacement, the fresh-faced Dolan the 37th (Elijah Wood), joins the fight. During Kaulder’s hunt for Belial, he finds a witchy ally in club owner Chloe (Rose Leslie, from Games of Thrones and lively here). Now saddled with sidekicks galore, Kaulder uncovers a plot to resurrect the Witch Queen, who’s weapon of choice, by the way, is swarms of badly animated flies.

The Last Witch Hunter borrows a page from “The Seventh Son Book of Subtlety” in its overstuffed and cheap-looking special FX. Take the Witch Queen, who has so little time onscreen—most of which is shot in zippy camera movements by d.p. Dean Semler and chopped up by editors Chris Lebenzon and Dean Zimmerman—that she never becomes an iconic or even visually memorable villain. That’s a chronic condition of The Last Witch Hunter as a whole; the film vomits out so many ideas about magic and sorcery that the audience never gets a handle on the fantasy rules, if any exist. For example, some witches can be killed by gunshots or knives, while others require Kaulder to speak special words (“By iron and fire!”) before he slices them with a flaming sword. Anything can happen for no reason at all, and the audience is expected to go with it, because who really thinks about a Vin Diesel movie anyway?

With the film’s $90 million price tag (which I assume mostly went to the cast, since the FX look cheap), the filmmakers depend on Diesel’s Fast and Furious bankability to sell a dark, lame-brained adventure. But The Last Witch Hunter is an obvious bomb. Diesel’s appeal, whatever that may be, doesn’t improve matters. The actor has none of the gravitas someone who has the experience of centuries should—not with that glossed-over look in his eyes, his signature smirk, and monosyllabic vocabulary. Despite being alive for hundreds of years, Kaulder still manages to look and talk like a slab of meat. Diesel’s presence doesn’t account for the rest of the movie being a sloppily assembled and predictable mess; however, his fans are bound to make all manner of apologies for the outcome. With silly ideas like witch prisons, plague trees of moldy crabapples, and dream-walking rendered without even a momentary feeling of wonder, The Last Witch Hunter is a derivative and uninspired disaster.