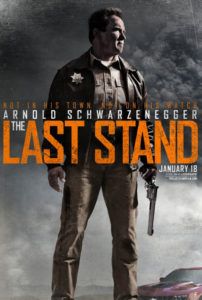 In The Last Stand, Sommerton Junction sits on an old forgotten Arizona road a few hundred miles south of Las Vegas, just before entering Mexico. This sleepy border town populated with quaint folk is surrounded by farms and desert. But there’s a plague on the terrain: deadly plot holes drain all plausibility from the land and its inhabitants, making suspension of disbelief all but impossible. It’s any wonder how Sommerton Junction residents survive from day to day given that all reality, even loosely applied movie logic, seems to have been sucked into these surrounding fissures. But then, one best not look for credibility in an action flick starring Arnold Schwarzenegger. Action movies and Schwarzenegger—two components that should immediately reset your expectations for something more blockheaded than your average Hollywood film.

After becoming California’s governor in 2003, Schwarzenegger’s action hero career went on hiatus to serve his political ambitions. Now that his terms of office are over as of 2011, Schwarzenegger is back—as he so frequently noted in films like The Terminator and The Running Man—although not in any memorable way. He’s made cameo appearances in The Expendables and its sequel, but The Last Stand represents his first starring role in nearly a decade. Evident here is how, unlike fine wines or some cheeses, action heroes do not improve with age. There’s a point when all Planet Hollywood-brand actors—the Schwarzeneggers, Stallones, Van Dammes, and to a lesser extent the Willises (though, Willis is still capable of greatness, as Looper proved)—became less heroic entertainers and more self-referential celebrities who keep working if only to remain in the public eye. Most have ceased to develop and now exist as meta-style celebrities, watched more for nostalgia and irony’s sake as opposed to any genuine thrills they might elicit.

One glance at Schwarzenegger’s saggy reptile skin and electro-shock hairdo and we know this isn’t the same action idol from greats like Predator and Total Recall. His hair matted and spiked, his body rigid and inflexible, Schwarzenegger somehow manages to look like he’s always just gotten out of bed. He plays Sheriff Ray Owens, a former LAPD narcotics officer who saw so much action in the Big City that his current small-town position in Sommerton Junction feels like early retirement. Along with three hapless and inexperienced deputies (Luis Guzmán, Jaimie Alexander, and Zach Gilford), Owens is warned that a fugitive convict might pass through his town to escape FBI pursuers and enter Mexico. Said baddie is Cortez (Eduardo Noriega), a criminal who escapes capture during a seemingly covert prison transfer and races toward the border at 200 mph in a Corvette with 1,000 horsepower. On Cortez’s tail is Agent John Bannister (Forest Whitaker), who does little more than shout into microphones about the need to catch Cortez before he escapes.

At first glance, believe it or not, things look promising. South Korean director Kim Ji-woon makes his Hollywood debut after helming some stellar material, namely The Good, The Bad, The Weird (2008) and I Saw the Devil (2010). Kim also brought S. Korean cinematographer Kim Ji-yong and composer Mowg to lend their talents. Action scenes are visceral, and despite the use of Shaky-cam we always know what’s happening onscreen. The problem is Andrew Knauer’s screenplay: a dim-witted concoction of action movie clichés so predictable that almost every scene offers something questionable. None of the many reported rewrites on this thing helped. Consider Agent Bannister, the kind of dull movie character who finally realizes crucial information long after the audience has wondered why he hasn’t realized it yet. Every stupid decision he makes is designed to make Owens look smarter. Of course, given Schwarzenegger’s worn-down appearance and inability to make dialogue sound intelligent, by comparison, Agent Bannister seems like the worst FBI agent ever. Schwarzenegger’s strength as an actor has never been about being the smartest person onscreen.

Shifting gears after every super-criminal line of dialogue, Cortez races toward Sommerton Junction in his souped-up Corvette, his goons, led by Burrell (Peter Stormare, doing a weird, almost unidentifiable Creole accent), racing to complete a makeshift bridge so Cortez can cross an otherwise impassable chasm. Owens and his deputies confront Burrell and Co. in downtown Sommerton Junction, and fortunately, everyone in town has left to watch a high school football away-game—they’re fortunate because it’s during this showdown that the relatively mild proceedings thus far become exceedingly bloody. This is an action movie that could’ve been made in a PG-13 way without compromising the story’s integrity. Instead, armed thugs are sliced in half by a Gatling gun spread, their brains blown out mid-air, or altogether exploded in a spree of gore. It’s all very tasteless and against the movie’s initial lighthearted bumpkins-against-bad-guys tone. The action builds not to a massive explosion or high noon shootout, but to a high-school grade mat wrestling match between Schwarzenegger and Noriega. No contest.

Now that the end of the review is approaching, I realize Johnny Knoxville’s wacky sidekick and annoying gun hoarder character Dinkum has yet to be mentioned. Consider it mentioned. Knoxville has the unique ability to make whatever he’s in much, much worse. Looking rough and terminally unfunny, he makes this movie embarrassingly bad, when it could have just been barely watchable. Overall, Schwarzenegger delivers a couple chuckle-worthy one-liners. When he smashes through the front of a diner to dodge gunfire, patrons ask how he’s doing. “Old,” he replies. That’s funny. But The Last Stand has far too little characterization of Sheriff Owens for Schwarzenegger to make the role memorable. There’re no personal stakes for the character beyond his sense of duty. Now is the time where Schwarzenegger should be playing more with his age and accepting his ‘developed’ state as a performer, as opposed to attempting a rekindle of his action hero flame that went out long before he took office. As is, it’s an uncomfortable display in a movie whose only quality is to serve as Schwarzenegger’s comeback vehicle. After this, he’ll need another comeback.