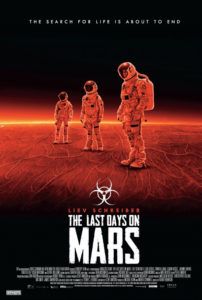 Will there ever be a successful mission to Mars, or will the drive for Martian exploration and colonization always end in disaster? Cinema certainly has a grim opinion on the subject. Going back to William Cameron Menzies’ Invaders from Mars in 1953 or Byron Haskin’s Robinson Crusoe on Mars from 1964, astronauts landing on the red planet usually end up fighting for their lives with aliens or some other unknowable force. Robot mechanics go murderously haywire for the crew in Red Planet (2000), whereas John Carpenter’s underrated Ghosts of Mars (2001) featured Ice Cube and Natasha Henstridge battling with murderous Martian spirits. Brian De Palma’s underwhelming sci-fi flop Mission to Mars (also 2000) had a curiously optimistic view, suggesting a Martian race birthed humanity, but still nearly the entire Earthling crew died to achieve this realization.

Released by Focus Features International, The Last Days on Mars is a derivative indie sci-fi shocker that follows the movie trend of doomed missions to Mars. Based on Sydney J. Bounds’ short story The Animators, the movie has a promising start but then quickly devolves into a familiar zombie programmer, recalling, in a way, the similar 2005 gorefest Doom. The first full-length feature directed by Irish helmer Ruairi Robinson, the movie was shot primarily in the Jordanian desert region to create an authentic-looking scorched quality to the planet’s barren surface. Robinson delivers some carefully composed framework in the early scenes, with cinematographer Robbie Ryan offering nods to Alien and 2001: A Space Odyssey, and therein emphasizing the director’s own confidence behind the camera. Nevertheless, it doesn’t take long for all this potential to wash away in a spray of mindless bloodletting.

With just nineteen hours left on their six-month scientific mission, the eight-person international crew on science base Tantalus makes a profound discovery of bacteria in a soil sample—proving there is life on Mars. They’re all tired and homesick, and this last-minute find would seem to have made their hardships worthwhile, except its discoverer (Goran Kostic) has gone missing down the steam-filled cavern where the bacteria was found. Before long, the rest of the crew is faced with infected crewmembers dying from bacterial exposure and returning to life, looking blackened from physical rot and, for one reason or another, violent and hungry for blood. Before turning, the infected victims become extremely thirsty; one assumes the Martian zombie things are hunting humans to quench their thirst. After all, as one alien from Star Trek: The Next Generation observes, humans are just “Ugly giant bags of mostly water.”

Liev Schreiber leads the notable cast as an American engineer, while Romola Garai (from Atonement) is his would-be love interest and British medic. Elias Koteas plays their even-tempered Canadian leader, Olivia Williams is a brutally scientific Brit crab, and Johnny Harris is a nervy Brit psychologist. The quality of these actors and their devotion to their roles makes this space-zombie fare better than it has any right to be. All of them are locked in a familiar sci-fi-infused Ten Little Indians scenario filled with isolation and death, reminiscent of Carpenter’s The Thing. Clive Dawson’s screenplay contains a number of scenes filled with tense zombie thrills, and Robinson delivers them with enough control to keep us watching, even though as the movie gets more violent the presentation gets shakier and shakier visually. Nevertheless, for what it is, you could do a lot worse (see the first paragraph).

Not only does Mars have a bad track record for its visitors on film, but the locale rarely inspires impressive box-office performance. Paul Verhoeven’s wild sci-fi adventure Total Recall may be the sole exception. More recently, Walt Disney’s duo of ill-fated missions to our sister planet in Mars Needs Moms (2011) and John Carter (2012) failed to draw audiences, losing the studio huge amounts of money in the process. Fortunately, the low-budget production of The Last Days on Mars should perform well enough in limited distribution and VOD to earn back its modest budget. However, the movie doesn’t do much to improve the planet’s reputation for underwhelming voyages within our solar system. Robinson’s visual polish and the strength of the cast keep us engaged, but the material proves describable only through other films and never stands out on its own.