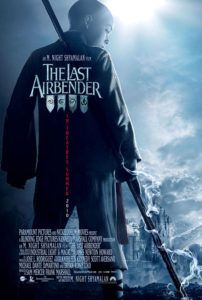 Intended as the first in a trilogy, it would be shocking if we ever see how the story plays out for M. Night Shyamalan’s The Last Airbender. From the generic acting to the hackneyed storytelling, this film is profoundly bad, and it’s anyone’s guess why studios keep entrusting Shyamalan with their money, particularly after duds like The Village, Lady in the Water, and The Happening. Indeed, as negative word-of-mouth spreads, no doubt this summer movie poison will croak and die at the box office, leaving Paramount Pictures to doom the production into the ‘Hell of Trilogies Never to Be Completed’ along with the likes of Eragon and The Golden Compass. Meanwhile, at least the few moviegoers even moderately interested in the film can turn elsewhere to finish the story.

Based on the very watchable Nickelodeon animated TV series, the live-action film opens with the sub-title “Book 1: Water”, as the cartoon offered three complete seasons, or ‘books’, that each served as an entry in an over-arcing trilogy. The show completed itself after three seasons, and happily ended where it intended to. While concise and determined to tell an enclosed story with a foreseeable end, the show, and productions such as The Lord of the Rings Trilogy, might’ve served as a lesson to Paramount, suggesting they should have made all three entries at once. Because they didn’t, and because they placed a once talented but now off course filmmaker in charge, it’s unlikely the second and third films will ever be made.

Just like the show, The Last Airbender concerns a world made up of four societies, and each represents a specific element (water, fire, earth, and air). Within each faction, a talented few can “bend” their element, controlling waves of water, bursts of flame, walls of dirt, or gusts of air. Always there is one in this world who can control all four elements; this person is called an Avatar (given the popularity of James Cameron’s Avatar, the filmmakers opted not to follow the cartoon’s exact title: Avatar: The Last Airbender, so as not to confuse audiences). Except, when the film begins there hasn’t been an Avatar for a century.

While hunting near their village, Inuit-like water people Katara (Nicola Peltz) and Sokka (Jackson Rathbone, from the Twilight series) find Aang (Noah Ringer) frozen in the ice. He bears the tattoos of the Avatar, and sure enough, he’s The One. Before long, a rebel group of Fire people, led by the outcast Prince Zuko (Dev Patel), capture Aang and plan return him to Zuko’s father, the insidious Fire Lord (Cliff Curtis) who banished Zuko for cowardice. If Zuko returns to his former kingdom with the Avatar, all will be forgiven. Aang quickly escapes Zuko and joins with Katara and Sokka to unite the other tribes together against the Nazi-esque Fire tribe. Meanwhile, Aang, who was born with the ability to bend air, trains to develop his other bending talents, beginning with water.

In cartoon form, the story works because all of the apparent fantasy-adventure clichés, which have been better implemented in The Lord of the Rings and Harry Potter franchises, can defeat the viewer’s weak suspension of disbelief thanks to the animated medium. In live-action form, the story feels like a hodgepodge of fantasy formulas shaken together into a sour potion, with no consideration of how many times audiences have seen this same type of movie in the last decade. Then again, the blame cannot be placed solely onto the story or the medium, but more rightly on Shyamalan’s script. Given the quality, or lack thereof, of the dialogue, and his shameful reliance on several deus ex machina devices to advance the plot, the film plays out like the antithesis of a how-to-write-a-screenplay instruction manual.

Worse than Shyamalan’s screenplay is his choice of actors. Forgiving the somewhat controversial choice to cast Caucasian actors in roles that were decidedly Asian in their cartoon form (the cartoon adopts the style of a Japanese anime), the actors themselves seem incapable of emoting any feelings behind their lines. Peltz, who narrates the film, speaks as though she’s reading a script of her junior high’s production of Oliver Twist, but doesn’t grasp in the least what she’s reading. And Ringer, the star of the show, could have been replaced with a cardboard cutout and we wouldn’t have known the difference. What’s more, watching bad actors wave their hands about to conjure up a wind storm or a wave of water becomes a test of the audience to control their laughter.

Much has been said about the substandard visual presentation, delivered to some theaters in both 3-D and 2-D formats. While this review is based on a 2-D screening, it’s enough to know that Shyamalan didn’t initially shoot the picture with 3-D technology. It was converted after-the-fact, and the typical result of such retrofitting is worse than your standard 3-D presentation, if that’s possible. Perhaps enough audiences will see enough lousy 3-D movies like this and finally put an end to the tiring 3-D gimmick. But even with only two dimensions, the film still looks inferior, with plenty of cheap CGI renderings of fireballs and water tendrils to leave us unimpressed.

As for Shyamalan, one can only hope that he finds his footing again. Or maybe it’s that his good films—The Sixth Sense, Unbreakable, and Signs—were just flukes. Time will tell. The Last Airbender plays like it should be the work of a low-grade hack with little-to-no experience behind the camera, but instead it’s by a director who not so long ago was praised as one of today’s finest new storytellers. How sad. If this clumsy and unnecessary adaptation does anything, perhaps it will inspire audiences to seek out the cartoon who might not have otherwise. And if not, then this film is completely worthless.