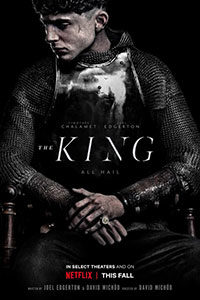 “I think this makes for a much better story,” says Falstaff, played by Joel Edgerton in Netflix’s The King. It’s a winking line that seems to acknowledge how Edgerton co-wrote the film alongside director David Michôd, and that they made some alterations to Shakespeare’s series of plays known as the Henriad. Their changes will raise eyebrows among The Bard’s purists, notably the film’s portrayal of Falstaff as a hardened soldier who comes to a noble end on the battlefield—as opposed to the lazy, rotund, lovable, and disgraced comic knight. The revisions service Edgerton and Michôd’s desire to mount an impressive and serious medieval epic, a classical genre of political intrigue and massive battles. But in this expensive, expertly cast production, the film’s impressive ensemble gathers for a work of rather dryly portrayed history. Timothée Chalamet plays to type by rendering Henry Prince of Whales as an angsty young monarch with daddy issues, while Robert Pattinson makes a riotous appearance as an outrageously sadistic Dauphin of France. Such inspired casting aside, the adaptation takes questionable liberties by removing the poetry from the language and changing the nature of the characters. The result, while capable and diverting, supplies a slightly more engaging copy of last year’s Outlaw King, another Netflix release similarly preoccupied with historical mise-en-scène over our emotional investment in the unfolding events.

Michôd treats the material with a grave, respectable coldness that should imbue the material with gravity but instead places the viewer at a distance. The film opens in the “early 15th century,” when the Scots and Welsh war against the ailing King Henry IV (Ben Mendelsohn) of England. Believing his king misguided, Henry Percy (Tom Glynn-Carney) leads a rebellion, which incites the craggy leader to call upon his heirs and name his successor. It will not be his eldest, the “whoring fool” called Hal (Chalamet), who wastes his time with his friend John Falstaff in Eastcheap dives. Instead, the King chooses his youngest, his eager but softer son Thomas (Dean-Charles Chapman, fated to play weak kings, apparently, after his role as Tommen in Game of Thrones), who takes an army to face Percy on the battlefield. But the initially noncommittal Hal arrives to undercut his brother and challenge Percy to single combat, hoping to prevent the needless slaughter of hundreds with a tense full-armor battle between two men, who proceed gasp for breath and writhe around in the mud. It’s proof of Hal’s ignorance that he believes his reluctant killing of Percy will somehow spare England future conflict.

Committed to the notion that he is not his father’s son and will lead England into a time of peace, the newly crowned Hal, now named Henry V, receives warnings from those whispering in his ear. And despite his outward confidence and clarity of purpose, Hal’s an impressionable lad. His top advisor William Gascoigne (Sean Harris, born to play shifty roles) warns, “Problems that are left unattended become crises,” referring to the long-percolating tension with France. Conveniently enough, a paid French assassin signals a clear act of aggression against Hal’s throne, and without delay, the lispy Archbishop of Canterbury (Andrew Havill) underwrites the ensuing conflict. Even as he leads an army onto French soil, something he initially refused to do, the idealistic young king believes in the certainty of his throne and never suspects he’s being manipulated, even after the brutally honest Falstaff warns, “A king has no friends. A king only has followers and foes.” Not until the final scene does Hal grasp how a king too can be a pawn, but by then, the audience has grown weary of seeing Hal continue to ruminate yet still fail to see the obvious. 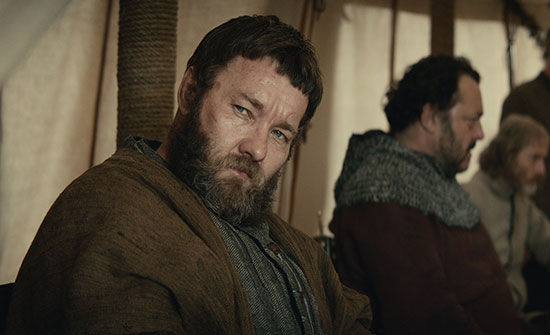 Michôd is a talented filmmaker, evidenced by his Australian crime saga debut Animal Kingdom (2010) and his spare, post-apocalyptic The Rover (2014). But with Netflix, he has made two airless films, including the forgettable Iraq War satire War Machine (2017) and now The King. There’s much to admire about his latest, from the believable production design by Fiona Crombie and the costumes by Jane Petrie, especially the armor and its use in combat. Cinematographer Adam Arkapaw, who shot Michôd’s first film, uses candles, window light, and overcast skies to illuminate his scenes, while he creates a brown soup of colors that make up the era’s clothing and stony architecture. Surface aesthetics aside, The King doesn’t moisten the dried well of Anglophilic stories in cinema. Long scenes of men debating strategy and tactical maneuvers, the standard speech to the battle-ready troops, and the epic Battle of Agincourt accentuated by slow-motion to reflect the slog of fighting in the mud—it all looks beautifully staged but somehow lifeless. Here’s a film that manages to make a trebuchet launching fireballs into a French castle seem dull.

In their adaptation, Edgerton and Michôd have robbed their characters of Shakespeare’s sensationalism and melodrama, so that anyone familiar with even the adaptations by Laurence Olivier in 1944 or Kenneth Branagh in 1989 will notice the comparatively muted treatment. All the complexities of war’s horror, glories, and moral questions have been excised in favor of something that resembles Braveheart (1995) or Kingdom of Heaven (2005)—but in a tired style. The script is light on character or scenes of necessary emotion that would engender us to Chalamet’s inward leader. Of course, he must remain closed-off to preserve some measure of composure. Still, the film could have used a scene early on, in the Henry IV sections of the story, to establish Hal’s chummy relationship with Falstaff that must change after he is crowned. The acting proves to be the film’s greatest strength, with Edgerton and Pattinson the clear standouts. The latter’s sassy, psychopathic Dauphin is comically cruel and has a pitch-perfect conclusion that nonetheless feels out of place in this even-tempered film. Also look out for brief appearances by Thomasin McKenzie as the Queen of Denmark and Lily-Rose Depp as Catherine of Valois.

With most of its runtime moving at a deliberate clip, The King ends with a few spectacular scenes that might make the whole 140-minute ordeal worthwhile. Any wavering on the film may be solidified by that terrific, truly Shakespearian final sequence, where Hal learns what a dope he’s been, if only because it’s the first time our protagonist seems to actually know what he’s doing. But Michôd’s persistent understatement fails to earn the desired emotional impact of Hal’s victory or Falstaff’s death in battle, even though the ending chosen by the filmmakers may appear better and more conclusive on paper. Shakespeare never gave Falstaff a satisfying end, leaving filmmakers like Orson Welles to create one in his brilliant Chimes at Midnight (1965). However, Welles embraced Falstaff’s defects of character. Edgerton and Michôd see Falstaff as a man redeemed and cleansed by action and, ultimately, sacrifice on the battlefield—not that they detailed his flaws to begin with. In any case, their lofty claim of a “better story” is disproved with characters who rarely come alive, leaving the film’s often gorgeous visual luster to seem populated by historical figures and not human beings.