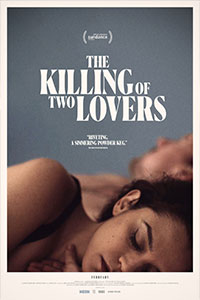 Maybe it’s because every day in America the headlines report another mass shooting or domestic situation that ended in gun violence. But when The Killing of Two Lovers opens with a man standing over his wife and her lover, clutching a gun with desperation in his eyes, we assume the worst will happen eventually. Then again, this scenario is bound to alert any viewer. Shaken out of the moment by a sound in the next room, the husband sneaks out the window and conspicuously jogs a half-mile down the middle of a Utah road to his father’s house, where he’s staying. It’s an unbroken shot against the opening credits. With this opening sequence, writer-producer-director-editor Robert Machoian injects a sense of dread beneath every subsequent interaction. But he fools us into thinking we’re watching a country noir or domestic thriller, and perhaps we are. Yet, by the end, the film has more on its mind than suspense.

On a trial separation from his wife Nikki (Sepideh Moafi), David (Clayne Crawford) begrudgingly accepts their agreement to see other people. Though, he misses their four children and doubtless never intends to date anyone else. The reality of another man (Chris Coy) in bed with his wife has shaken him, and he feels as though Nikki is stringing him along. When alone, he unleashes his frustrations on a punching dummy, which, ominously, he later takes to a field and shoots with a revolver. He also follows the other man with murderous intent, but he backs down at the last minute. With his family, however, he appears calm and understanding. He tells his troubled teen daughter that her mother’s “not the villain” and proves surprisingly adept at deflating tension with humor. When he interacts with his children, they share Mitch Hedberg jokes and seem like a loving family. When he talks to Nikki, we get glimpses of a sensitive man who hardly seems like the killer type.

Still, Machoian implants an underlying suspense that something terrible will inevitably transpire. He accentuates that feeling with the help of Danish sound designer Peter Albrechtsen, who creates not so much a traditional score as a series of sound effects and tones that capture David’s psychological state. We hear the clicking of a gun’s chamber, a sound whose tempo picks up during heightened moments as though the violent clockwork in David’s mind is ticking down. Discordant sounds and descending notes create an aural texture that anticipates something dreadful on the horizon. But perhaps David, a former punk rocker now writing bad country songs (his original tune “I’m a Damn Fool” is heartfelt and soulful, if lacking a melody), will find an artistic outlet for his anger over his rocky marriage.

From the outset, The Killing of Two Lovers looks and feels like the latest indie darling made in a throwback style by director David Lowery and starring Casey Affleck (A Ghost Story, The Old Man & the Gun). Machoian uses many of the same aesthetic tricks as Lowery, and Crawford has a similar internalized intensity as Affleck. The production’s Sundance-ness signals itself not just with the Utah location but with cinematographer Oscar Ignacio Jiménez’s first shot in the now all-too-repopularized boxy Academy Ratio, in which faces often fill the entire screen like a portrait. In contrast to the narrow frame, the open scenery looks like an old Polaroid photo that just began to fade. The visual treatment traps these characters in a closed-off world. You get the sense they have nowhere to go, heightening the tension.

Rather than descending into a genre exercise inflected with indie aesthetics, The Killing of Two Lovers weighs the emotional strain and vulnerability of marriage. It requires not only love, a neighbor tells David, but also respect. The murder hinted by the film’s title and the opening scene becomes a misdirection for how marriage engulfs our emotions and, at times, can drive us to the brink—in both positive and negative ways. Another director would have explored these ideas in a film like Little Woods (2019), a similarly modulated story about crime in a small-town setting. Instead, Machoian has more on his mind, delivering a film that plays with our expectations in a way that deepens his characters and makes them into more than pawns in a genre variation, refreshingly so.