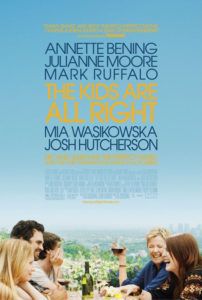 Married lesbian couple Jules and Nic, played by Julianne Moore and Annette Bening respectively, try to explain why they watch male gay pornography to their teenage son named Laser, played by Josh Hutcherson. In her nervously honest response, Jules explains that sexuality is a complex thing, and that sometimes lesbian pornography looks unnatural because the often straight actresses are pretending to be gay. While the The Kids Are All Right has very little to do with porno, this scene brings scrutiny onto Moore and Bening, who seem to pass their own test by, despite being straight, playing believable, fully described lesbian characters with incredible authenticity.

Written with striking emotional honesty by director Lisa Cholodenko and co-writer Stuart Blumberg, The Kids Are All Right is terrific and refreshing, as it dares to explore people as opposed to typical character types. What’s more, the people therein are capable of conveying complex emotional situations without putting a spin on the material. Devoid of melodramatic embroidery or even a smidgen of irony, the realness of the story never reduces the material to what could’ve easily been a touch of novelty, given the presence of lesbian parents. But the characters in this near-perfect film, neither one-dimensional nor stereotypical, could have all been reduced to phony, transparent tropes. They weren’t and that remains the film’s greatest triumph.

That Jules and Nic are lesbians is a matter-of-fact detail here, accepted as though there wasn’t, sadly, a strong movement against their type of relationship. Suffice it to say, if you have a problem with it, don’t see this film. The rest of us who recognize that such families are not rare in the real world will enjoy the film for ourselves. Jules and Nic live a comfortable life in Southern California, and have two well adjusted children, the aforementioned Laser and their eighteen-year-old girl Joni (Mia Wasikowska). The children were conceived via a sperm donor, and because Laser feels the need to relate to some masculine force in his otherwise female dominated life, he convinces Joni to look up their donor-father.

Enter Paul, a charming restaurant owner and purveyor of organic vegetables with a born-bachelor lifestyle, played by Mark Ruffalo. When they first meet Paul, he isn’t quite the typical man’s man father figure Laser was hoping for, but his adventurous “doer” attitude appeals to Joni. Of course, when Jules and Nic find out their children have contacted this man, they’re apprehensive at first. Nic, a detail-oriented doctor and provider for the family, doesn’t see the need of this wanderer-of-a-man in their lives. Jules, who’s more flaky and uncertain about where she’s going, finds Paul full of himself, though she comes to relate to him in a crucial way. Alowly Paul grows on both Jules and Nic, because they can’t help but deny his effect on their kids.

So far in this review, the descriptions of these people are shorthanded. But without going into more detail about the plot, know that as the story progresses so do the characters. These aren’t predictable situations that the audience anticipates, rather a growth of three-dimensional characters in their progressively deepening relationships. While much of the film is played for comedic effect, it would be too easy to deem this a comedy or even a drama, but to a certain extent a slice of real life. All around, the actors are able to bring living, breathing existence to these people, in an ensemble performance that should be considered among the best of the year. Bening and Moore simply disappear into their roles, emanating with what feels like an emotional depth of years together. We believe their lasting marriage, the ups and downs over the years, and the struggle required to keep their marriage—or any marriage—together.

Cholodenko formulates The Kids Are All Right into a deeply affecting, bittersweet testament to the vulnerability of families and the hardships essential to maintain them. It avoids cheap shots and labels where it could have exploited them. It approaches its subjects with moving insight that, when afterward viewers are reflecting on the film as it applies to their own lives, will be impossible to ignore. Its audience never feels manipulated by the turns of these people, who are so palpably entangled with each other that it sometimes hurts in that unexpected way films sometimes do. With a hearty dose of wit and modernity, this smart and sophisticated little gem practices what it preaches in its lessons about family: It’s a film that, like families, can be hard work but remains worth it in the end.