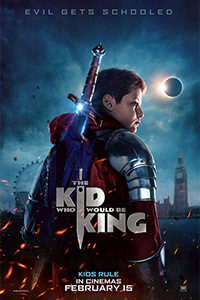 Joe Cornish has a thing about kids who save the world. In Attack the Block (2011), his outstanding debut as writer and director, a teen gang becomes unlikely heroes as they stop an alien invasion from spreading throughout London. Cornish’s gig as co-writer that same year on The Adventures of Tintin: Secret of the Unicorn found the legendary French boy-adventurer stopping an evildoer from getting his hands on untold treasure. And as a co-writer of Ant-Man (2015), he conceived a story about an immature ex-con, basically a man-boy played by the perpetually youthful Paul Rudd, who becomes a superhero and saves the world from miniature soldiers. With The Kid Who Would Be King, Cornish once again tells a fast-paced, sprawling fantasy, although his target audience here is far younger than his earlier efforts. Aiming at the preteen demographic, Cornish delivers an escapist undertaking that 10-years-olds will love.

An animated prologue situates the movie in the realm of Arthurian legend, giving a brief storybook rundown of Merlin, Morgana, Arthur, and the Knights of the Round Table. After that, we meet 12-year old Alex (Louis Ashbourne Serkis, son of Lorraine Ashbourne and Andy Serkis), who saves his best friend, Bedders (Dean Chaumoo), from the bullies Lance (Tom Taylor) and Kaye (Rhianna Dorris). But after he’s chased onto a construction site, Alex finds a sword lodged in a concrete slab, just like in the book about King Arthur that his absent father gave to him as a child. After pulling the sword from the stone, Alex and Bedders suspect that it might actually be Arthur’s sword, Excalibur. When Alex claims the sword, he awakens Merlin (Patrick Stewart), who hides in disguise as a boy named “Mertin” (Angus Imrie).

Merlin convinces Alex, Bedders, and soon Lance and Kaye, to undertake a mission to stop Morgana (Rebecca Ferguson), an evil sorceress whose power grows with the looming eclipse, just four days away. Merlin shows up when the kids need him, performing a neat procession of snaps, claps, and hand gestures to conjure magic—a welcome change to the usual abracadabra or wand-waving. But otherwise, they’re on their own, bickering and in-fighting, while searching for the entrance to Morgana’s lair. It’s a journey fraught with danger, as they face a small army of smoldering undead soldiers on horseback, a surprisingly ineffective force easily pummeled by middle-schoolers. Along the way, Alex meets the Lady of the Lake (well, her hand and forearm anyway), learns to be a hero, works through his daddy issues, and saves all of Britain with the help of his entire school. Cornish puts together a few impressive action sequences, making the most of those scary riders-from-hell. But the climax turns into a blur of CGI that numbs the viewer’s brain.

Cornish’s script is less edgy than his earlier work. This leaves something to be desired for adults in the audiences since, unlike many family releases these days, there’s far less here for adults than other, similar movies—making it more children’s entertainment than family-friendly. The trailers spoiled Cornish’s cleverest visual gags and one-liners, including a bit about a round table that isn’t so until they put the flaps into place. Much of the movie is a plain-and-simple adventure, adhering to the precepts identified in Joseph Campbell’s The Hero with a Thousand Faces, except with kids. Filled with boilerplate messages about the value of telling the truth, honoring loved ones, and believing in one’s self, the screenplay takes our hero on a predictable path, with only one or two moments that divert into an unexpected direction. The straightforwardness of it all, coupled by the two-hour runtime, makes the movie feel overlong.

Throughout The Kid Who Would Be King, Cornish reiterates his assessment of the modern age as one that beckons Morgana because it’s a leaderless world driven by fear and division, resulting in an unsubtle commentary on Brexit. The message, a positive one to be sure, suggests that children have the capacity to make this a better world. However conventional such a commentary may be, it’s effectively placed into the movie, which finds children coming together to stop an evil force. The child actors, especially Serkis and Imrie, give strong enough performances to enliven the material, and the presence of Stewart and Ferguson doesn’t hurt either. The movie may prove forgettable for adults, but this critic wants to send it back in time to the 10-year-old me, who would love this sort of thing.