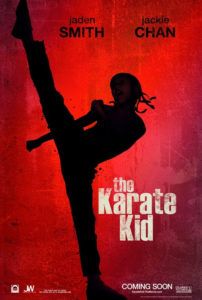 Why does a movie called The Karate Kid feature no karate? That’s the question audiences should be asking themselves after watching this remake of the 1984 original of the same name, which replaces the title’s martial art with kung fu. The distinctions between the two styles of fighting are subtle, the difference being that karate was developed in Okinawa, Japan, whereas kung fu was developed in China, where this film is set and was shot. As it turns out, the remake was a co-production between China, which put forth a not-inconsiderable percentage of the budget, and Hollywood. No doubt the Chinese money played a major role in changing the martial art represented in the film, leaving the title and its story in contradiction with each other.

But when the filmmakers realized they were altering the schema of the original The Karate Kid, why didn’t they just resolve to call it The Kung Fu Kid? The answer: The Kung Fu Kid doesn’t have that name-brand recognition that Hollywood, in all their remake-frenzied enthusiasm, feeds on nowadays. The resulting effect is a moderately racist, certainly ignorant choice on the filmmakers’ part. Though that’s not the last bad decision made by the producers. The remake, directed by Harald Zwart (Agent Cody Banks), makes subtle tweaks to the original film’s scenario. The plot remains much the same, but details such as setting and the protagonist’s age are modified to fit the backer’s wishes and to conform to the star.

Much like John Avildsen’s original, which was a re-hash of his own Rocky, the remake involves an underdog who trains to overcome adversity at a climactic showdown in the finale. When uprooted from Detroit and relocated to Beijing because his mother (Tarji P. Henson) lands a new job, young Dre Parker (Jaden Smith) finds himself displaced and ultimately bullied by cruel pre-teen gangleader Cheng (Zhenwei Wang), a student in a local kung fu school where the instructor teaches “No mercy!” Dre can’t speak the language, but that’s okay, because most of the characters he encounters conveniently speak English, including his apartment building’s maintenance man, Han (Jackie Chan). Han opts to teach Dre real kung fu, which leads to a training montage at notable Chinese monuments, such as The Great Wall of China. Eventually, Dre defends his honor at a kung fu tournament and earns unanimous respect.

Smith, whose powerful parents Will Smith and Jada Pinkett-Smith produced the film and secured their youngster the lead role, arrives onscreen acting like the son of, well, Will Smith. With a chip on his shoulder and an ego to boot, the young Smith’s portrayal of Dre holds no comparison to the compassion exuded by Ralph Macchio in the original. Smith plays Dre as a cocky and swaggering sometimes-jerk who’s disrespectful to his mother and hardly puts in any effort when being trained by Han. Instead of the old wax-off, wax-on trick, Dre is taught to hang up his coat, put on his coat, take off his coat, and then hang it up again. Except, Han doesn’t teach Dre exactly how those moves should be completed, so the eventual reveal where Dre can miraculously do kung fu from seemingly insignificant training falls flat. Dre ends up being not so rude that the audience doesn’t like him, but he’s not charming the audience the way Macchio’s onscreen innocence did in an instant. Meanwhile, Chan can’t hold a candle to Noriyuki “Pat” Morita, who held dignified airs as Mr. Miyagi that Chan, with his turns in self-parodying action-comedies like Rush Hour and Shanghai Noon, has squandered any hope for.

What’s more, Smith was an eleven-year-old while shooting this film, though his character is twelve, but he looks about eight or nine. This presents a major problem when we’re made to have our hearts swell when he kisses his violin-playing sweetheart (Wenwen Han), or engages in rather violent fights that look ridiculous because he and the other children in the film are so small. One scene where Han breaks up a gang of bullies attacking Dre features Jackie Chan cleverly defending the boy, and even though Chan doesn’t dish out any direct punches or kicks on the pre-teen bullies, he’s still knocking around twelve-year-olds. In the original, the Karate Kid, who actually practiced karate, was a teenager well into high school, so his romance was believable, as was the cruelty of the bullies. Here, everyone feels shrunken down, and so the drama of the story is miniaturized as well. No one wants to see little kids get beat up, not by adults and not by other little kids.

Inflated and unnecessary at nearly two-and-a-half-hours, The Karate Kid offers nothing but indifference (if not anger) for those familiar with the original, and little emotional rewards for audiences new to the material. No doubt this PG-rated remake will have younger viewers asking their parents to enroll them in the local kung fu school, although the kind of pre-teen violence depicted here may not be the best lesson for children. More than its potential questionable effect on youngsters, the film itself is a forgettable product-of-a-movie that was so transparently conceived by money that it’s sickening. When the original is readily available on DVD or cable television, it’s easier to stay home for a much more rewarding experience.