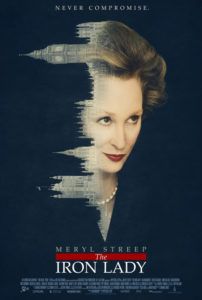 As a biopic about Great Britain’s longest serving Prime Minister, The Iron Lady represents Margaret Thatcher from a neutral perspective. It has no opinion about its much-debated subject, though the people who lived under her three terms would have much to say. Some remember that Thatcher’s tough policies in her first term lifted Britain out of economic turmoil, whereas others remember how her same hard-headedness hindered the country’s forward progress a decade later. She presided over the Falklands War and later saw the Berlin Wall come down. She is a figure about whom much could be said, and yet the filmmakers find little to say. Director Phyllida Lloyd and screenwriter Abi Morgan tender a dispassionate historical account that uses standard biopic devises to look at a life without judgment—even though that’s exactly what would have make the picture interesting—and instead provide a showcase for star Meryl Streep, who gives another fine, but unmemorable performance.

The bulk of the film takes place sometime in the 2000s, as octogenarian Thatcher (Streep) struggles with her incapacitating age and growing senility. Her husband Denis (Jim Broadbent), having passed away of cancer some years before, appears to her in hallucinations as she dodders about in her pajamas one evening. These unflattering “present day” scenes give way to brief flashbacks that detail key moments in Thatcher’s life. The flashbacks occur when she stumbles upon a photo or a stack of home videos and suddenly loses herself in a memory. Told entirely from her perspective, we see jumbled images alluding to how the young Thatcher (played by Alexandra Roach) rises from a grocer’s daughter to an Oxford-graduated Conservative Party leader. She butts heads with the exclusive lot of men serving in Parliament, wins them over with her authoritative tone of voice, and finds her way into 10 Downing Street. Meanwhile, Denis is her shadow; although the character has no dimension, Broadbent lends him a certain passable charm.

There’s much we do not see of Thatcher’s career. Whether the filmmakers believed their audience would already know her history, or just took the easy way out, who can be sure? We see little of her children, especially her estranged son, Mark. Her family life, it is acknowledged, is overlooked for her career. As for her political career… The film never mentions how in 1981 she refused to acknowledge IRA detainees as political prisoners, which ultimately led to Bobby Sands’ hunger strike (although the resultant assassination attempt in 1984 occupies about a minute of screentime). Her alliance with American President Ronald Reagan was glossed over, as is her role in ending the Cold War, which becomes a fact without detail during a montage. It’s never mentioned how she ordered an unpopular bombing on Lybia in 1986. And the film only clues to the cause of her resignation being her stubbornness about integrating Great Britain into the greater European Union.

Of course, The Iron Lady’s entire raison d’être is to supply Streep with another iconic performance. This project seems like it was built from the ground-up as a platform for Streep, who, in playing a major political figure from the last half-century, creates a huge amount of awards season prestige for U.S. distributors at The Weinstein Company. But, Streep isn’t given much room to take the character into remarkable or certainly not controversial realms. There’s so much potential for good drama in Thatcher’s life, but the filmmakers rely on her “present day” scenes to carry the narrative. More than half of the film involves the elderly Thatcher stumbling around and talking to the “ghost” of Denis—or at least it feels like half of the film. Slow pacing carries these scenes on and on, and the effect is quite tiresome. Streep, her considerable talent notwithstanding, can do nothing to improve the proceedings.

The final result recalls J. Edgar, another 2011 biopic that attempts to make a potentially divisive figure relatable to everyone by focusing on a universally human characteristic. With Hoover’s life, director Clint Eastwood told a subtle but ineffective love story, and gave us little of the scandal a film about the notorious FBI director should contain. This is a familiar instrument in the biographical film toolkit, employed since Charles Foster Kane’s boyhood memories of his sleigh Rosebud became a secret shared only with the viewer. Here, Lloyd and Morgan sum up Thatcher’s life by suggesting it found meaning through Denis, a dormant presence in Thatcher’s life based on what’s shown, and a relationship represented as one-sided. Ultimately, the film’s purpose becomes how Thatcher’s strong-mindedness could not only overcome being a woman in a male-dominated field, but could overcome even a natural decline in her own mental faculties, all so she could allow herself to finally let go of Denis’ memory. Yet, because the filmmakers do such a poor job of establishing the significance of Denis in Thatcher’s relationship earlier in the film, this dramatic climax has few emotional sparks.

British audiences will likely find the treatment flavorless, and even Anglophiles in U.S. markets will find little to savor here beyond Streep’s performance. The fault lies on the filmmakers. How do the director of Mamma Mia! and the writer of Shame, two projects as polarized as they come, assemble for a film like this one? On all fronts, The Iron Lady is a disappointment—a missed opportunity for one of those great, informative filmic biographies that are becoming rarer all the time. Biopic filmmakers have become so obsessed with putting a human face on their subject that they forget to think critically about them. Ironically enough, in the film, Thatcher makes this very point, that people these days feel too much and place too little importance on thinking, on ideas. What becomes apparent as Lloyd and Morgan ignore this insightful Thatcher principle within their own film, is how little they understood their subject.