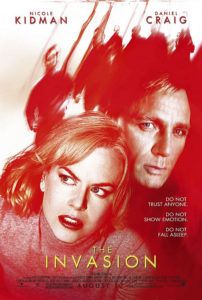 Emerging from production hell, The Invasion finally hits theaters even though it wrapped the majority of principal photography back in early 2006. Apparently, studio heads at Warner Bros and producer Joel Silver were none too impressed with director Oliver Hirschbiegel’s vision. The Matrix writers Andy Wachowski and Larry Wachowski were hired to actionize the existing material by adding a scene here and there. James McTeigue, director of V for Vendetta, filmed the new scenes speed up the proceedings. But if Warners was happy with the Wachowski’s script doctoring and additions, I’d be surprised, if not shocked. Nothing about the end result makes much sense, even for movie logic; the plot creates gaping holes in every new scene. And while rewrites and new directors taking over a project isn’t unheard of and has resulted in some fine filmmaking (take Spartacus), there’s an omnipresent feeling that The Invasion has been torn apart and reassembled so many times that the filmmakers forgot what they set out to do in the first place.

The credits claim the film is based on the classic 1955 science fiction novel The Body Snatchers by Jack Finney, which would make this the story’s fourth adaptation to film. The first was back in 1956 with Don Siegel’s Invasion of the Body Snatchers and introduced the filmgoing world to pod people—alien replicants reproduced in giant pea pods while humanity slept. The story is ripe for metaphoric application, and Siegel used the pod people as a stand-in for Red Scare paranoia, the fear that Communists could by anyone. Philip Kaufman directed a superior remake of the same name in 1978 that some claimed to be about Watergate, which is about as believable as Jaws being about eating disorders. Kaufman’s many-layered masterpiece satirized Generation Me’s conceit by placing its San Franciscan characters in a life-or-death identity crisis. Abel Ferrar made Body Snatchers in 1993, and this slow-moving, dull version took place on a military base for added paranoia.

The Invasion borrows the most from Kaufman’s take, but not enough. It begins with a space shuttle that returns to Earth carrying an alien spore. Upon reentry, it sprinkles contaminated debris from Washington to Dallas. Everyone who touches the debris is infected, taken over by an alien virus when they sleep, and then from person to person the alien disease is communicable. On the scene of the crash is CDC suit, agent Tucker (Jeremy Northam), whose eventual infection with the alien spore allows the aliens to concoct a new “super flu” story in the media and demand citizens get inoculations secretly infected with the alien virus. As a result of infection, victims are covered in what looks like a layer of gestative snot when they sleep. When they awake, they’re turned. And when we see this process, we get waaaay too many scenes taking us into the blood stream, watching as CGI spores swallow up the human cells of some victim. These moments are sort of like Innerspace, except without Dennis Quaid or a shrunken-down vessel.

The Invasion is a movie of unbelievable coincidence: Nicole Kidman stars as Dr. Carol, a psychiatrist who is a little too slow to realize infected people aren’t behaving as they should. Carol’s ex-husband is Tucker, coincidentally enough, and is the first man to be infected. Their son Oliver (Jackson Bond), amazingly, is immune to the alien spore, and so he’s the living key to creating a vaccine. We learn this because one of Dr. Carol’s patients, also coincidentally, is immune. Also, Carol just-so-happened to be walking by as infected policemen drags the patient away. Carol’s doctor friend Ben (pre-Casino Royale Daniel Craig), by chance, has a medical researcher friend, Dr. Galeano (Jeffrey Wright), who seems to know the ins and outs of this alien raid after a few hours of research. Once Carol realizes what’s happening, she heads out on a mission to recover her son, who of course represents a cure.

The film’s few thrills involve Kidman on the run from infected humans, which is only entertaining for the first five minutes or so of chase, or whenever you realize that she hasn’t removed her heels during the getaway, whichever comes first. (It’s also thrilling to guess what kind of accent she’ll do next. Early on she speaks with a Southern accent; at times we hear her original Australian; but through most of the movie she’s regionless American.) The Invasion is also wrought with inconsistencies. In one scene, Tucker attacks Carol and her son. Rather than remaining an impassive member of his collective, Tucker suddenly becomes the typical thriller villain, reciting “You’ve been a bad boy!” or the equivalent thereof to his frightened child. One can imagine the production troubles and reshoots account for continuity errors. But the film’s thrills are lessened further thanks to choppy editing style that intercuts subsequent scenes, perhaps for dramatic effect, perhaps to make the plot move faster.

The movie’s “infected” are in no way akin to the rampaging undead from 28 Days Later, but they are zombie-like. Here, they’re similar to the ones in Night of the Living Dead, only with the ability to maintain conversation—however bland it may be. Little emotion is shown, and Dr. Carol realizes something is up when she’s walking down a busy city street but she doesn’t hear any noise. No music. No chatter on cell phones. Nothing. They always look each other in the eye. They travel in groups. And they puke on you when they want you to join their club. Zombie movies are often metaphoric, with the undead serving as an allegory fpr greater issues. But The Invasion isn’t that smart. It wants to be, but isn’t. References to the Iraqi and Darfur conflicts ensue, only to be later used as examples in suggesting the potential bliss of peace in a world inhabited by warless, emotionless alien beings. Does that mean war makes us human, or is the movie a subtle pro-war argument? There’s also reference to Kidman’s character, as a psychiatrist, being guilty of de-emotionalizing people with meds. Is this film an indictment of psychiatry or world violence? The messages are too sporadic to know, and filmmakers no doubt forgot what they set out to do a long, long time ago.