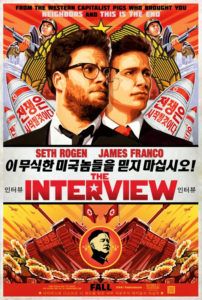 As much as this critic would like to altogether avoid discussing the larger issues stemming from The Interview, the cyber-terrorist hack into Sony, and the off-then-on-again release schedule of the film, ignoring them would not paint an entire picture of the film itself and its impact. Suffice it to say, Sony intended to release a political satire about North Korea. Supposedly the country responded by hacking into Sony and, while releasing oodles of confidential information, threatened to attack theaters if The Interview was released. Both major theater owners and Sony backed down and pulled the film from distribution, but President Obama and many others condemned their response, suggesting Sony gave in to terrorist demands and wasn’t fighting for every American’s right to freedom of speech. So back into theaters it goes, albeit in a very limited release, with a major push on the VOD market instead. The whole story ends not with a bang, but with a whimper.

Doing my part as an American citizen in support of free speech, I sat down with my wife in the comfort of our home the day after the film’s December 25 release (the nearest theater showing it was 25 miles away), recovering from the previous day’s excesses of food and presents, and brought it up for the meager $5.99 asking price. If anything, the geopolitical mayhem caused by this Hollywood bromance seems quite absurd once you consider the final product, which isn’t much different than the last film by Seth Rogen and Evan Goldberg, called This is the End, wherein religious beliefs were lampooned in a bromance about the rapture. Although there’s more plot in The Interview than their previous film, there’s still enough random cameos and raunchy riffing courtesy of stars Rogen and James Franco, not to mention Randall Park, who plays “supreme leader” Kim Jong-un as a megalomaniacal dude who secretly drinks margaritas and listens to Katy Perry. It’s all worthy of a laugh if you’re not taking it too seriously, you’re not too easily offended, and you’re ready for an extended joke about metal suppositories.

The setup is pure comic audacity. It follows celebrity talk-show host Dave Skylark (Franco) and his trusted producer/best friend Aaron Rapaport (Rogen) as they receive an invitation from Kim Jong-un, an unabashed Skylark fan, for an exclusive interview on N. Korean soil—this just after N. Korea proves they have nuclear missiles that can reach U.S. shores. Before heading out, Skylark and Rapaport are contacted by two CIA agents (Lizzy Caplan and Reese Alexander) and are asked to “take out” Kim Jong-un. The boys reluctantly agree and soon head into the tiger’s den, cuing many discussions of “honey potting” and “honey dicking,” whereby a female or male respectively behaves in an appealing way to win another party over. When they arrive, Kim gushes over Skylark, and the two become close, sharing stories of unsupportive fathers, lost puppies, and their affinity for pop culture. As Skylark has second thoughts about the proposed assassination, Aaron falls for a N. Korean producer (Diana Bang) who wants Kim out of power.

Plenty of Asian stereotypes are wholeheartedly embraced throughout, as are juvenile jokes made about Kim’s claims that he hasn’t the need for orifices with which he can urinate or defecate. Kim’s caricature isn’t as cartoonish as that of Kim Jong-il in Team America: World Police, but it’s a caricature nonetheless. Under a thin commentary that Kim Jong-un is a master manipulator of his people, and that exposing him for a charlatan is a better tactic than an assassination attempt, lies the film’s raison d’être: a destination buddy comedy in which Franco is the over-the-top talk show host and Rogen is his straight man. Franco’s Skylark is so absurdly behaved that you’ll either find his character irritatingly lovable or just-plain-aggravating. He goes from showcasing Joseph Gordon-Levitt and a litter of puppies on his TV show to believing his story will be the next Frost/Nixon. He’s in tune with a film that doesn’t mind turning the dial to 11—consider how Rogen’s character defends the captured N. Korean control room and loses fingers Frodo-style (just one of the many Lord of the Rings references throughout).

In proportion to the uproar surrounding its release, certainly The Interview is underwhelming. Rather than a taut propaganda piece and condemnation of N. Korean ideologies, it’s as though screenwriter Dan Sterling, who conceived the story with Rogen and Franco, read an article or two about N. Korea and decided to respond the best way Hollywood knows how—through pop-culture. There aren’t staggering political blows or edgy commentaries here; The Interview amounts to a piece of bubblegum entertainment, no different than having N. Korea raid the White House in Olympus Has Fallen or invade the U.S. in the remake Red Dawn. Indeed, N. Korea is an easy device for entertainers because the country is not well-liked globally, and the target is easier and more consumable than any current alternative. Doubtful Rogen and Goldberg ever meant to cause any worldwide commotion with their shallow politics and base humor, because what they’ve done is create a funny, silly, stupid comedy that will make some people laugh, others not so much. Any response beyond that is an overreaction.