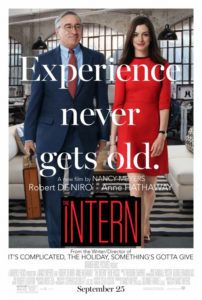 Champion of absurd, unrealistic romantic comedies (like What Women Want and It’s Complicated), writer-director Nancy Meyers also happens to be a champion of the career-minded businesswoman. Consider her 1987 hit Baby Boom, which starred Diane Keaton as an executive who inherits a baby. Keaton’s character was quirky, of course, but also troubled and challenged at the workplace by sleazy men vying for her job. Eventually, she finds balance and becomes an entrepreneur, carving out a niche market for herself, inspired by her babe. Meyers produced and wrote that charmer-of-a-screenplay, and she tries something very similar with The Intern, which stars Robert DeNiro and Anne Hathaway. Once again Meyers examines the life of a businesswoman, but this time it’s in a modern “CAS” workplace. The gender politics aren’t as pronounced this time around; neither is conflict or comedy. But the film has its charms, too.

First and foremost, the cast. DeNiro and Hathaway make a fine pairing (and fortunately, not a romantic one). Hathaway plays the overworked and disorganized Jules, the creator of a successful online clothing startup called “About the Fit” that boasts a progressive, independent workspace. She has a rocky marriage, a stay-at-home husband and a cute daughter, her investors want her to consider hiring an experienced CEO, and she’s barely keeping everything afloat. Somehow, her soon-to-boil-over situation isn’t apparent to her. Meanwhile, her office institutes a “Senior Intern” program, where retired persons will work alongside younger, e-commerce savvy associates, if only to keep busy and learn a new trade. Enter Ben (DeNiro), a kind widower with decades of executive business experience and panache for organization. He’s assigned to Jules personally, and I’m sure you can sense how it’s all going to end up.

At first, Jules’ life seems quite pleasant for a boss, although everyone in the office keeps telling Ben how harsh she can be. Her tough-headedness is never really represented onscreen; she’s certainly nowhere as acerbic as Meryl Streep in The Devil Wears Prada, which was Hathaway’s big breakthrough as an adult actor. Not until too long into this meandering two-hour comedy do we see how much Jules really needs someone like Ben in her life—a centered, structured, and advice-giving father figure. Jules has no apparent father, and her mother (heard only in curt telephone conversations) has no love or support to offer. Ben’s experience and general kind-heartedness help reinforce Jules’ independence. Unfortunately, by the end, Jules doesn’t reach that conclusion by herself. She needs help from a former male executive to find herself in a good place.

In that respect, the movie should have been called “The Executive”, since Ben’s only real conflict concerns keeping busy and helping Jules. He joins the intern program to fill his days, to prevent himself from becoming bored or restless. While there, he makes friends with other coworkers and interns (Adam Devine and Zack Pearlman standout), he starts a romance with the house masseuse (Rene Russo), and he finds himself needed again. The narrative arc for Ben has far less dramatic potential than that of Jules, but it’s quietly enjoyable, if somewhat tedious watching the inner workings of a modern workplace unfold. Throughout, Meyers concocts a few madcap comedy situations to break up the otherwise low-key tone. One sequence, which doesn’t help the story so much as wake the viewer up, involves Ben and some coworkers breaking into Jules’ mother’s home to delete a cruel, accidentally sent email. It’s a funny moment of comic relief, but utterly unnecessary.

There’s a lot of that in The Intern. Meyers pads her story with subplots that go nowhere, each involving various coworkers and their lives. Most of them are shrug-worthy and could have been chopped to focus the story on Jules and Ben. Overall, the lighthearted tone is maintained by the pleasant leads and the corny score by Theodore Shapiro, as well as occasional laughs. Viewers will find themselves smiling throughout, except for a turn in the third act that veers the movie off into more serious territory involving an affair. This leads to a conclusion that leaves The Intern in a not entirely satisfying place from a dramatic or comedic standpoint. It also mixes any perceived messages one could glean from the movie about strong, independent businesswomen making it today. Meyers seems to argue that true independence is impossible; everyone needs support. But the examples she offers (a father figure and forgiven unfaithful husband) certainly throw a wrench into any clear message about gender politics, if a message was intended at all.