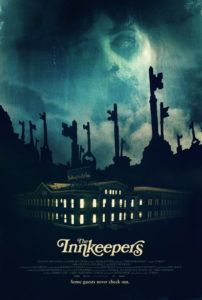 After his modest indie hit with the 1970s slasher throwback The House of the Devil in 2009, writer-director Ti West again explores vintage horror with The Innkeepers, a slow-burning spookhouse yarn that harkens back to ‘50s and ‘60s ghost movies. Fresh off the festival circuit and premiering on various VOD distributors courtesy of Dark Sky Pictures, this mild horror-comedy will find devoted followers in the same audiences that enjoyed West’s previous effort, and detractors in those who realize his plotting isn’t as significant as his style. Admirably, the film’s deliberate pacing puts concentration on mood over typical modern horror concerns such as shocks and bloodletting. But for all its low-key appeal and likable main characters, West’s scenario spends far too much time building up to scares and not enough time effectively implementing them within a worthwhile story.

There’s only a few days of business left at The Yankee Pedlar Inn, a quaint hotel located in downtown Torrington, Connecticut before it closes for all time. With most of the rooms vacant and stripped, the staff is comprised of two remaining employees, the tomboy Claire (Sara Paxton) and the nerdy Luke (Pat Healy). When they’re not being slightly rude to the two or three guests occupying the remaining rooms, these two use their down time at the front desk for idle talk and exploring their mutual fascination with the paranormal. Luke, having constructed a rather pathetic website containing videos of his ghostly encounters in the hotel, has audio recording equipment to capture ghost sounds. Claire is convinced that the emptiness of the hotel will be a prime atmosphere for spirit activity. As the two alternate shifts, the hotel’s emptiness overnight is enough to give you the willies or put you to sleep, but the natural and comic banter between these two characters keeps us interested.

The hotel has its own haunted-house legend about a former guest, a bride-to-be no less, who hung herself, and the former employees who tried to hide her death to preserve the inn’s business. Now the hotel’s rooms and banquet hall carry wraithlike whispers of the wronged party who cannot rest, and Claire spends her time walking about with a headset and microphone in hopes of recording the sounds. But are these sounds made by the woman who hung herself? One of the guests, grouchy actress-turned-medium Leanne (Kelly McGillis), hints that the spiritual presence hiding down in the hotel’s dark basement (where else?) is actually three ghosts. The plot seems to approach something monumentally scary, in particular after a near-catatonic old man checks in, asks for a specific room, and then commits suicide in the bathtub. And before long, Claire and Luke are headed into the basement with an iffy flashlight (no flashlight has ever worked in horror movies). Unfortunately, none of these plot elements come together in a way that makes much sense.

West presents the story in chapters for a typical three-act arrangement, followed by an epilogue. For more than an hour, his film follows Claire and Luke’s inconsequential but charming discussions, until the last twenty-or-so minutes when things begin to intensify. When it’s all over, we left scratching our heads and wondering what the point was. Most ghost stories of this sort have an explanation for what occurs, no matter how outlandish it may sound upon reflection. When Alison Lohman’s character in Drag Me to Hell was dragged to Hell, we understood that it’s because she inadvertently kept the Gypsy-cursed button. When Katie Holmes whispers at the end of Don’t Be Afraid of the Dark, we accept that she’s undoubtedly become one of those creepy tooth fairy under-dwellers. But there’s no lame explanation here. Instead, we’re left with annoying questions: Who were the three spirits that Leanne mentioned, and why were they suddenly reaching out to Claire? What made the bride-ghost attack Claire? Who was the old man? Why did he kill himself?? Was it significant that the owner was out of town on the last weekend the hotel was open (they mention it numerous times)?

All this uncertainty, but West hasn’t earned enough story credibility with the audience in the preceding runtime to justify such an ambiguous, The Shinning-like finale. It’s interesting that The Yankee Pedlar Inn is a real place where West and his production crew stayed while shooting The House of the Devil. It would be more interesting if the ghost story driving The Innkeepers were true, but alas, it is West’s invention. The director’s unfussy production values will strike genre fans as simplistic, perhaps to a fault once the plot dials up the scares, which ultimately fail to deliver. Paxton and Healy have just enough personality to keep the first two-thirds enjoyable; their funny and eccentric chemistry carries much of the film. But there’s no story to support the characters or West’s clear grasp of tone. His subtle stylistic control deserves admiration, even celebration, but only in the sense that the film is nothing beyond an exercise in mode, as opposed to a marriage of mode and compelling narrative.