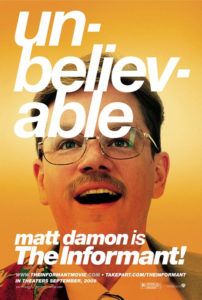 Steven Soderbergh leaps from genre to genre so much that identifying his particular style or directorial thumbprint remains a challenge for a critic. There’s a certain level of disconnection from his work as a whole because of this. Unlike clear-cut auteurs who use stylistic or narrative themes into their entire oeuvre, Soderbergh tells unique stories through an impressive array of formal bravado, always in support of the story and never to declare himself from behind the camera. And yet, Soderbergh’s films often achieve a harmony with each other.

Such is the case with The Informant!, which is not so much a corporate spy-thriller as a comedy, and not so much a comedy as an incredibly mordant satire whose punchline doesn’t unveil itself until the final moments. Based on the heavily publicized tale of the biggest whistle-blower in American history, the film takes place in the early 1990s. Matt Damon plays Mark Whitacre, biochemist and vice president at Archer Daniels Midland (ADM), the agricultural corporation responsible for worldwide price-fixing on all those yummy corn products everyone loves: artificial sweeteners, high fructose corn syrup, lysine, and so on. The foundation of any American meal.

Damon packed on 30 pounds and sports a silly mustache for the role, but the resulting performance was worth cutting down on his Jason Bourne exercise regimen. It might even earn him a much-deserved Oscar nomination. Whitacre sees himself as a “White Hat” against the “Black Hats” of ADM when he approaches the FBI agents assigned to the case (Scott Bakula and Joel McHale). But his information shifts here and there; he doesn’t disclose the whole truth—he’s seemingly incapable of that. He leaves crucial facts out of his accounts and completely fabricates other incidents. Still, he wears a wire and records decisive conversations between corrupt businessmen for the FBI. Is Whitacre a national hero? Is he just protecting himself? Is he a compulsive liar? You decide.

Part of the film’s joy is eventually learning how deep Whitacre’s lies go, which in turn exposes the character’s utterly muddled approach to self-preservation. He’s not premeditating some elaborate scheme to fool both ADM and the FBI; rather, he’s just saying and doing the first thing that comes to mind. At off moments, quirky inner monologues detail Whitacre’s stream of consciousness thought process. Some of these off-the-wall commentaries provide a clever metaphor for the given situation, while others are just random nonsense spinning in Whitacre’s head. Damon’s dedicated delivery and intense manner seem to contradict these random ruminations, except his character, we learn, is a walking contradiction. So Damon’s performance is actually pitch-perfect, a layered comedic performance worthy of Peter Sellers.

Whitacre’s behavior is baffling. He’s trying to commit check fraud under the noses of FBI accountants. He leaves a sloppy paper trail. He concocts a ridiculous story about goons grabbing him and tearing his jacket. What’s more, he’s certain that after the indictments and court cases calm down he’ll be promoted within his company, because they’ll see that he “did the right thing.” Everyone around him is afraid to tell him it’s not likely. What a clod. His character recalls Alec Guinness in Carol Reed’s Our Man in Havana (1959), the vacuum cleaner salesman who’s recruited as a spy and reports that the enemy is building an elaborate doomsday device. Trouble is, it looks suspiciously like a vacuum.

There’s not much to outwardly identify the film as funny, if you consider the price-fixing scandal at its center. It’s only funny when we see the movie as a biography about Whitacre (thus explaining the title’s punctuation). Soderbergh’s presentation appears shot through a soft-light filter, grainy and muted colors filling the frame, assembling a stylish-if-overexposed period setting. The tone feels severe, in the way that the Coen Brothers made Burn After Reading a serious espionage tale about stupid people. We have to hunt for clues, but we’re also supposed to be laughing. Listen to the absurd music, some of it played with a kazoo, which sounds like it should be orchestrating a bear balancing on a unicycle. Or look at the cast, largely made up of comedians and stand-ups: Joel McHale, Patton Oswald, Tom Papa, Rick Overton, Tony Hale, Bob Zany, and The Smothers Brothers all have substantial roles.

By the time that Soderbergh reveals that Whitacre embezzled $9 million from ADM, lied to everyone about everything, and wears a toupee, even if that last one wasn’t much of a secret, we’re effectively distracted from the real case. ADM robbed consumers of millions, and after the press and FBI were finished with Whitacre, only whatever minute energies were left went to the conglomerate. Granted, it resulted in the largest anti-trust case of its kind. But we’re kept wondering about Whitacre, even if he’s a nut that just can’t be cracked. Perhaps this clever film doesn’t seek to give answers, but rather leave you baffled about an individual intriguing enough as a case study that you don’t have to understand him. Then again, perhaps it means to illustrate how easily the media can twist a story into something minor, when the stakes should rouse a major scandal and ongoing distrust among American consumers about what they’re buying and eating.