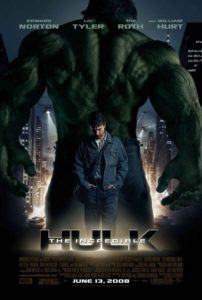 The Hulk has always been a fascinating if derivative character, taking initiative from any number of thematic concepts already extensively covered in cinema and literature. His duality is comparable to arcs explored in Strange Case of Dr. Jekyll and Mr. Hyde or The Wolfman, and his love life to that of King Kong and Ann Darrow. But The Incredible Hulk involves finding a balance between his two personalities—the gamma-ray-infused scientist Bruce Banner, played by Edward Norton, and his rage-fuelled alter-ego the Hulk, realized this time around with flawless computer effects. Banner’s struggle here is one of self-control in the face of his incalculable power, but also defending that power from those who attempt to replicate and abuse it.

The story begins with Banner hiding in Brazil from General ‘Thunderbolt’ Ross (William Hurt); he’s perpetually on the run from government agents, trying desperately to keep his monstrous outbursts under guard less they spill out into green-tinged violence. A “Days Without Incident” counter appears onscreen, noting Banner’s several months of control. Practicing meditation and managing his heart rate, Banner is learning to suppress his rage, while also fruitlessly testing potential cures to his gamma sickness. Inevitably, the government picks up Banner’s trail, and the chase begins again. Banner seeks out scientist and former love Betty Ross (Liv Tyler) to assist in finding a cure, but he risks putting her in danger not only with his own unpredictable detonations but those of her crazed father, who’s rapt with obtaining Banner’s unique mutated genes for experimentation. The General hires Special Forces operative Emil Blonsky (Tim Roth) to head the Hulk recapture team. After surviving an encounter with Banner’s less personable side, Blonsky finds himself starving for his own Hulk-like strength. Conceding to injections of a Super Soldier serum similar to what induced Banner’s accident, Blonsky begins to change: first just his endurance and speed and strength, and then his body. Soon he’s transformed into the Abomination, a massive creature only Hulk can defeat.

Just as Iron Man avoided safe choices in casting, the filmmakers at Marvel Productions played against type when compiling their cast. Offbeat, certainly not commercially viable names like Roth, Hurt, and Tim Blake Nelson (from O Brother, Where Art Thou?) comprise the roster. But this movie belongs to Norton’s multifaceted performance, another embodiment of character akin to Robert Downey Jr.’s Tony Stark. Likewise, Roth beautifully handles scenes where Blonsky’s lips smack at the thought of more power and strength—and an almost sadomasochistic attraction to his ensuing (and punishing) battles with Hulk. Meanwhile, Hurt’s eyes convey paranoia only years in the government’s intelligence community could breed. And in comparison, each actor here perfectly suits their role, whereas Ang Lee’s 2003 film Hulk misfired on every cylinder. 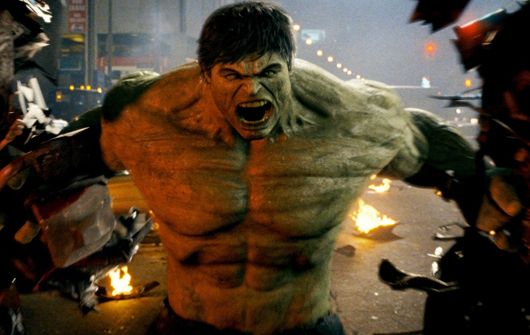 Because Universal never filmed a sequel to Lee’s letdown within the window specified in their contract, Marvel Productions reclaimed control of their property and initialized plans for their own sequel to Hulk. Writer of hit Marvel adaptations X2: X-Men United and X-Men: The Last Stand, Zak Penn was commissioned to write the script, which he formed as a direct sequel to Lee’s storyline. Director Louis Leterrier (The Transporter) was hired along with Norton, the latter of whom demanded script alterations. As Penn was unavailable, Norton rewrote the script himself, just as he had done with American History X. Norton’s draft separated this new Hulk story from Lee’s content, establishing the film as Marvel’s reboot of the franchise, readdressing, albeit briefly, Hulk’s origins.

Hollywood gossip claimed in recent months that Norton and Leterrier were battling over the final cut, a rumor perpetuated and perhaps exaggerated by the editor of Variety. The change concerned about twenty minutes of footage, largely character development delving into Banner’s psychological state—including a face-to-face with Doc Samson (Ty Burrell, a snippet of this scene appeared in the film’s trailer but not the final cut). Norton wanted a picture with ample emotional and dramatic background; the producers wanted to avoid a repeat of Lee’s lengthy, over-dramatic commercial failure. Such reports are further reinforced by Norton’s name not earning screenwriter credit on the final product, despite his heavily publicized rewrite of Penn’s script and creative input throughout the production. But due to WGA guidelines and their policy on giving the first author sole credit, Norton’s name was denied acknowledgment even in a co-screenwriter capacity because of a legal technicality. Yet costar Tim Roth insisted in an interview with Wizard that Norton was making changes every day to the script. Regardless of the hullaballoo, with a running time approaching two hours, the film takes the necessary steps to balance action and drama, making each of Hulk’s battles significant for Banner and his continuing growth. But that’s not to say I wouldn’t love to see a version of this film Norton approves of…

Behind-the-scenes drama aside, the end product births a reboot worthy of comparison to Batman Begins, wiping away the neon-green smear of Lee’s previous effort. The result is a darker movie to be sure, with a more pensive lead to intensify the inner struggle of Banner with the outward monster rage. Much of Leterrier’s film recalls the television show from the 1970s-80s in tone, taking the shape of an ongoing chase with Banner ostensibly a drifter. Several homages are made in respect to the show, including a Lou Ferrigno cameo and Craig Armstrong’s score that features “The Lonely Man Theme” from the TV series. And place your apprehensions aside; this isn’t the chalky hero made famous by Ferrigno, nor later rendered into lime greenness via poor computer animation in Lee’s film.

Leterrier’s Hulk is lean, rippling with veiny muscles and a stretched hide. His skin is olive colored and often shown in shadow, occasionally appearing almost gray. Using motion capture technology, Norton’s movements make Hulk’s transformation from human to superhero believable and don his physicality with presence, weight, and mass—all of which Lee’s incarnation lacked. Our hero doesn’t bound from mountain to mountain without so much as a puff of debris; rather, he is restricted by the laws of physics, leaving a path of destruction wherever he steps. And his fisticuffs with Abomination have substantiality despite the characters being illustrated with CGI.

Rarely do comic book movies escape the shackles of their genre and become superior filmmaking, more than just mere entertainment. Batman Begins, Hellboy, Iron Man, and bits of the Spider-Man and X-Men trilogies have challenged those limitations. The bulk of Marvel’s output has disappointed (see Fantastic Four, Fantastic Four 2, Ghost Rider, Daredevil, etc.), but those days are disappearing with Marvel themselves at the helm. They’re slowly (re)building their filmic superhero empire, character by character, toward an eventual movie based on The Avengers (yes, there’s even a cameo by Tony Stark  in The Incredible Hulk to deepen our anticipation for that project), and I can only hope that in the future they maintain the same quality control evident in their first two self-produced features. The Incredible Hulk comes little more than a month after Marvel Productions’ runaway hit Iron Man and deserves the same wildly unexpected attention and success.