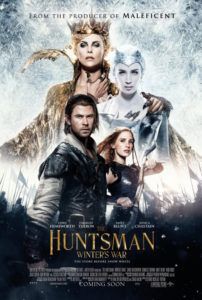 The Huntsman: Winter’s War is an unwieldy prequel-sequel hybrid to Snow White and the Huntsman, that adequate and forgettable 2012 title. Boasting impressive fantasy production values with a price tag upwards of $115 million, Universal’s attempt to capitalize on fairy tale action harbors embarrassing character descriptions and a derivative storyline, most of which can be traced back to Disney animation and The Lord of the Rings series. And, of course, classic fairy tales. Eschewing the original’s star Kirsten Stewart, the film features three of today’s finest actresses (Charlize Theron, Emily Blunt, and Jessica Chastain) alongside the brawny presence of Chris Hemsworth. Still, somehow, all three female performers feel underutilized. But then, when the entire existence of The Huntsman: Winter’s War feels unnecessary, it’s difficult to make good use of the talent involved both in front of and behind the camera.

Not long after Snow White and the Huntsman proved to be a box-office hit, Universal announced their initial plans for a sequel were changing, in large part because of Stewart’s hefty price tag (and her on-set extramarital affair with the film’s director Rupert Sanders, sparking a public apology and some fan dissent). Sanders was first replaced by Frank Darabont (The Shawshank Redemption), who soon departed for creative differences. That’s when Cedric Nicolas-Troyan, a first-time feature director who earned an Oscar nomination for his visual FX supervisor work on the original, was hired. Meanwhile, the sequel’s first-hired writer David Koepp (Jurassic Park) dropped out because the studio was going in a new direction with the sequel. Specifically, Stewart’s Snow White role was written out completely, leaving the film to focus instead on Hemsworth’s Huntsman. The result feels like the studio’s perfunctory cash grab, resulting in the departure of more experienced filmmakers who were replaced by less practiced talent (behind the camera) the studio could control.

Evan Spiliotopoulos and Craig Mazin’s routine screenplay omits its predecessor’s heroine, and in place of one classic fairy tale character the audience gets the writers’ take on a newer one: namely Elsa from Frozen. It’s impossible not to see strains of Elsa in pure-of-heart Freya (Blunt), the younger sister of Theron’s murderous Ravenna. In the opening scenes, Liam Neeson’s ham-fisted narration tells us the story takes place several years before Snow White and the Huntsman. Freya lives a serene life enraptured by her beau, a young Duke (Colin Morgan), whose child she bears. But when the child is murdered, the tragedy unleashes Freya’s dormant ice powers. Declaring “Love is a lie,” Freya retreats into her own fortress of icy solitude and surrounds herself with an army of abducted child soldiers whose families she killed. Among the children are Eric and Sara (Conrad Khan and Niamh Walter), who grow up into stalwart heroes played by Hemsworth and Chastain.

Much like Freya’s reliance on Elsa for character points, Sara relies on the independent-minded warrior ways of Princess Merida from Pixar’s Brave, complete with bow-and-arrow, flowing red hair, and Scottish accent. Once the cold-hearted Freya learns of Eric and Sara’s love, she separates them with a wall of ice, on the other side of which Eric sees Sara apparently slain. With Eric in mourning, the film jumps seven years, right passed the events in Snow White and the Huntsman. Because the screenplay demands it, the Huntsman is ordered to retrieve Ravenna’s magic mirror, as it was stolen from the off-camera Snow White and has since fallen into the ape-like hands of CGI goblins. Accompanied by two dwarves, Nion (Nick Frost, returning from the earlier installment) and Gryff (Rob Brydon), the Huntsman’s new trio is soon joined by the bantering female dwarves Mrs. Bromwyn (Sheridan Smith) and Doreena (Alexandra Roach), making a very Tolkien-esque troupe, except with cringe-worthy moments of comic relief.

The quest leads to more than one resurrection, as Sara reappears, apparently not dead, and having been manipulated by Freya to believe Eric abandoned her. It doesn’t take long before the two are making up in front of a warm fire, though. Soon enough, Eric and company are leading an attack on Freya and the newly resurrected Ravenna, now more evil than ever. The climactic confrontation looks like a Final Boss battle from a videogame. But the film also reserves a final act twist that was spoiled months ago by the trailers: Ravenna once asked her liquid metal magic mirror who was the fairest of them all, to which it prophesied Freya’s child, so Ravenna had the child killed. When the film makes this reveal, it doesn’t come as a shock at all, because Universal’s marketing department told us about it in the trailer. It’s also not a shocker when, in the last shot, Neeson’s epilogue narration duties ultimately declare, “And everyone lived happily ever after… Or did they?” With any luck, we’ll never know.

At least with Stewart’s absence the production still remains devoted to its female characters, which outweigh and outshine Hemsworth’s rather dull hero. Blunt’s role adds some much-needed emotional heft to the material; Freya’s storyline is tragic and sympathetic, and watching her become evil (she uses children to rid the world of all romantic love) is an engaging transformation. Chastain doesn’t have much of a character to play here, but maybe her display of action chops will earn her a role in a Marvel movie. Once again, most impressive is Theron, who demonstrates her ability to shift from a tough hero (see Mad Max: Fury Road) to an elegant and malevolent villain. The evil queens are each adorned with Colleen Atwood’s gorgeous costumes, while Eric and Sara look like they’re starring in the porno version of their own film, both clad in leather and metal (at any moment one suspects the boom-chicka-bow-wow music to start).

This is a good-looking film with sharp photography by Phedon Papamichael and superb production design by Dominic Watkins. But it takes more than pretty costumes and a fairy tale setting to make a solid fantasy film—as Ridley Scott’s empty-but-attractive Legend proved in 1985. Amid unintentionally laughable scenes (Blunt riding on a polar bear; a chemistry-less love scene between Hemsworth and Chastain), the screenplay doesn’t evoke much emotion and certainly fails to carve out a place in our memory banks. Worst of all, the film’s garbled association with its predecessor makes the entire experience awkward, as it’s painfully obvious why Stewart doesn’t appear onscreen, though her character is mentioned several times throughout. Universal’s transparent attempt at furthering an unsung franchise is desperate for success but doesn’t try anything new. Not unlike recent examples such as Batman v Superman: Dawn of Justice, My Big Fat Greek Wedding 2, and Zoolander 2, nobody really wanted this sequel-prequel thing, and now that it’s here, audiences should find something better to do with their time.