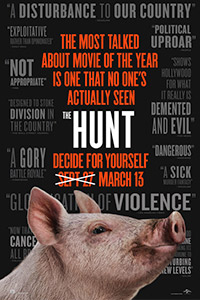 Some talented people have assembled for the new exploitation movie, The Hunt. Co-writers Nick Cuse and Damon Lindelof, who worked together on HBO’s superb The Leftovers, join a frequent director of that show, Craig Zobel (Compliance, Z for Zachariah), for a story designed to prompt outrage on either side of America’s polarized political arena. A satirical work meant to condemn extreme division (the script’s original title was Red State Vs. Blue State), the story borrows a page from Richard Connell’s 1924 short story “The Most Dangerous Game” and features humans stalking and killing other humans. Audiences have seen this sort of thing before in Hard Target (1993) and Surviving the Game (1994)—two thrillers where the super-rich hunt the homeless for sport—but never driven by such obvious political commentary. It’s a bloody story about left-wing elitists who kidnap a dozen right-wing “deplorables” and proceed to dispose of them with bullets, arrows, landmines, and even nastier tricks. But the intended allegory about the dangers of radical partisanship falls flat, and the script’s many references to George Orwell’s Animal Farm want to be smarter than they are.

Debuting on a Friday the 13th about six months after it was supposed to open in theaters, The Hunt was delayed after the media and President Trump prompted Universal’s pre-release jitters. The mass shootings in Dayton and El Paso raised many questions about the timing of the movie’s original release date of September 27, 2019. But it took Trump’s uninformed tweets to convince the studio to postpone the release indefinitely, despite the fact that the few who were voicing their concerns hadn’t seen the movie. Universal and Blumhouse Productions delayed it, inciting mild uproar among those averse to censorship for any reason. Most exploitation movies would wear such attention as a badge of honor, and sure enough, The Hunt’s new poster features quotes from critics decrying the movie’s subject matter and proclaiming, “The most talked about movie of the year is one that no one’s actually seen.” But the movie doesn’t have anything to brag about; it’s not particularly controversial or transgressive. Had it been released as originally planned, talk about it would have fizzled out by the following Monday. Instead, the last six months have built up impossible expectations for an experience that proves dismissable.

In the movie’s two prologues, we see a text exchange that ends with the line, “Nothing like going out to the Manor and slaughtering a dozen deplorables”—a descriptor borrowed from Hilary Clinton’s speech about the Trump base as a “basket of deplorables” who are “racist, sexist, homophobic, xenophobic, Islamaphobic—you name it.” A few moments later, we have been dropped into a woodland setting with a group of gagged and confused right-wingers. Although the script offers scant details about these characters, their faces are familiar enough: Emma Roberts, Ike Barinholtz, Ethan Suplee, and Wayne Duvall among others. They all stumble in the same direction, toward a Hunger Games-style box of weapons, where they arm themselves and ask surprisingly few questions about where they are or why. One of them puts forth a theory: It’s “Manorgate,” a conspiracy that one-percenter democrats are hunting republicans for fun. All at once, the group is attacked from afar by a relentless barrage. Heads explode and body parts fly everywhere in a gory display. The over-the-top violence is played less for horror than a cheeky comic punchline, as indicated by Nathan Barr’s goofy score. 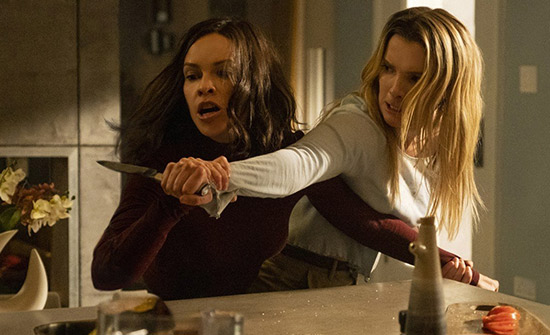 Cuse and Lindelof offer jabs at both sides of this conflict, but the hunters receive the brunt of the critique. Flashbacks to the planning of this event and scenes with the hunters reveal a group of mostly white rich liberals who can barely get through a conversation without remarking about how white people are “the worst” or apologizing because someone “gendered it.” They’re portrayed as ridiculously P.C. snobs who want to wipe the right off the planet, whereas the hunted range from an attendee of Charlottesville’s Unite the Right rally to a podcaster with all the nuance of Alex Jones. And though much the script aims to be an equal opportunity offender, the scenario naturally aligns our sympathies with the underdogs, the hunted. Before long, the action settles on Crystal (Betty Gilpin), a resourceful ex-soldier from Mississippi, who survives the attack through a series of shrewd observations and efficient kills. Crystal doesn’t have much of a backstory and her dialogue is kept to a minimum, but she does offer her mother’s alternative, disturbing take on “The Tortoise and the Hare,” called “The Jackrabbit and the Box Turtle,” that gives some idea of her perspective. Gilpin, best known from Netflix’s Glow, is superb in a Running Man-esque action hero mode, as a character who may not be so deplorable after all.

The Hunt offers two or three sequences that genuinely impress but too few surprises to extend its novelty for the entire 89-minute runtime. I liked the shocking set-piece inside an Arkansas gas station, where the sweet Mom-and-Pop owners (Amy Madigan, Reid Birney) have spun an elaborate spider’s web. I also enjoyed when Crystal starts to fight back against the hunters, especially a sequence where she single-handedly takes on a group holed-up inside a bunker. The finale, where Crystal makes her way to the hunt’s mastermind (Hilary Swank), results in a doozy-of-a-fight—a ruthless hand-to-hand bout where every household object within reach becomes a deadly weapon and no glass door is safe. Zobel and cinematographer Darran Tiernan demonstrate that they’re capable of shooting cohesive action scenes, cut by editor Jane Rizzo as efficiently as Crystal slices through her would-be predators. There’s a shock element at work here too, where the viewer discovers that not all is what it appears; however, the screenplay has only so many twists in store, and none of them are mind-blowing thanks to the spoilery trailers.

Without resorting to a preachy commentary about the need for political temperance (lest we all destroy each other), The Hunt situates itself firmly within the traditions of the exploitative B-movie—a subgenre that uses gleeful violence to poke and prod to earn a reaction, press coverage, and profit on a modest budget. Even so, Cuse and Lindelof dance around the issues to such an extent that some viewers may miss the point. For instance, the curious, mostly unexplained backstory of the movie’s protagonist, Crystal, could have shed some light on the hero’s perspective had it been clarified—as someone who falls in the middle, politically, and therefore sees these events for their insanity. Instead, The Hunt prefers simple labels and broad violence to make its point, which is not an inherently flawed approach—the aforementioned Hunger Games series did that well. However, the attempt here leaves the viewer wishing the material took greater risks and tried to challenge its audience with its overly familiar Orwellian parable.