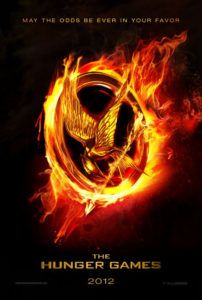 The Hunger Games marks the emergence of another young adult book series that’s been transformed into a filmic event. Situated somewhere between the epic status of J.K. Rowling’s Harry Potter series and the teen-girl fandom of Stephanie Meyer’s Twilight books, author Suzanne Collins’ trilogy represents a surprisingly grim dystopian tale with significant emotional pull and socially relevant issues pervading the subtext. Two-time director of Pleasantville and Seabiscuit, Gary Ross chooses his projects sparingly, and he leaps into this filmic franchise with much enthusiasm, delivering a workmanlike adaptation that will entertain those unfamiliar with the books (if only because they’ll have fewer quibbles about the book’s translation to film) and certainly please most readers. It’s a strong first entry to what will become a cinematic occasion in the coming years, but it’s not without some considerable flaws.

Set in a post-apocalyptic world at an unspecified future date, the story’s events occur in North America, which is now called Panem, a country separated into thirteen districts and ruled by the elitist Capitol. Some time ago, District 13 led a rebellion against the Capitol and was destroyed for their defiance. As a result, the Capitol now maintains order by reminding the other twelve districts just who’s in control via a televised fight-to-the-death gameshow. Each year, two contestants from each district—one male and one female, both between the ages of 12 and 18—are chosen at random as “tributes” to participate in “The Hunger Games”. Each of the 24 tributes is placed inside a strictly controlled arena, and audiences throughout Panem are forced to watch and cheer as children slaughter each other to survive. From the dead rises a sole victor, who is thusly celebrated as a hero and lavished with a life of relative luxury. That’s the idea, anyway.

In the pitiable, coal-mining village of District 12, when everyone gathers to watch the tributes chosen at random for the 74th Annual Hunger Games, spokesperson Effie Trinket (Elizabeth Banks) draws 12-year-old girl Primrose Everdeen (Willow Shields). Without hesitation, Prim’s 16-year-old sister Katniss (Jennifer Lawrence, perfectly cast) volunteers in her place, knowing her sibling would have little chance of survival. Katniss at least has some sense of the wild, as she sneaks off to hunt with a bow and arrow alongside her friend and could-be lover Gale (Liam Hemsworth). For the male, Effie draws the name of Peeta Mellark (Josh Hutcherson), a quiet baker’s son. Before long, Katniss and Peeta are whisked off to the Capitol for training with Haymitch Abernathy (Woody Harrelson), District 12’s resident Hunger Games winner and a reckless drunk to boot. The District 12 tributes are dolled up by stylists led by designer Cinna (Lenny Kravitz), made to impress a panel of judges with their skills, and presented on a televised interview with on-air personality Caesar Flickerman (Stanley Tucci). 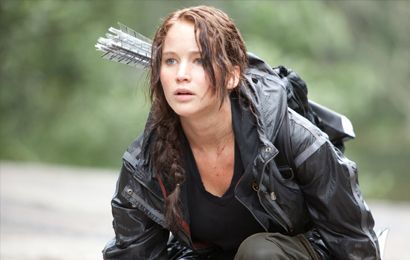 In the translation, unavoidably, Collins’ first-person narrative loses its ability to get inside Katniss’ head as unequivocally as in the book, even though Collins herself contributed to the script (Ross co-wrote, reworking the first draft by Billy Ray). Readers will note how in the book, there was a clear disconnect between what Katniss shows to the outside world and what she thinks, so knowing the character well becomes one of the film’s major flaws. Short of moody narration, replicating the first-person account becomes almost impossible on film; thus, Ross cannot be blamed entirely. What the film does well is making a comparison between the spectacle of the Hunger Games and modern America, how we collectively remain distracted by entertainment and overstuffed on food while the government does its business, diverting us with the occasional bit of propaganda. As the old Latin saying goes, “panem et circenses,” or give the masses bread and circuses, and they will be happy. Such was the philosophy of ancient Rome with their gladiatorial exhibitions. See how well it worked out for them?

Presiding over this glorified deathmatch is gamesmaster Seneca Crane (Wes Bentley, behind a swirly beard) and the brooding Capitol overseer, President Snow (Donald Sutherland, wonderfully slithery). Seneca remains in a high-tech control room, unleashing fireballs or rabid hounds at his will (both rendered with poorly executed CGI). The entire game is orchestrated as the tributes are unleashed on one another in the opening “bloodbath”, and Katniss’ survival skills are put to the test. She and Peeta eventually form an alliance and, vying for the audience’s favor, fake a romance, only Peeta isn’t faking. But what about Gale? Indeed, a love triangle on par with the Twilight series is hinted at, although, unlike that series, everyone here has bigger things to worry about than their love life. Like someone trying to kill them to survive. The script doesn’t dwell much on the love triangle, or much of anything, actually. A few omissions from the book aside, Collins and Ross have crammed everything into the 142-minute runtime, which breezes by, and, before you know it, the film is over all too soon.

Much concern has been voiced by readers about the PG-13 rating and its inability to allow the bloodshed written about in Collins’ book. Ross’ film is not, unlike the book, a gory tale, although the violence is implied through trembling camerawork and choppy editing that communicate a violent atmosphere in the area. Violence in cinema is like sexuality, in that we don’t always need to see every detail for the director to get the point across, but Ross’ solution creates the film’s biggest downfall. Cinematographer Tom Stern’s use of wobbly hand-held cameras makes every action scene feel incoherent, and the few stable scenes feel less than grandiose. Moreover, Ross’ editors (Stephen Mirrione and Juliette Welfling) refuse to dwell on any shot for too long. Important scenes cut to something else before we know where we are, and so the whole film feels rushed. Had this been a three-hour film that lingered on those significant moments just a little longer, audiences would have more to cling to. As is, from a technical standpoint, Ross’ production creates an emotional disconnect. 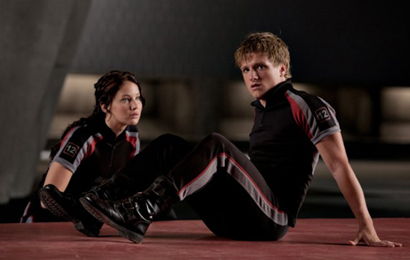 Fortunately, Ross’ casting is better than his visual approach. Lawrence plays a character quite similar to her Oscar-nominated role in Winter’s Bone: a self-reliant young woman who is wise beyond her years, but in another way, she’s completely naïve to how Peeta and Haymitch have resolved to “play the game” by manipulating the audience. As these films inevitably continue, Katniss’ character will hopefully deepen, and Lawrence’s performance will, in turn, grow more complex; for that, we must be excited. Here, she fills her role with a confidence that’s admirable. Harrelson and Sutherland embody their roles through and through, while Hemsworth, in his handful of scenes, seems rather one-note. Away from family adventures like Journey 2: The Mysterious Island, Hutcherson proves here (as he did in The Kids Are All Right) that he’s a talented actor capable of nuance. Overall, the cast was selected with care, and though they may not have the prestige of a Harry Potter ensemble, each performer disappears into Collins’ world.

As the first film in a franchise that will hopefully mature as it goes, The Hunger Games is a respectable beginning, comparable to the generic quality of Harry Potter and the Sorcerer’s Stone or Chamber of Secrets, but lacking the visual panache that would be found later in that series. The script and cast fulfill their duties and adapt Collins’ book well, except Ross was perhaps the wrong choice as director. His technique is simply too rapid-fire and without a desirable sense of grandiosity; his special FX (such as the fire on Katniss’ “girl on fire” costume) look cheap. With any luck, distributors at Lionsgate will assign another filmmaker (or, at the very least, a cinematographer who doesn’t rely on Shaky-cam) to helm the sequels. Nevertheless, the film’s flaws do not outweigh the strength of Collins’ fully intact story structure, which thrusts forward with momentum and a quality that instantly draws in the audience. Whatever objections one might have about the execution, it’s a compelling story that’s been made into a serviceable film.