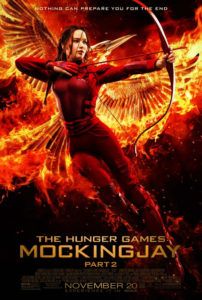 “Meet the new boss, same as the old boss.” That lyric from The Who’s “Won’t Get Fooled Again” kept running through my head after The Hunger Games: Mockingjay Part 2, a stunning and decidedly grim finale to Suzanne Collins’ dystopian young adult series. Based on the third and final book in Collins’ trilogy, Mockingjay was broken into two films, Harry Potter and the Deathly Hallows-style. Part 1 concentrates on the way propaganda sways the masses on both sides of the fight between the Capitol, an evil empire, and the Rebellion, headed by an underground army. What comes as a shock is how the Hollywood adaptation has maintained many of the most controversial and un-commercial elements of the story, delivering a narrative with themes of terrorism, violence as entertainment, entertainment as propaganda, and altogether devoid of nationalistic heroes. Most of all, the film underscores how figureheads are just that, and our deeply felt human emotions are all that matter.

Behind the camera on both Catching Fire and Mockingjay Part 1, director Francis Lawrence brings his strong, workmanlike craftsmanship to the aesthetic presentation. Lawrence, production designer Philip Messina, and cinematographer Jo Willems collaborate once more and again evoke scenes from the book just the way the reader imagined them. Peter Craig and Danny Strong are credited to the screenplay, whereas Collins herself receives a curious credit for the “adaptation”—meaning she oversaw how her one book was split into two films. By design, this appropriately bleak installment has none of the lush greenery or bright outdoor settings of its predecessors, which of course were not so much real as simulated within the context of the story. The color palette here recalls the former District 12, adopting the muted grays of rubble and empty façades inside the Capitol’s ornate concrete jungle, the colors reflecting the dour mood of self-sacrifice and hopelessness of the story. To be sure, any conceivable victory for our heroine means a painful sacrifice of some kind. 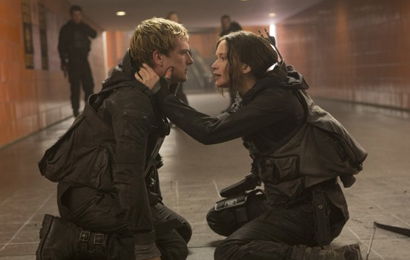 This deliberately paced, incredibly gloomy chapter in the book-to-film series picks up where Part 1 left off, with bow-wielding rebel symbol Katniss Everdeen (Jennifer Lawrence) recovering from a near-death attack by her Hunger Games co-survivor, Peeta (Josh Hutcherson), who has been brainwashed—programmed by the Capitol to hate and if possible assassinate Katniss. For the time being, however, Peeta’s behavior draws her back to the other corner of her love triangle alongside Gale (Liam Hemsworth), the military man who just wants to protect her. Ever behaving with a naive, even selfish view of morality in the face of the survival of her loved ones, Katniss now gets some perspective. She vows to kill the Capitol leader, President Snow (Donald Sutherland, with his devilish, Cheshire grin), while some of the rebellion’s tactics seem questionable. Meanwhile, the rebel leader, President Coin (Julianne Moore, excellent), believes Katniss has served her purpose as a rallying emblem; she also believes Katniss represents a danger to her own status as future leader of their world, Panem.

Along with a handful of compatriots, including Gale, Peeta, a “propo” film crew, and a military escort, Katniss sneaks into the Capitol with plans to put an arrow into Snow’s head. But Snow has prepared his city for a rebel invasion by evacuating much of it, and then allowing his gamemakers to populate every block with elaborate booby-traps, like something out of a televised battle royale. Though Mockingjay Part 2 might be considered a war film given the setting and extensive warlike violence, there’s a quiet in intimate character scenes between Katniss and Gale, or Katniss and Peeta. James Newton Howard’s otherwise overextended and over-dramatic score recedes in these intimate scenes and helps bring the film to an emotional resolution. Hutcherson is particularly good in his conflicted role, unsure whether his memories of Katniss are implanted Capitol lies or reality. Throughout, he recalls some cherished moment from an earlier film and asks, “Real or not real?”

The concept of a character scarred by such events is a main theme in Collins’ books, and it finds a place in the films too, although debatably less pronounced. Katniss is a hero who fights for what she believes, and for much of the series her choices seem to serve the rebellion’s purpose. For her, it’s never about more than keeping her friends safe and taking revenge on Snow. Lawrence delivers a powerful performance, capturing Katniss’ inner turmoil, as she cannot protect each one of her friends no matter how hard she tries. It’s a devastating performance that, in one particular scene in the aftermath, brought this critic to tears. Full of fury and emotional devastation, Lawrence reminds us why she deserves the attention showered on her talent. Indeed, Woody Harrelson, Elizabeth Banks, Stanley Tucci, and Philip Seymour Hoffman (in his final screen appearance, his absence clear in one particular scene involving a letter) all reprise their roles in one of the most perfectly-cast book adaptations in recent memory. 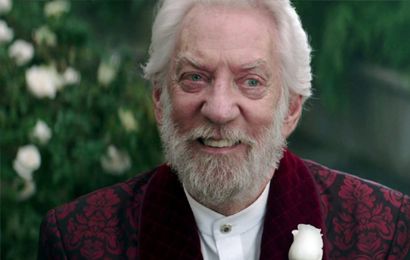 On another level, the film can be savored for its raw thrills, including a number of CGI-heavy action sequences. Nearly the entire film is comprised of a raid on the Capitol, and those gamemakers don’t make it easy. One booby trap involves machine gun turrets, thousands of gallons of oil, and deadly wire traps. When Katniss’ crew makes their way through the sewers, they’re pursued by frightening subterranean creatures, like something out of The Descent (in the book, they were mutated dogs similar to those at the end of The Hunger Games, but the film’s monsters are far scarier). The $150 million production spent its budget well, as everything onscreen looks top-notch. And while some may balk at Mockingjay Part 2‘s extended finale (not unlike The Lord of the Rings: The Return of the King), with its two complete endings, these are scenes direct from Collins’ book and should be welcomed by her readers.

Mockingjay Part 2 and its immediate predecessor, though based on many a fan’s least favorite of the three books (by contrast, Mockingjay was my favorite), advances young adult fiction into something more thoughtful than another Divergent or Twilight series. Collins conceives punishing ideas about Katniss’ mental state in the aftermath of the rebellion. And while the character may not end up as charred and scarred as the book’s Katniss, the emotional scars are apparent. She survives trauma but lives with a nasty case of PTSD, and in turn, the film confronts viewers to consider how violent entertainment for escape or propaganda leaves a mark, whether you see evidence of that mark or not. With its thoughtful themes and superb execution, The Hunger Games series ends strong and overall is Hollywood franchise filmmaking at its best—offering audiences a series that remains consistent through four entries, and a sum that’s greater than its individual parts.