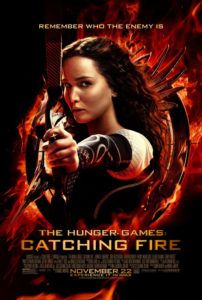 After director Gary Ross’ The Hunger Games, a serviceable adaptation of Suzanne Collins’ first book in her dystopian trilogy, Lionsgate’s franchise improves upon the original and deepens in every conceivable way with the first of three planned sequels, Catching Fire. Thankfully tossing Ross aside for director Francis Lawrence, the elaborate blockbuster production boasts visual stability, both by correcting Ross’ frustrating shaky-cam style and by instilling Collins’ severe socio-political themes into the proceedings with an appropriately dour color palette. Lawrence also benefits from a more eclectic and mature cast of actors, the obvious standout being Jennifer Lawrence as the story’s besieged hero, Katniss Everdeen, but also Philip Seymour Hoffman’s entrance as an enigmatic gamesmaster. All of these elements come together in a film that will not only avoid the previous film’s scathing indictments from Collins purists, but incites justified cheers and sighs of relief from the books’ readers and non-fans alike.

Distinguishing Catching Fire from its predecessor, the film tone contains every ounce of emotional consequence that was missing from The Hunger Games, resulting in an air of grim tragedy and lingering emotional scars—a prelude for the wounds to come. The picture opens some months after the original, with Katniss back home in her mining village of District 12 and beset by traumatic memories of her kills in the Hunger Games arena. She’s visited by the reptilian President Snow (Donald Sutherland), who confronts Katniss about how she and her on-stage lover Peeta (Josh Hutcherson) defied the Capitol by threatening suicide via poison berries, forcing the Capitol to announce two winners instead of the customary one. Such insolence has transformed them into living symbols of a revolution that’s boiling under the surface across Panem, whereas Katniss and Peeta have maintained their act was merely out of love. Both could be true. With a victors’ tour to the Districts planned for Katniss and Peeta, Snow warns that more displays of rebellion could result in their families being punished. 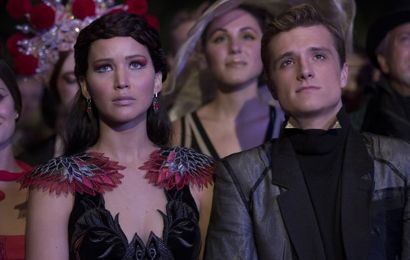 “Must be a fragile system if it can be brought down by a few berries,” Katniss remarks, ever unaware of the power behind her words and actions. And she’s right. The Capitol relies on a balance of fear and hope; too much of either could destabilize The System. The Hunger Games provide heroes to worship and an escape for Panem, but they’re a grim and careful reminder of the Capitol’s power. Snow charges new, supremely confident gamesmaster Plutarch Heavensbee (Hoffman) with killing Katniss in such a way that will remove her power as a beloved symbol of the rebellion, but without dispiriting the populace enough to incite a frenzied uprising. Plutarch adds what he calls a “wrinkle” to this year’s games: In celebration of their seventy-fifth anniversary, Snow announces the contestants will be made up exclusively of previous winners, meaning the soon chosen Katniss and Peeta must face-off against a slew of proven killers, not just young, unwilling participants subject to torture for mass consumption.

Coached by charming buffoonish and oddly noble drunk Haymitch (Woody Harrelson), the team from District 12 must make alliances to survive. Katniss’ choices fall almost exclusively to underdogs, such as the bookish Beetee (Jeffrey Wright), shell-shocked Wiress (Amanda Plummer), or the elderly Mags (Lynn Cohen). More useful are the attractive and dangerous axe-wielding Johanna (Jena Malone) and pretty-boy Finnick (Sam Claflin). All the while, Katniss prepares herself for the inevitable moment when she and Peeta will have to turn on their allies to stay alive. But before any killing in the tropical arena, there’s dancing and food and dresses with no limit of absurd extravagances. A significant difference between The Hunger Games and Catching Fire is how much further the latter film goes to portray the Capitol as lavishly over-the-top, with Stanley Tucci in wonderfully overblown gameshow host mode as Caesar Flickerman. Costume designer Trish Summerville brings Collins’ incredible descriptions of Capitol fashion (a key facet in the books) to stunning life here, delivering costumes made from feathers, butterflies, and smoldering fire—all far more beautifully realized than the disappointing styles represented in The Hunger Games.

But then Lionsgate spent an extra $50 million on this sequel (bringing the budget to a reported $130 million) after the original grossed upwards of $691 million worldwide. Every dollar is up on the screen, bringing out the dichotomy of the Capitol and the Districts through careful detail. Lawrence has proved himself worthy of large-scale productions, demonstrated in Constantine and I Am Legend; but he’s also a capable handler of high drama (see Water for Elephants). In Catching Fire, those qualities reach equilibrium through incendiary rabble rousing and an exciting finale inside the game arena, rendered in desperate crowds battling with armed guards and the wild CGI effects (deadly mist, crazed baboons, and stories-high waves) inside the arena. Throughout, we feel a growing sense that the games themselves are less significant than what’s going on in the Districts. Katniss feels it too, and Lawrence follows Collins’ first-person narrative and never divulges too much, leaving us contained within Katniss’ hard-headedness, desperation to protect her family, and her fluctuating affections for Peeta and her District 12 sweetheart Gale (Liam Hemsworth). 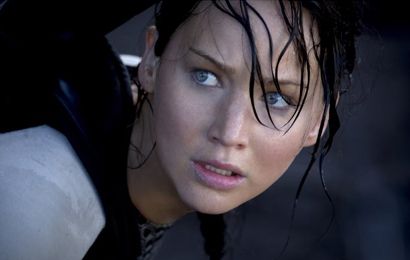 But the director’s control is most evident in his cast of Oscar winners and burgeoning talent. Lawrence’s turn as Katniss is heartbreaking, filled with despair and rage; one dares wonder if she’s ever been better. Her breakdowns impressive and icy resolve melted, she commands the screen with her character’s tough-as-nails persona giving way to the psychologically devastated young woman underneath. Together with Hoffman, she shares a mysterious dance scene where their characters exchange cryptic, fascinating dialogue which only actors of their caliber could deliver with such disciplined restraint. From Hoffman’s detached confidence to Malone’s fiery discord to the singularly despicable Commander Thread (Patrick St. Esprit), the film’s new cast demands celebration. The returning cast—Harrelson, Hutcherson, Sutherland’s menacing presence, Tucci’s hilariously cartoonish performance, and Elizabeth Banks’ PR-obsessed visual orgy Effie—are uniformly strong, while The Hunger Games carried a few clumsy young actors, their characters are all dead now.

By the end of Catching Fire, the viewer is bound to make unavoidable comparisons to The Empire Strikes Back, the somewhat anticlimactic film’s climax setting up the two-part finale Mockingjay (due in fall 2014 and summer 2015), à la Harry Potter and the Deathly Hallows or Twilight: Breaking Dawn. But similar to The Empire Strikes Back, the darker themes and danger result in a superior melodrama, leaving us to feel helpless to the narrative’s drive and considerable stakes. Where The Hunger Games shocked its audience with the notion of child violence, an existential dilemma takes precedence in Catching Fire and showcases Collins’ story as a cautionary tale, not a thrilling action movie or light teen entertainment. As a powerful indictment of entertainment as propaganda, the film considers political, social, and emotional factors that transcend the limitations of a young adult novel and will, like its hero, hopefully, go on to represent something much more significant.