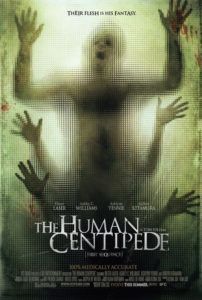 Notable only for the sheer oddity behind its concept, The Human Centipede (First Sequence) is not a horror movie that wants to scare you. Instead, it wants to leave you with a sense of revulsion. It hopes to disgust you to the point that you’ll want to tell your friends how nauseating the experience was, so then they’ll see it too. Aside from imagining how horrible the events therein would be, it doesn’t make you think, and it implies no greater significance than an elaborately designed “yuck” response. And despite the buzz both the movie and its writer-director Tom Six have received since its arrival on the horror festival scene, it’s a trite and one-dimensional movie with nothing to offer beyond its grotesqueries.

While on vacation in Germany, American tourists Lindsay (Ashley C. Williams) and Jenny (Ashlynn Yennie) find themselves with a flat tire in the middle of nowhere. They seek shelter at a secluded residence in the woods, home of Dr. Heiter (the creepy Dieter Laser), a top surgeon in the field of separating conjoined twins. But he has new surgical interests now. Soon enough, the women are drugged and tied up in Dr. Heiter’s ominous basement medical lab, along with another soon-to-be victim, a Japanese tourist (Akihiro Kitamura). Together, the three abductees act as components in Heider’s insidious master plan: the creation of a Human Centipede by connecting three human bodies from mouth to anus. Joined by their gastrointestinal tract, and enduring no end of torturous pain and degradation, the connected victims, whose knees are sliced to keep them on all fours, ingest the feces of the individual in front of them and in turn “feed” the person behind them.

The shocking imagery notwithstanding, to call the scenario Cronenbergian, as many critics have done, would be a mistake, because David Cronenberg (The Fly, Videodrome) uses bodily horror to make some larger statement or metaphor. There doesn’t seem to be any allegory or meaning involved in Six’s story, aside from the usual sicko-plays-god-to-exact-his-power-over-his-victims nonsense that every serial killer or mad scientist movie employs. He doesn’t say anything about society or even about the state of horror movies today. The movie avoids really engaging the medical monstrosity at its center; it prefers to linger on nasty provocations that serve only to madden the viewer with their outrageousness.

The movie poster makes a “100% Medically Accurate” claim that deserves skepticism. But once you’ve accepted how bizarre this German doctor’s twisted plan really is, there’s not much else to cling to. The movie falls back on some atrocious formulas, namely using the tired old horror device of idiotic American tourists, present in everything from Psycho and The Texas Chainsaw Massacre to Touristas and The Ruins. Lindsay and Jenny are two of the dumbest movie protagonists in recent memory, even for your standard thick-headed movie bimbos. Audiences might find themselves yelling at the screen for the mistakes these two make, the first being taking shelter from a visibly weird German guy who, before he lets them into his home asks, “Are you alone?” Why, so you can sew us together, mouth-to-anus? Well then yes, we’re alone. Or later in the movie, the human trio gets the jump on Heiter, knocking him out cold. But instead of finishing him off, they make a moronic horror movie mistake and inch away at a human centipede’s pace, leaving him alive to follow.

This movie is more about looking than, say, action or suspense. Almost nothing happens except enduring the victims’ endless agony and humiliation. The filmmaker wants us to look upon the Human Centipede with equal parts wonder and terror, as we would a freak show attraction or pornography or a snuff film. And under the surface exists an undeniable hint of sexuality (read the poster’s other tagline: “Their flesh is his fantasy”), the same kind of perversion that helped coin the phrase “torture porn”—visual and sexual associations through deplorable acts of violence and torture. Heiter’s victims, connected by orifices, become one being in their conjoined form, and there’s something very organic, if unnatural, about the way it looks: as though we’re watching some other species copulate. The effect on the viewer is a sadomasochistic one and proves unsettling to be sure. Which, of course, is exactly how Six wants us to feel.

In that respect, one cannot deny that Six’s approach is successful. Successful, but not admirable. Just like Eli Roth did with Hostel, this director resorts to some very standardized stuff in terms of plot and presentation to depict his horrifying imagery. His frame is comprised of primarily medium to wide shots, with occasional close-ups on wounds and stitches, so audiences can consume the situation in total. What’s more, the imagery has no purpose except for us to revel in the audacity of its peculiarity, to goad us, or perhaps even arouse us. The director offers up a modern Dr. Frankenstein, one whose collectively nude (save for bandages) creation has almost no sympathy with the audience and does little more than cry for help. Midway through the movie, after the victims have been connected, they remain static characters defined only by their muffled cries.

However capable he may be with capturing surgical torture, Six wastes an opportunity to use his horrific idea to say something, and therefore his movie plays like a sideshow attraction. The Human Centipede holds great possibility and squanders almost every ounce of it on cheap awe tactics. It’s grotesque solely for the purpose of being grotesque. The sad thing is, some audiences want to be shocked by such nonsense. Knowing this, IFC picked up the independent production for distribution because they knew it would make people talk. And sure, people are talking, but all they’re saying is that the movie is disturbing. Any hack horror guru can be disturbing. But it takes a true visionary (directors like David Cronenberg, John Carpenter, and George A. Romero) to turn that disturbing content into something smart. Tom Six is no visionary, and his movie is far from smart.