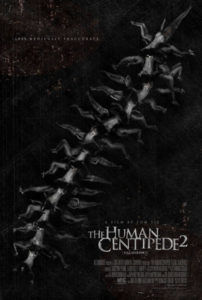 Writer-director Tom Six did not conceive The Human Centipede 2 (Full Sequence), the sequel to his original torture porn gross-out from 2009, to shock or scare the average moviegoer. The film was conceived to stun the most desensitized horror aficionado, viewers already bored from unhealthy doses of violence after years of too many Hostel and Saw movies. For everyone else, the resulting display may be so over-the-top that it’s impossible to watch. After all, the UK censorship board, so offended by what they had witnessed, banned the movie. Didn’t they learn from rock ‘n’ roll that when they ban something, it only makes the population want it more? Indeed, their actions have only drawn more attention to Six’s production, and in turn handed the film’s distributors at IFC a priceless (anti)promotional campaign that will assure the movie’s profitability on late-night theatrical runs and home video.

Recalling Wes Craven’s meta-ready approach to New Nightmare and Scream 2-4, Six’s sequel posits that The Human Centipede (First Sequence) was just a movie, whereas this one takes place here and now. Six removes (or attempts to, anyway) the safe illusion of cinema and establishes a “real-world” setting, in which the horror element should, in theory, be heightened because our usual defense that ‘this is just a movie’ has lessened. To convey this reality photographically, cinematographer David Meadows lenses in rich monochrome, the only admirable quality about the production. Strange how black-and-white brings a sense of realness, whereas color feels artificial in comparison, isn’t it? What Six doesn’t make believable is his plot, his actor’s performances, or really any element of his mise-en-scène, which he clearly put some thought into—which is to say, more than the original.

What little story there is follows mental case Martin (“performance artist” Laurence R. Harvey in a dialogue-less role), a bloated, slow-witted weirdo who lives with his shrill mother (Vivien Bridson) in a dank London flat. Damaged by a predictably abusive childhood and questionable psychiatric help courtesy of Dr. Sebring (Bill Hutchens), Martin works in a parking garage and keeps a scrapbook of his favorite movie, none other than The Human Centipede. Being an obsessive fan, he’s compelled to gather together 12 victims and connect them all mouth to anus, more than one-upping the experiment originally carried out by Dieter Laser’s eerie Dr. Heiter. Meanwhile, between soiling himself and dreaming about his sexually abusive father, Martin stages a fake audition with Quentin Tarantino for Ashlynn Yennie, the actress from The Human Centipede (the one on the end). Martin picks her up at the airport, and before long she realizes she will not be meeting QT. Of course, since Martin is more than a little “off”, he doesn’t have the medical precision to carry out the task with Dr. Heiter’s expertise, leaving his unfortunate subjects in rough shape after he sloppily assembles them with a staple gun and duct tape.

Believe it or not, some horror fans complained that Six’s first movie wasn’t gory enough—that it was more about a psychological yuck-factor that sheer blood-and-guts. For those sickos, Six has responded with a series of brutal, disgusting scenes barely softened by the lack of color. As much as the black-and-white photography may avoid showing globs of red stuff, Six employs juicy sound effects and close-ups on oozing blood to weaken our stomachs. In one scene, Martin smashes in his mother’s head with a crowbar, sets her crushed-head corpse down at the kitchen table, and enjoys a meal. Worse, Martin voyages into severe grotesque territory when he injects his chain-linked victims with laxatives; you can imagine the result. Worse still, there’s a regrettable birth sequence involving a dead child. Transparently, every moment tries to top the last, as the audience can sense Six trying to outdo himself as the movie progresses.

That Six thinks The Human Centipede was powerful enough to invoke this kind of reaction (even in a head-case like Martin) testifies to his incredible, misguided ego. Had another filmmaker written and directed the sequel, its conceit might be somewhat forgivable. But given the film’s self-referential, self-important concept, it’s clear Six thinks his work is important. Then again, at one point, the duct tape from one of Martin’s victims comes loose, allowing the poor bastard to shout “Goddamit, it’s a film! It’s a fucking film!” Perhaps I’ve got it all wrong and Six isn’t a provocateur—perhaps he’s really attempting to argue that those who enjoys such films, or take great offense to them, have a screw loose. Whenever a particularly controversial film is released, censorship advocates debate about the effect of violence in the media shaping our youngsters. The counterargument is always that “individual results may vary”, meaning that any normal person could watch Natural Born Killers or Basketball Diaries and handle it; but a disturbed person might respond with a Columbine-esque outburst.

Whatever nonsensical artistic rationalization Six uses to justify The Human Centipede 2, the result leaves you feeling empty and flat, if annoyed by its lack of consequence. After all, this film was banned in at least one major country; shouldn’t it be more confronting? Yet, it plays no differently than any of the stupid, schlocky horror titles released every year. The target demographic of horror fans (all others should stay away) have undoubtedly seen worse. Moreover, much like the first one, the sequel fails to incite even the slightest emotional response, aside from disgust. The most offensive aspect proves to be how hard Six tries to provoke his audience—not to mention how obvious his intentions are, and how miserably he fails. Too contrived and deliberate to be genuinely terrifying, this exercise in sadism should be dismissed as artistic (a term used reservedly) masturbation from a writer-director who loves his own creation far, far too much.