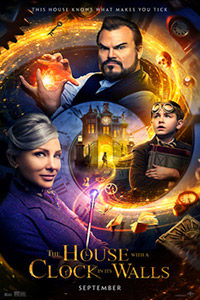 When we’re children, we want to be scared. Maybe it’s a part of an implanted biological survival mechanism that, as we grow up, we yearn to explore the things that scare us, to acclimate and overcome those fears so that we develop into well-adjusted adults. If children never take those steps, chances are they become fraidy cats. The House with a Clock in Its Walls offers such an opportunity. It provides a few scares and spooky moments to toughen kids’ skin, without drenching them in nightmare fuel that scars them for the rest of their lives. Based on the 1973 novel by John Bellairs, the young adult author who specialized in tales of wizards and haunted mansions, the film has the family-friendly quality of Hocus Pocus (1993) or Goosebumps (2015). Distributed by Universal Pictures, it finds an appropriate equilibrium between frightening moments and comic relief to diffuse the tension. Though the production succeeds at its tonal balancing act, it bears an unfortunate over-reliance on special FX and has a familiar plot. Overall, it’s a modest entertainment some families will enjoy.

Produced by Amblin Entertainment—the Steven Spielberg-founded company whose heyday in the 1980s brought us E.T. the Extra-Terrestrial (1982), Joe Dante’s Gremlins (1984), and Richard Donner’s The Goonies (1985)—The House with a Clock in Its Walls has a similar raison d’être. Amblin titles had an enchanted quality in how they treated children like grown-ups, igniting the imaginations of youngsters with all manner of fantastical or scary situations. Amblin’s often PG-rated fare pushed the boundaries of the MPAA’s rating system, and Spielberg himself famously convinced the censor to instill the PG-13 rating after some complaints about the intensity of Amblin productions. After all, Amblin had a steady troop of directors versed in horror. Spielberg got his start with The Duel (1971) and Jaws (1975), Dante debuted with Piranha (1978), and Donner’s first major feature was The Omen (1976). And so their willingness and ability to scare their younger viewers was perhaps more advanced than other filmmakers. Accordingly, oversensitive parents are bound to complain that The House with a Clock in Its Walls should be rated PG-13.

Set in 1955, the story follows newly parentless 10-year-old Lewis Barnavelt (Owen Vaccaro), an introvert with an affinity for dictionaries, as he catches a bus to New Zebedee, Michigan, to live with his estranged uncle, Jonathan (Jack Black), whom Lewis has never met. A self-proclaimed “black swan” of the family, Jonathan, a kimono-wearing oddball, escorts Lewis to his new home, an ornate and ancient-looking estate somehow settled in Midwestern suburbia. The house is an oversized cabinet of curiosities, full of stained glass art, creepy wind-up dolls, Victorian furniture, and more clocks than any sane person requires. It doesn’t take long for Lewis to learn that his uncle is actually a warlock—or “boy witch”—who, along with his purple-obsessed next door neighbor, Florence (Cate Blanchett), practices magic on the regular. Jonathan and Florence have an affectionate banter throughout the film, exchanging dull insults in a manner amusing only to them. They also whisper about the secrets of the house, which they poorly manage to keep from Lewis.

After a short time, Lewis begins to study magic to become a warlock and, along with his status as an orphan and an outsider at school, resembles Harry Potter more and more. J.K. Rowling evidently read Bellairs, as similar to Potter, Lewis faces a shadowy nemesis in Isaac Izard (Kyle MacLachlan). As the elaborate backstory explains, Izard, much like Voldemort, earned himself a dirt nap after dabbling in the dark arts—he made a blood oath with an ancient, nasty demon in the Black Forest, at the height of his service during World War II. Eventually, our young hero inadvertently resurrects him, and the zombified Izard, joined by his wife Selena (Renée Elise Goldsberry), intends to bring about the apocalypse using a supernatural clock. The clock, of course, is hidden in the house where Jonathan and Lewis now live. And once Izard returns, an army of possessed pumpkins and maniacal dolls answer to his command.

Aside from the grim plot machinations, the film spends a lot of time with Lewis at school, where he desperately tries to earn the friendship of a little jerk, the wannabe class president Tarby Corrigan (Sunny Suljic), while he also endures no end of mockery from his peers. Fortunately, his home life, regardless of the doomsday threat, has its upsides. A cartoonishly wacky uncle played by Jack Black seems like a 10-year-old’s dream. And who wouldn’t want to live next to Cate Blanchett? But then there’s the house, which is alive with paintings that move and inanimate objects that respond to commands. A doglike armchair that woofs and begs appears when the story needs an injection of cuteness. An ongoing, albeit unfunny dynamic involves a living hedge sculpture of a winged lion that poops dirty leaves onto various characters, inciting Jonathan to shout, “In the litterbox, please!” This tiresome running gag, present throughout the film, also appears over the end credits—a gross miscalculation on the filmmakers’ part.

Following the tradition of horror directors turned Amblin-brand childhood imagineers, The House with a Clock in Its Walls finds gore guru Eli Roth restraining his penchant for buckets of blood and gratuitous violence. The director of the torture porn flick Hostel (2005), a cannibalism nightmare called The Green Inferno (2015), and this year’s remake Death Wish (2018), Roth has made a career of reveling in extreme horror. His usual style is moderated to conform to the material, working from a script by Eric Kripke (TV’s Supernatural). The result is technically proficient, as his films usually are, with only a few noticeable missteps. Take MacLachlan’s voice after his character is resurrected from the dead; it’s replaced with a filter no more convincing than a voice machine from a Halloween shop. A few of Selena’s CGI transformations look distractingly cheap as well. Mostly, Roth injects some imagery that looks more frightening than the tonally lighthearted material allows it to be. Roth’s work here is occasionally fun and not quite scary, and its genial characters divert our attention, though they don’t leave a lasting impression.