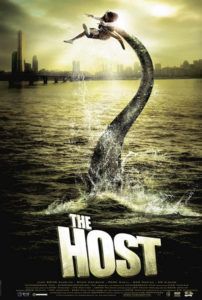 Bong Joon-ho’s The Host will forever raise your expectations for monster movies. It’s a unique mix of blockbuster entertainment and anti-government social commentary. It drips with top-of-the-line special effects, an off-beat sense of humor, persistent family themes, and significant remarks on the futility of governmental reliance. As a result, it penetrates like few others of its kind. Curiously, Bong based The Host in part on fact. The first scene shows an American mortician at a U.S. military facility in South Korea who orders a Korean subordinate to dump an obscene amount of old formaldehyde down the drain. The chemicals flow into Korea’s Han River, corrupting Nature and giving birth to a mutant monster—an agile, fishy quadruped creature larger than an elephant and with an appetite for people. Use your imagination to guess which part of the scenario isn’t real.

The monster emerges from the river and causes chaos throughout Seoul, and even kidnaps a young girl. In the aftermath of its attack, the city fears contagion from a virus the U.S. government claims the monster carries. Quarantining the Han in a lackluster fashion, neither the U.S. nor the South Korean government efficiently handles the situation, leaving it up to the kidnapped girl’s family to get her back. Park Gang-du (Song Kang-ho, star of the phenomenal Sympathy for Mr. Vengeance and J.S.A.: Joint Security Area) is the narcoleptic father of the kidnapped girl, Park Hyun-seo (first-time actress Ko Ah-sung). Gang-Du, his father, his unemployed brother, and his sister (a bronze medal-winning archer) band together to rescue Hyun-seo. For fear of spreading the supposed infection, the family is held captive in a government hospital. When all reasoning with the government and hospital officials fails, the family escapes and sets out along the quarantined Han River to kill the mutant beast—all the while attempting to avoid government authorities.

Granted, the actual events on which the film was based never generated a monster or virus, but in 2000, a U.S. military mortician was found guilty for ordering his Korean assistant to dump expired formaldehyde down the drain. Even though the American mortician was found guilty, he never served time or was punished for what he did, much to the chagrin of South Koreans. The film depicts some understandable antagonism toward the U.S. government because of these truths. But the audience doesn’t face bombardment by exclusively anti-American criticism. The South Korean government is just as ineffectual, taking every hint from the U.S. without any real autonomy. Every attempt either government makes to eliminate the monster or contain the disease results in a foul-up or a lie. 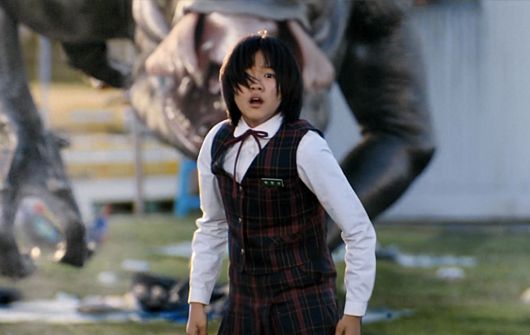 The story’s two governments relate directly to the opening sequence with the American mortician and the Korean attendant: The South Korean government takes orders, in a way, from the Americans; we see this as local citizens protest the U.S.’s decision on how to deal with the virus and the possible infection. The South Koreans grudgingly go along with U.S. virus propaganda and even a plan to absolve the Han with “Agent Yellow” (a direct reference to Agent Orange). The director takes a shot at all governments for dismissing the voice of the people—the humanist argument—in a crisis. But this social commentary doesn’t flood the film. Instead, Bong places it under the surface of an exciting and emotionally involving blockbuster. Breaking box-office records in South Korea, Bong optimizes the film’s impressively small $10 million budget (which is a huge sum for a South Korean film) in every way. The Host has the look and special effects of a movie eight times its cost.

The story’s center remains the family: how they keep together through desperation and love, and how they persevere through tragedy. Bong sketches a loveable but broken group. I was struck by the film’s attention to character development, as most American blockbusters (especially American monster movies) lack the kind of sensitivity present here. Character development and appraisals of government policies make up the film’s themes, but the surface consists of a gripping horror picture. One scene shows the kidnapped Hyun-seo, left in the inescapable lair of the beast, watching as it brings back more victims on which it occasionally feeds. As she’s small enough to hide from it, she avoids becoming a snack, but that only means she must observe as the creature vomits up the bones of its victims. Bong contrasts those horrific images with the film’s subtle, sometimes infrequent humor, which is quirky but admittedly absent from the picture’s second half. If he kept the humor throughout, the film wouldn’t have ended on such a grim note or proved so moving.

The Host closes with a solemn scene somewhat uncharacteristic next to the happy endings usually found in a movie like this one. It will throw off some viewers at first. But after you mull over the content, you’ll find that the finale concluded the film justly, ending just as a story about a monster born from bureaucratic ignorance should end. One could argue that the entire film is atypical; it tells a conventional story through unconventional means. The Host may seem familiar in the first half-hour—so familiar that it demands comparisons to Jaws (1975)—but it grows beyond a single genre or traditional blockbuster entertainment by including a political editorial alongside a brisk creature feature. The payoff comes when you leave the theater after just barely hanging on the edge of your seat for two hours—and wouldn’t you know it, you have something to talk about with your fellow moviegoers.