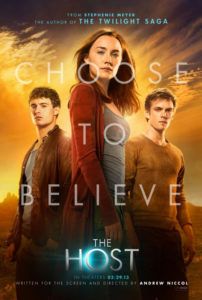 Another film adaptation of a book by Twilight novelist Stephenie Meyer, The Host occupies a familiar schema where a central female protagonist spends the entire narrative in turmoil as she pines over two hunky young men. Meanwhile, the fantasy world around her has bigger things happening; in this case, an invasion by an advanced alien parasite race. Just as Meyer had defanged vampires and werewolves in her popular book and film series, she removes nearly all the juicy genre elements from this science-fiction yarn in place of a dull teen love story. Imagine a dime store romance version of Invasion of the Body Snatchers and you’ll get the idea. Talented filmmaker Andrew Niccol, creator of the superb Gattaca, proves his disappointment In Time wasn’t just a fluke with yet another dreadfully written but sharp-looking film that fails to adequately explore either its characters or the specifics of its concept-driven world.

Narration explains how Earth has ostensibly lost its struggle against the alien invaders long ago; and so the film begins with the aliens in control, having bettered our planet by restoring the environment and bringing peace through cold assimilation. Only a few human rebel stragglers remain, hiding out in secret. Much like the sparkly vampires of Meyer’s creation, the aliens, called “Souls”, look like fragile glowing bundles of fiber optic cable and seep into the human brain when an incision is made in the back of the neck. Humans with a parasite in them can be spotted by their silvery glowing eyes. This process of symbiosis begs the question: Which came first, the chicken or the egg? Which is to say, how did these delicate glowing parasites, which ride to Earth in silver football-sized pods, take over? Unlike, say, the Philip Kaufman version of Invasion of the Body Snatchers (1978), where parasites travel on solar winds and infiltrate us through invisible microscopic particles, the Souls must be implanted. Given this, how did their takeover occur? Throughout the film, I kept wondering how creatures that require surgery to bond with their host bodies occupied the won’t-go-quietly human race. Alas, that question is never answered.

Within Meyer’s brand of storytelling, it seems a requirement that we accept nonsensical plot silliness in service of an even sillier romance. The story begins when human rebel Melanie Stryder (Saoirse Ronan) is captured by a “Seeker” (Diane Kruger) while trying to distract the alien scouts away from her little brother Jamie (Chandler Canterbury) and boyfriend Jared (Max Irons). Melanie’s body becomes the new home of an alien entity named Wanderer, but when Wanderer awakes, she (for lack of a better pronoun) comes to find Melanie’s consciousness is still inside her head, resisting. What follows are endless sequences where Ronan must stand there and deliver Wanderer’s dialogue, while she also completes Melanie’s portion of their conversation through voiceover. Even a versatile actress of Ronan’s caliber—having starred in Atonement and Hanna—cannot make these scenes interesting. The fault lies on Niccol, who not only directed but adapted the material for the screen. There’s nothing more un-cinematic than a character having what is basically a one-way conversation with a voice inside her head. If Niccol had chosen to show Melanie, either “inside” Wanderer’s head or perhaps as Wanderer envisioned her, these scenes might’ve had a similar dynamic to Gollum’s multiple-personality moments from The Lord of the Rings Trilogy. But no such luck.

The story proceeds when Melanie exerts mental influence over Wanderer and forces her body to escape and look for Jamie and Jared. When she eventually finds them living in a dissident culture in the mountains with her uncle Jeb (William Hurt), the Melanie part of her wants Jared, while the Wanderer part of her is interested in one of Jeb’s loyalists, Ian (Jake Abel). What’s a girl to do, follow the human voice trapped inside her head or the alien voice, also inside her head? Cue several “I’m of two minds about it” remarks. Questions about which guy she should kiss are absurd, and yet they’re foundational to The Host, a film in which nothing much of anything happens. The plot does not move in a forward direction; rather, Melanie’s vocal presence comes and goes when Niccol finds it handy, as Wanderer waits around for humans to trust her. At the same time, Seeker badly wants to track down Melanie/Wanderer and begins to lose her alien cool in the process, but too little is made of this character’s motivations to sufficiently draw our attention. It all ends with a decidedly bothersome solution to the love quadrangle by dreaming up a maddeningly convenient way out.

Name any of Niccol’s films and you’ve selected a picture with a sense of visual craft and technical control. The Host is no exception, boasting a crisp, antiseptic sci-fi visual design comprised of elegant architecture, slick silver-plated vehicles, and clean lines. Contrast the film’s alien culture with Jeb’s cave abode, a kind of underground farmland where everyone wears tattered clothes and uses the same community water hole to wash up. Cinematographer Roberto Schaefer shoots these opposing environments beautifully, even if the designs themselves weren’t all that inventive of production designer Andy Nicholson. But it’s Niccol’s treatment of the source material that fails to render the screen story in a cinematic way. Aside from Ronan and the moody presence of Hurt, the cast of young actors doesn’t impress (their performances prove unintentionally funny by the time the second kiss in the rain occurs). Blame the source material if you must, as Meyer isn’t known for her sophisticated prose or intelligent plotting. But Niccol, a capable if derivative director, hasn’t done much to improve the author’s teen melodramatics beyond their sappy and predictable limitations.