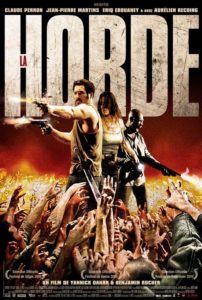 The Horde is a French zombie movie imported by IFC Films for release in the U.S., and it comes with a lousy English dubbed soundtrack. It played at several horror film festivals throughout Europe and earned a healthy theatrical run in France. The credits acknowledge five screenwriters, who will go unnamed in this review, and two directors, Benjamin Rocher and Yannick Dahan, to accomplish the finished product. Given the quality of the story, it’s easy to question why it took so many to produce the result, especially when the plot feels merely like a lost episode from the videogame Left 4 Dead. When movies start reminding us of videogames, it’s not a good sign for the state of today’s cinema.

A band of detectives out to avenge a fallen comrade head into a violent section of Paris, to a rundown building where Nigerian gang leader Adewale (Eriq Ebouaney) remains entrenched. They enter the building only to find themselves taken prisoner by Adewale’s men. All seems lost until suddenly a zombie apocalypse breaks out, forcing the cops and criminals to team up for survival against snarling, flesh-hungry zombies with super strength. There’s no explanation as to what caused the zombie outbreak, but by the large explosions in the distance that reveal all of Paris in ruins, the characters quickly proclaim it “Judgment Day”. From there, it becomes a race for dear life as the survivors attempt to make it out of the ramshackle building alive, each of them flexing their unbending machoness along the way. What they plan to do when they escape the building and are outside with thousands of zombies, they never say.

For zombie movie buffs, the undead move with the breakneck speed of those from the Dawn of the Dead remake. Somehow they’re faster and stronger than the survivors, though, despite being dead. They roar like wild beasts and kill indiscriminately, and yet the survivors seem completely unaware of how to kill them. When discharging umpteen bullets into the torso of a flesh-eating corpse, if it’s still coming for you, wouldn’t you try putting one in the head? It takes these characters so ridiculously long to figure out that a headshot will kill a zombie, or that a zombie bite means the victim has only a short time before becoming a zombie themselves. Haven’t these people ever seen a George A. Romero movie? How tiring it is to watch so many recent zombie movies where the characters have no idea what they’re dealing with. Rule of thumb, the audience shouldn’t be that much smarter than the characters.

However, the filmmakers have clearly studied their genre attentively, as every other scene offers some pilfering from this or that genre picture. Take the soundtrack by Christopher Lennertz, which sounds too-close-to-be-a-coincidence like John Murphy’s memorable score from 28 Days Later. Or consider how the entire setup feels like a more elaborate version of Night of the Living Dead, with a mixed bag of survivors in close quarters contending with each other’s egos while fighting off a zombie onslaught. But the filmmakers forgot to make any of the characters likable or even minutely sympathetic. They’re all stubborn jerks, and our only consolation as viewers is this hopeless situation from which these awful people will probably not escape alive.

By the time the finale comes, Rocher and Dahan forget about their own set of agile zombie rules, as lone cop Ouessem (Jean-Pierre Martins) scrambles atop a car while around him hundreds of undead capable of sprinting at high speeds prove that they’re apparently incapable of climbing after him. Mere inches out of reach, he stands safely away from the zombies and goes to town with a barrage of bullets and swipes from his machete. This, along with a dozen other inane action sequences from the movie, demonstrates the kind of mindless setups the audience must contend with. The movie is more about supplying zombie gore than telling a story or making a commentary, which is how directors Romero and Danny Boyle used the genre.

If there’s a purpose beyond gratuitous bloodshed, this critic didn’t find it. Sure, there’s a mild social message about the lower class gangsters having just as much honor as the uppity cops, but why should any of that matter once the gunfire begins? Perhaps the English dubbing takes something away from the experience, although doubtless even the original French would make the characters in The Horde more likable. Rocher and Dahan have little grasp on how to involve their audience in the terror, so instead they resolve to put forth a splatterfest of gore and mean-spirited characters who yell every line of dialogue. This pointless, angry little import is another example of how the zombie genre has taken a harsh nosedive in recent years—one from which it will take something seriously innovative, like 28 Days Later or Shaun of the Dead, to revive.