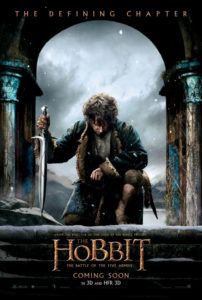 Journeying there and back again with Peter Jackson’s three-part adaptation of J.R.R. Tolkien’s book The Hobbit has been filled with ups and downs for many, as the first two entries, The Unexpected Journey and The Desolation of Smaug, divided even steadfast fans of Jackson’s The Lord of the Rings films between equal measures of enthusiasm and utter indifference. With the final installment of his second trilogy, which has been some thirteen years in the making, Jackson stumbles over his feet near to the finish line on The Battle of the Five Armies. Already stretched to its limit thanks to Jackson and his co-writers Fran Walsh, Philipa Boyens, and Guillermo del Toro turning a 300-page book into over 7 hours of screentime (more, if you count the preferred Extended Editions), this final entry feels almost entirely invented from scratch. After all, Tolkien’s battle scenes were not the whimsical entertainment that we’ve expected from Jackson but were contained within a few short pages and summaries.

Originally titled There and Back Again, The Battle of the Five Armies runs 144-minutes and stands as the shortest of Jackson’s Middle Earth films. No doubt the title changed to accurately represent the content and better market the actionized finale, in which hugely populated battle sequences occupy most of the runtime, probably by design. After all, it’s the last chance for Warner Bros. and New Line Cinema to earn a massive box-office take from Tolkien’s saga. And what better way to counteract complaints about boredom from the first two Hobbit films than with an all-out war movie? To be sure, here’s a film interested in little else beyond CGI characters and monsters smashing into one another or actors exchanging dialogue in front of obvious green screen technology. Jackson replaces his usual sense of majesty and epic-sized panoramic shots with an unwavering fondness for chaos and battlefield mayhem.

Jackson’s editor Jabez Olssen seems so rushed to get to the titular battle that early scenes in Laketown, where the fire-breathing dragon Smaug (voice of Benedict Cumberbatch) has launched the attack promised by the cliffhanger ending of The Desolation of Smaug, feel cut short. Indeed, much of the build-up to the battle feels rushed as well, leaving whole character arcs and subplots unresolved, motivations unexplained, and when compared to the two films preceding it, strangely off-kilter as a whole. After fulfilling his destiny and dispelling with Smaug, the Bard (Luke Evans) struggles to reorganize his people and find them shelter in the only natural spot nearby, Erebor. But inside the Lonely Mountain’s dwarf kingdom, now unoccupied by Smaug, Thorin Oakenshield (Richard Armitage) has grown mad with goldlust. While jealously protecting his newly recovered cache, he and his fellow pack of 12 dwarves search for the Arkenstone. Little does he know that the party’s Hobbit burglar Bilbo (Martin Freeman) took it, having suspected Thorin might go mad for the treasure.

Elsewhere, the wizard Gandalf (Ian McKellen) fights off the weakened evil Dark Lord Sauron alongside elvish Queen Galadriel (Cate Blanchett) and white wizard Saruman (Christopher Lee); though, as we learn later, they could have done a better job of it. Gandalf soon arrives at Erebor to find forces amassing against Thorin, who grows increasingly paranoid with each passing moment and refuses to pay promised treasure to those who deserve it. Woodland elves led by the moody Thranduil (Lee Pace) and Iron Hills dwarves led by Dain Ironfoot (Billy Connolly) prepare to attack one another, while another two armies of varying orc types approach, each led by nasty-wasty baddies Bolg and Azog the Defiler. Jackson also tosses battle-bred bats, various trolls, goblins, and giant underground worms into the mix, but they’re all just throwaway creatures to artificially increase the stakes. Once they, along with the Bard’s human group, start fighting one another, there isn’t ample screentime to make any one group feel adequately represented. Fortunately, the action has been delivered with such speed and basic entertainment value that it’s difficult not to lose oneself in the action.

Characters feel underdeveloped and seem present simply to engage in mindless, one-note fighting, complete with Jackson’s fun-loving touches of comic relief to lighten the proceedings (overcooked are the comic moments surrounding Laketown’s top brownnoser Alfrid (Ryan Gage)). Important characters who would seem to play crucial roles in the final film are lost in the fray once the quinate forces clash. For example, our eponymous hero gets conked on the head and remains on the sidelines for much of the action, and the other dwarves (besides Thorin) disappear from the screen for about an hour. The film all but forgets about the much-sought-after Arkenstone, not to mention the white jewels coveted by Thranduil. What becomes of Dain Ironfoot? What fate befalls Tauriel (Evangeline Lilly), whose tragic love of dwarf Kili (Aidan Turner) leaves her lost? Why does the screenplay invent mommy issues for archer-elf Legolas (Orlando Bloom)? All are valid questions, and all remain unanswered by the end credits.

This critic avoided 3D and Jackson’s underwhelming 48-frames-per-second HFR presentations, and I enjoyed my standard format version instead. While Jackson usually specializes in impressive displays of visual audacity, the director and his cinematographer Andrew Lesnie do not inspire on a technical level. Actors are clearly standing in front of green screens throughout; and worse, the filmmakers fail to instill an iconic or instantly memorable sequence that sets this sequel apart. The Unexpected Journey boasted an encounter with trolls, a game of riddles with Gollum, and a singing Goblin King; The Desolation of Smaug featured Mirkwood spiders, a barrel ride down a river, and Bilbo’s exchange with Smaug. But nothing from The Battle of the Five Armies stands out like those sequences; when it’s over, we’re left struggling to recall what happened over the last 2-and-a-half-hours of endless swordplay.

Beyond letting audiences down with the final entry of six, Jackson doesn’t meet his own high standards and treatment for the Middle Earth saga up to this point. It’s all very surprising and a little confusing given how consistent the other five films have been; in fact, The Battle of the Five Armies feels like it was helmed by a less talented director than Jackson. Nevertheless, despite these justified complaints, returning to Middle Earth and being in the company of Bilbo, Gandalf, the fiery Tauriel, and even that sourpuss Thorin again has its own charm. Regardless if they’re all reduced by the limited runtime, simply watching these beloved characters’ stories play out has a distinct appeal. At the end of this theatrical trilogy, our only consolation is that the Extended Edition will probably resolve some of these rather terminal issues of lacking drama with (hopefully) anywhere from 30-45 minutes of character development added from the cutting room floor. Here’s hoping the Extended Edition feels like another film altogether.