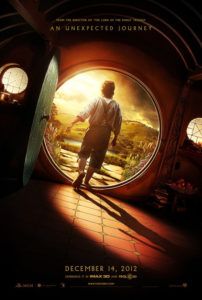 In The Hobbit: An Unexpected Journey, Peter Jackson returns us to the world of J.R.R. Tolkien, and it’s like taking a welcome trip back to a fondly remembered place in our cinematic memory. Almost ten years after his final entry in The Lord of the Rings trilogy, Jackson’s team revisits Middle Earth to embark on another series of adventures inspired by Tolkien’s single volume of The Hobbit, or There and Back Again. And rather than a stand-alone film with a self-contained story, Jackson has established the first remarkable piece in a planned prequel trilogy, the director’s liberty with the source material dividing Tolkien’s many devoted fans. Accusations of bloated runtime and self-indulgence overlook the magic and enchanting detail of Jackson’s filmic embrace of Middle Earth. Moreover, for many moviegoers, no single component of this new trilogy will feel entirely complete until they can view it in its full trilogy form. Nitpicks aside, Jackson has launched an impressive expedition for which I am unabashedly on board.

Much like The Fellowship of the Ring, An Unexpected Journey opens with a prologue detailing the background stakes, which involve a dwarf empire ejected from its home in the Lonely Mountain by the arrival of the fire-breathing dragon Smaug. Two generations later, a band of thirteen dwarves led by proud kingly hier Thorin Oakenshield (Richard Armitage) join the wizard Gandalf (Ian McKellen) to reclaim their home. Their missing element remains a burglar who can stealthily sneak into Smaug’s chamber. Gandalf, in his cunning wisdom, arranges for the dwarves to convene at the home of Bilbo Baggins (Martin Freeman), a homebody hobbit wary of anything new, especially the dangers of adventure. Nevertheless drawn into their company as their burglar (a task at which he has no experience), Bilbo remains an outsider in the group as their quest begins, and in the film’s narrative arc he must prove his worth within a gang of warriors and hardened dwarves. Along the way, they face iconic scenes from the book, including a run-in with a trio of flesh-eating trolls, capture by the grotesque Goblin King (voiced by Barry Humphries), and a fantastically rendered game of riddles with a cave-dwelling Gollum (motion-captured Andy Serkis).

Almost instantly in the prologue, those versed in Tolkien will recognize how Jackson and the screenplay’s co-writers Fran Walsh, Philippa Boyens, and Guillermo del Toro have reformatted the original children’s storybook mannerism to marry with the more sobering tone of The Lord of the Rings trilogy. Tolkien’s The Hobbit was a lighter and easier read, whereas his trilogy proves a dense and often darker voyage. They’re making a proposed trilogy out of a single volume, after all, which unavoidably means the writers have elaborated upon the source material. Then again, given the storybook quality of The Hobbit, a lot happens in a lesser number of pages, allowing Jackson to give each of the book’s rather condensed scenes appropriate breathing room. Of course, Warner Bros. and MGM’s decision to extend The Hobbit from the originally planned twofer into a prequel trilogy cannot help but inflame bitter recollections of what happened when George Lucas opted to make a prequel trilogy to Star Wars. And depending on your familiarity and devotional level to Tolkien’s book, this creative decision may be suspect, making the film seem overlong if only for the studio’s financial gain. On another level, one can understand Jackson’s desire to spend as much time in Middle Earth as the studio allows, it being such a gorgeous and lovingly imagined fantasy world.

As far back as 2008 in the development stages, Del Toro (Pan’s Labyrinth, Hellboy) had been assigned the director role alongside Jackson, then just a producer. This was during the prolonged sale of MGM, a deal so protracted that Del Toro eventually bowed out after continuous delays. The originally proposed project would have been two films, the first a self-contained adaptation of The Hobbit and the second a film bridging Del Toro’s world with Jackson’s existing trilogy. We cannot help but wonder how The Hobbit would have been different in Del Toro’s hands. Would the film have felt perhaps more appropriately distinct from Jackson’s trilogy, or contained a Del Toro-esque storybook quality that may have better suited this particular adaptation? Such questions are pointless now, because what we are left with is another wowing Peter Jackson film set in the filmic universe he introduced us to all those years ago. In another controversial decision, Jackson chose to shoot the film at 48 frames-per-second for 3D, a choice that has once again divided many. This review pertains to a standard presentation in 2D at 24 fps.

Jackson orchestrates several scenes that channeled my own memories of Tolkien’s book, as they’ve come to life exactly as I imaged Jackson would film them. The scenes in the goblin caves, for example, are so thrilling in their frenzied terror, the Goblin King so disgusting and terrifying, that I felt like a child again experiencing this story for the first time. Seeing Gollum, brought to life with CGI bettered by ten years of development, challenge Bilbo in the riddle sequence, brought a new sense of fear for the character that immediately enhances what we know of him from The Lord of the Rings trilogy. All the while, McKellen’s endearing presence as Gandalf and the pitch-perfect casting of Freeman as a younger Bilbo (Ian Holm’s original, older version appears early on in the prologue) fully immerse us in Jackson’s world. If one must quibble, it would be about the anonymity of several dwarf characters. Among the thirteen are a select few who have defined personalities, Thorin being the standout. James Nesbitt’s turn as the friendly Bofur and Ken Stott’s aged storyteller Balin also make an impression. The others have two more chapters in which to pronounce themselves. Before the journey begins, nearly an hour is spent developing some of these characters and enriching their histories, although, just as with the theatrical version of The Fellowship of the Ring, I wanted more (perhaps a problem corrected on an inevitable “Extended Edition” video release?).

The tone employed early on is somewhat lighter than The Lord of the Rings films, offering several moments of comic relief with the slapstick dwarves, but Jackson maintains his dramatic airs for Tolkien’s world throughout, with foreboding toward the two forthcoming sequels and the desperate times shown in The Lord of the Rings. Howard Shore’s excellent score also helps transport us back into this world musically. Along the way, we’re warned of a human conjurer calling himself The Necromancer, who, in reviving ancient evils, makes Gandalf and members of the White Council wary, with references to Mordor and Witch Kings promising dark times in the future. The film ends with a goosebump-inducing teaser of Smaug, who is never witnessed in full view. In this sense, much of An Unexpected Journey may feel like mere setup with the promise of more on the horizon. As such, arguments against the runtime and pacing have no place in a review of the first chapter in a trilogy. There’s much more to come, and those who balk at the film’s length haven’t prepared themselves for the journey.

Although mine is a minority opinion on this point, Jackson and company’s extending of Tolkien’s book never drags or feels overlong during its two-hours-and-forty-nine-minute runtime. This is a cinematic world so fully realized that leaving it is a sad prospect. If the sequels—tentatively titled The Desolation of Smaug (due 2013) and There and Back Again (due 2014)—live up to or prove even better than An Unexpected Journey, Jackson will have achieved another legendary series of motion pictures. This also makes writing about An Unexpected Journey at this stage a somewhat difficult notion. Distinct though The Fellowship of the Ring, The Two Towers, and The Return of the King may be, they were all parts of a greater whole that arguably transcends any requirement for individual examination. It’s like assessing the first hour or so of Lawrence of Arabia, but not seeing the rest except in increments over the next couple years. As a result, initial reactions have been divisive; however, we cannot yet consider An Unexpected Journey in the full scope Jackson intended. For that, we must have patience, because we may not truly grasp this film until 2014 when we sit down for a marathon of the entire Hobbit trilogy. So, until we can see the full project in its three-part entirety, this first entry has sharpened my interest and satisfied my Tolkien cravings with Jackson’s superior creativity and vision.