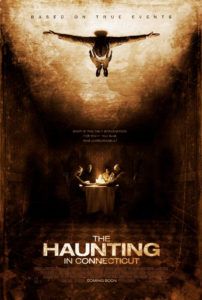 The Haunting in Connecticut might offer the occasional jolt, some creepy imagery, and maybe even a moment or two of genuine fright, but the production resorts to ghost movie clichés that audiences have grown accustomed to over the years. That the film is based on supposedly true events, a claim that just makes us more skeptical, only hurts the final product. We watch with one eyebrow raised as it becomes obvious Hollywood has concocted this horror yarn without the slightest regard for what really happened, which I suspect was much less eventful.

The Campbell family rents a home close to a hospital in Connecticut, where the teenage son Matt (Kyle Gallner) can receive his cancer treatments. Sara (Virginia Madsen), the mother, sounds like a commercial when she finds the house both “spacious and affordable,” but she wonders what the catch is. She finds out when Matt begins having bizarre hallucinations about past tenants, a mortician who conducted group séances on the side. She believes her son’s medication is causing his paranormal delusions, but a dying priest (Elias Koteas) confirms their house is evil and attempts to exorcize their property.

To believe there’s any truth in the concept of Hollywood’s “based on the true story” ploy is like a bank trying to cash your check with Monopoly money. When they hand you the wad of blue and pink bills, you just look at them dumbfounded and ask, “Are you serious?”  Yes, the studio is quite serious, at least about getting you into the theater to see what “really” happened. They were serious back in the 1970s with The Amityville Horror and The Texas Chain Saw Massacre, and again more recently with their remakes. And they’re serious about continuing the trend of the “true story” across all genres to customarily deceive you for commercial purposes.

The problem is that fact in such a film as this is nonexistent. Beyond the basic setup of a family renting a haunted house, that’s probably where the reality ends. Hollywood sets themselves up to fall since they boast authenticity and instead deliver just another cookie-cutter chiller. We buy a ticket with the understanding that there’s some basis in truth, but of course, the real story has been reformatted and repackaged by experts in movie magic. So, perhaps it’s our own fault for buying the ticket and expecting anything less than total fiction.

That stated, Peter Cornwell raises his film above your customary horror fodder by presenting a tight family unit we actually care for. He gives his characters ample time to grow, and the performances by Gallner and Koteas are better than you’d expect for a haunted house movie. The rest of the cast falls into the realm of standardization, with Madsen as your typical protective mother, and Martin Donovan as an alcoholic husband strumming his electric guitar when he feels sorry for himself. We’d prefer none of these characters died, but that’s the most feeling you should expect.

What doesn’t work is the family’s religious beliefs. The entire group prays before meals and remains heartily Christian. There’s no skeptic to say ghosts do not exist, only to then be proven wrong within the film. Consider the lack of spiritual faith in The Exorcist, the most successful horror film ever made; even the priest doubts the existence of God, but then the horrible events of the film make the characters into believers. That film denies the existence of the supernatural, forcing that unknown element to break through our disbelief and scare the hell out of us. Unfortunately, no one doubts the haunting in this film, and so the story remains an ineffective fantasy, which, I believe, is exactly what the filmmakers didn’t want.