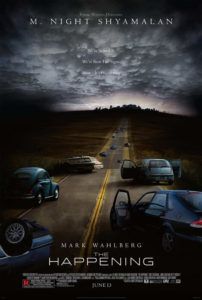 The Happening is the latest from director M. Night Shyamalan. The film is neither exciting nor involving, though it’s being widely advertised as a grisly R-rated thriller—Shyamalan’s first foray into non-PG-13 territory. He rips the concerning disappearance of honey bees straight from the headlines, resolves they were the target of an “unexplained act of nature,” and considers the possibility that humans might become a similar target.

But when the affected area spreads from cities into rural neighborhoods and along the countryside, the likelihood of terrorism lessens. It’s suggested that plants might be releasing a toxin to eliminate their enemies, namely the environment-unfriendly human race. Since the poisons are carried by the wind, Elliot and his group run from gusts of air, making for none-too-thrilling chase sequences that lack a visible pursuer. As silly as running from nothing sounds, the film is stricken with the director’s admirable but failed devotion to his otherwise fascinating idea.

Shyamalan’s overbearing sense of gravity weighs down every scene with an overt importance, and he fails to make us care in the least, resulting in a false (almost embarrassingly so) significance from scene to scene. And what’s worse than Shyamalan’s seriousness?  His sad, pathetically quirky attempts at humor. Take the Nursery Owner (Frank Collison) that gives Elliot and Alma a ride after their train stops in the middle of nowhere; the character is a plant nut also obsessed with hot dogs… yes, hot dogs. I imagine the character needed some sprucing and Shyamalan figured Why not hot dogs? Such idiosyncrasies feel desperate and are painfully out of place, generating the undesired at, not with, laughter.

Generally, over-the-top talent is wasted performing in Shyamalan’s standard low-key tone and severity. His characters are so unnaturally frigid and unresponsive that we begin to wonder if he slipped his actors Valium before shooting. Wahlberg is best barking out hostile attacks in The Departed, fanatically discussing unjust politics in I Heart Huckabees, and playing dumb in Boogie Nights and Three Kings. Here he’s trying to sound intelligent, delivering Shyamalan’s awkward dialogue that even Lawrence Olivier couldn’t master, and looking uncomfortable and unbelievable in every scene (except the one where his character calls himself a “douche bag”). Same goes for the usually hyperactive presence of Leguizamo, whose dial is turned down below audible. And Deschanel’s role is limited to wide-eyed looks of awe and fear and happiness, each indistinguishable from one another in her overly discreet performance. Shyamalan’s usually appropriate ominous temperament fails because miscast actors populate the credits.

And now I must address a particular issue raised by several critics (you know who you are), namely those who would claim Shyamalan mirrors Alfred Hitchcock in style. Perhaps there is a superficial plot likeness between The Happening and Hitchcock’s The Birds, in that a natural, inexplicable phenomenon terrorizes the East Coast. And aside from his Bernard Herrmann-inspired music selections, that’s precisely where the comparisons should end.

Shyamalan fails to involve us by his exclusive concentration on shock value—creating eerie images, one after another, of victims mindlessly killing themselves. His films are wholly reliant on revelatory twists. These moments are shocking, to be sure, but not necessarily suspenseful. Shyamalan’s suspense resides in the unexpected or the unknown, a surprise. Hitchcock’s approach is best explained in his decisive interview with François Truffaut, where he compares his approach to the placement of a bomb:

“There is a distinct difference between ‘suspense’ and ‘surprise,’ and yet many pictures continually confuse the two. I’ll explain what I mean: We are now having a very innocent little chat. Let’s suppose that there is a bomb underneath this table between us. Nothing happens, and then all of a sudden, ‘Boom!’ There is an explosion. The public is surprised, but prior to this surprise, it has seen an absolutely ordinary scene, of no special consequence. Now, let us take a suspense situation. The bomb is underneath the table and the public knows it, probably because they have seen the anarchist place it there. The public is aware the bomb is going to explode at one o’clock and there is a clock in the decor. The public can see that it is a quarter to one. In these conditions, the same innocuous conversation becomes fascinating because the public is participating in the scene. The audience is longing to warn the characters on the screen: ‘You shouldn’t be talking about such trivial matters. There is a bomb beneath you and it is about to explode!’”

Since his first success back in 1999 with The Sixth Sense, an overrated ghost movie if there ever was one, we’ve expected surprises and twists from Shyamalan. He seems increasingly bent on dropping plot bombshells that, I think, he’s forgetting about narrative. He forgets that tangible characters drive his most successful pictures, like Signs, whereas plot-driven yarns like The Village and Lady in the Water leave audiences shrugging with indifference.

I look forward to each M. Night Shyamalan film, no matter how silly the trailers or how seemingly absurd the plot. At the very least, he will deliver a movie that seems to have control over its formal elements, which in itself is sometimes enough. What Shyamalan has lost in his last several releases is his ability to engage his audience, to write believable characters or dialogue. I hope he finds whatever he’s lost. Some critics praise Shyamalan for his realism and patient storytelling, but I find nothing realistic about The Happening. And that’s not a criticism of his Earth vs. The Earthlings concept, which admittedly is thought-provoking. Rather, I question the authenticity of his forced human interactions, as they lack any semblance of soul.