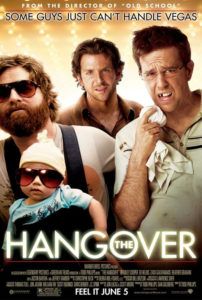 How bad can we be and still get away with it? That’s what the producers of The Hangover asked before they started filming. Turns out, you can get away with a lot in Hollywood nowadays, and most of it appears in this movie. This bawdy, hilarious comedy comes from Todd Phillips, director of Road Trip and Old School, two movies with the same goal as this one: shocking the audience with its assortment of vulgarities and nonsensicalities. Basically, we’re meant to say “What the hell?!” every five minutes, while laughing through the seemingly random string of events that make up the plot.

And that’s actually how the movie plays out, with three guys, the leftovers from their four-person bachelor party, waking up after a wild night in Las Vegas wondering what happened the night before. There’s no sign of the groom-to-be, Doug (Justin Bartha), and the bride-to-be keeps calling for her beau. The last thing any of them remember is taking shots of Jägermeister on the roof of their hotel. After that, everything’s a blur. Maybe they should have known better than to start the night with Jägermeister, a shot that usually marks the end of the evening.

Our three hero characters are generic descriptions, since their antics take center stage. Phil (Bradley Cooper) is a charismatic schoolteacher, and the leader of their group. The fearful Stu (Ed Helms) tells his overpowering girlfriend that he’s going to wine country, and spends the entire movie trying to hide his Vegas lie from her; that becomes pretty difficult when he finds himself married to a stripper (Heather Graham). And the oddball Alan (Zach Galifianakis, who’s wonderfully awkward here) looks like Grizzly Adams and isn’t allowed within 200 feet of a school or playground. You figure out why. What’s natural about this trio is how they interact. The whole male bonding experience is summed up quite realistically, so even though on their own the characters are bland, they’re also more tangible roles than your average yuck fest might offer.

The barrage of sordid clues left behind from a Vegas night worthy of Hunter S. Thompson only distort what really happened: A chicken struts around their Caesar’s Palace villa. One of them wears a hospital wrist band, another has lost a tooth, and the other has no pants. A tiger lazily purrs in their bathroom. In their closet, they find an infant. When the valet brings their car, it’s a police cruiser. And when they eventually find their car at the police impound, there’s a naked Asian gangster in the trunk and he’s not happy. The freakshow continues on, and we wonder how anyone could accomplish all this debauchery is the span of one night. Doug’s future father-in-law (Jeffrey Tambor) might offer the resigned explanation, “It’s Vegas.”

While the concept alone of waking up after a drunken nightmare is riotous, the movie faces the troubling reality that the unknown is much more intriguing than having answers. This is true with any genre, not just comedy. Where The Hangover is concerned, putting together the pieces also ruins the otherwise prevalent sense of obscurity and randomness. Why explain that the tiger came from Mike Tyson’s mansion when it’s more interesting to chuckle in awe over its bizarre presence? Who needs to know the reasoning behind locking a naked Asian man in their trunk? Isn’t it funnier to leave these mysteries as the inexplicable outcomes of their morally irreprehensible escapades?

The humor relies almost exclusively on shock value, so too much plot description might ruin the barrage of surprise laughs for you. Lacking any resonance like a Judd Apatow production might contain, this movie and all of Phillips’ work provides serviceable comedic diversion that once seen should never be revisited. It’s one sickening-yet-side-splitting vignette after another, exploring just how awfully these men have violated themselves and others in their unruly binge. Temporary and fading, it limits itself with its reliance on gross-out humor; once you’ve seen the depravity onscreen, the shock no longer exists, making its rewatchability nil. You’ll laugh a lot the first time you see it, but see it only once. Catch it in the theater, or rent the inevitable Unrated Edition on DVD, but don’t expect to laugh as much the second time around.